July is passing quickly as it’s already week 3 of everyone’s favorite month-long gameathon. #JRPGJuly is hosted by Anne Lee @ Chic Pixel, and RPGamer is showing support for the event by playing some JRPGs. Let’s see how everyone did this week.

My second JRPGJuly title was fairly different from my first — Shining Resonance Refrain! It’s the story of a whiny boy Yuma who lives in a world where dragons disappeared long ago, who thankfully doesn’t stay whiny for long. He’s joined by a cadre of companions (four women and two men) who he can develop relationships with and swap in and out of his party. The writing is top-notch and the relationship system is fun to explore.

In a world where dragons supposedly died out ten thousand years earlier, there’s a whole heaping of dragons in the story: Yuma is the host of the Shining Dragon, all his friends are Dragoneers wielding Armonics (weapons made from the body of dragons), the evil empire has Dracomachina at their beck and call, you need to collect dragon souls, oh, and there are lesser dragons just wandering around waiting to be killed. The plot is pretty darn cliché, which isn’t bad but don’t expect anything groundbreaking.

Combat is action-based, where the player can run freely within a circle whacking at enemies as their action points drain, which can be restored slowly by simply standing still or by casting a spell, using magic points. Conversely, magic points are restored when performing basic actions. Yuma can also transform into a dragon, though this isn’t wise until later in the game when he learns to control the power. There are also songs that can be performed, which can have strong effects on the overall battle, such as decreasing damage taken or increasing the chance of a critical attack.

The game’s biggest flaws lie in its pacing, which is terrible. The first five hours plod, and while it gets better for a small amount of time, it quickly dies again. Characters join the party at a glacial pace, and perhaps most frustratingly, the game fails to explain critically important systems, such as the traits. As you interact with characters you receive traits, which unlock positive boons during combat. But figuring out how they work and how to level them up is left largely up to the player; it’s easy to mess up the system, and some of the best traits are unlocked early in the game, so experimenting isn’t rewarding.

I think the thing that makes me a little sad about Shining Resonance is that it isn’t a bad game, but it isn’t good either. It’s interesting to compare it to my previous game — Odin Sphere — and see where the game kind of went off the rails. The developers opted for quantity over quality and it left Shining Resonance feeling overcomplicated. If you like action RPGs and have ample patience, give it a try, but if your gaming time is limited, there are better titles out there.

Sam was without a computer this week so she’s unable to regale everyone with tales of the boys from Lucis, but she still managed to post a few screenshots documenting their adventures. Apparently, Gladiolus’ bookworm ways are winning over Sam’s heart. 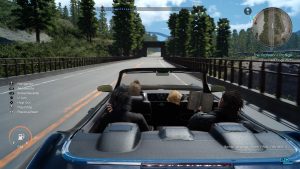 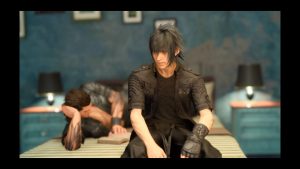 Some sightseeing was done — a gondola ride along the canals of Altissia is a must on any trip to Eos — and what sort of road trip would it be without some souvenirs?

Sam will be back next week with some thoughts wrapping up Final Fantasy XV. Spoiler, I think she’s going to gush about Gladio.

I’m starting to run short of ways to describe how adorable Zwei: The Arges Adventure is; it feels like I’m becoming a broken record. Pokkle and Pipiro continue to be a joy and the NPCs are a lot of fun as well. Whether it’s a princess who built an amusement park that hasn’t had a customer in one hundred years or the self-proclaimed Archduke of Arges who has built an extensive dungeon beneath his mansion because… that’s the logical thing to do if you own a large mansion? It seems the wealthy denizens of Arges have a fascination with building white elephants. Zwei is so entertainingly silly all the time that I just love it. At the rate I’m progressing, I should finish it and have some final thoughts next week.

When I’ve needed something portable to play, I’ve been turning to the new hotness: Octopath Traveler. I don’t have nostalgia for 16-bit RPGs — I was too busy playing Sim City and Wing Commander — so maybe that’s why I don’t seem quite as enamored with Octopath as the broader playing public. That isn’t to say that I don’t like it, but Octopath is falling into the good, not great category so far for me.

It is an incredibly beautiful retro-looking game and the music is fantastic. I really need to buy the soundtrack as there have been several times I’ve left the Switch on so I could listen to the music while I was doing other things. I’m also enjoying the turn-based combat system, which has enough strategy between finding enemy weaknesses and deciding when to use up the extra actions characters build up each turn to keep me interested.

However, I’m OVER random encounters and those — combined with a lack of enemy variety — have made combat less fun than it should be. I will be very happy if I never have to fight another rat archer. I’m not crazy how some identical-looking enemies have different weaknesses; something about that bugs me and I almost wish there were palette swaps. The pacing seems off as well. Octopath appears designed to have players see chapter one of each of the characters before moving on to chapter two for any of them. However, I just recruited the fifth character and my memory of Tressa’s tale (the merchant and character I started with) is already becoming fuzzy. I can’t help but feel that the narrative flow might work better if I could mix in chapters from earlier characters easier. Nonetheless, I’m still chugging along on this one and the good is certainly outweighing the bad. I’m curious to see how this game will hold up for me.

Like seemingly every other RPGamer on the planet, I fell victim to the siren call of Octopath Traveler this week. I’ve put in a cool eight hours so far, having finished the first chapters for five of the characters now. I’ll avoid going into any story details since the game is so fresh, but suffice it to say the game has kept my attention quite easily. I’m finding the writing and voice acting to be fantastic so far, though I notice a tangible restraint in the amount of text. Most villagers don’t have anything to say and story segments seem to move along quickly. It is still a throwback after all, despite the modern niceties. The combat though has a lot more depth than I was expecting. Perhaps there’s a bit too much of it, but I’m not complaining as of yet. The world is huge and I’m looking forward to seeing what adventures lie ahead for the ensemble cast.

In the world of The Alliance Alive, I finally accomplished my goal since the beginning of the game, acquiring the penguin character Robbins. This involved sailing over the dark current filled with water demons, before delving into a dungeon full of said water demons and rescuing Robbins and his son. Robbins thankfully doesn’t seem to be a joke character at all, able to lay the smack down with the best of the cast. Plus he’s a penguin, so that counts for a lot.

I didn’t play a ton of Ys VIII this week, though I’ll get back to it this week. Octopath Traveler proved to be a bit too distracting. That said, I’ve gotten my fourth party member, a disgruntled rifleman finally giving me some party options. My adventures on dinosaur island will continue soon.

Check out Mike’s video where he plays Octopath Traveler!

I am somewhat close to the end of Radiant Historia: Perfect Chronology, as I completed chapter six of the Standard History timeline. I hadn’t realized that I was still in chapter 4 in the Alternate History timeline. The later chapters go by quickly, but it may still take me rest of the month to finish. Where I last left off before writing this, I was traveling through the Abyssia Forest, a place I’ve been to before in the Standard Timeline, in order to reach Forgia, home of the Gutrals. I have just barely started chapter five.

One interesting aspect of Radiant Historia’s world is its version of animal people. Cat folk, canine people (I’m lumping together wolves, dogs, and foxes), and dragon people are the most common types you’ll find in fiction, particularly in JRPGs. I like cats, canines, and dragons, but it’s neat to see a setting do something different. In Radiant Historia, there are the aforementioned Gutrals, which look like upright walking gorillas and Satyros, which are just satyrs with a few extra letters. The Gutrals wear Chinese-style armor, which I find to an interesting and unique touch to their design. I can’t really tell what real-world cultures, if any, the Satyros take after. As is common in JRPGs, there’s quite a bit of fantastic racism going, with humans and the beastkind having a long history of animosity (’cause, you know, humans are jerks).

On a different note, now is as good a time as any to explain the game’s battle system. Radiant Historia is at its heart a turn-based system, but incorporates some unique twists. Battles play out on a grid-based arena. Enemies can be moved around the battlefield using specific skills. One reason to do this is because enemies do more damage up close and pushing them back reduces it. The more important reason is to be able to attack multiple foes at once by moving them to the same space. To achieve this, playable characters can use the Change command to manipulate turn order. I think it’s fun in a puzzle-like way to figure out the best series of moves to have all or most monsters gathered in once place to finish them off. Perfect Chronology adds the support skill system, which allows characters that are not in the current battle to jump in perform a follow-up attack. It can add just that extra amount of damage needed to finish off a group of enemies without having to wait for the next player turn.

I will likely be able to roll credits on Perfect Chronology before the end of July, but looking at the timelines, I have a little more than half of all of the nodes, including the new Possible Worlds ones. So far I’m clearing the ones I can find, but no doubt I’ll need to rely on a guide to get all of them. Either way, it’ll be great to have it all filled out before I put this game away. Let’s see how many I get in the next #JRPGJuly update.

That’s all for this week. Let us know what sort of progress you’re making in your JRPGJuly game in the comments!