Just the Two of Us

Nihon Falcom didn’t rush into making a sequel to Zwei, but seven years later did produce what XSEED Games localized as Zwei: The Ilvard Insurrection. The result is a sizable improvement over the first game and a title that has jumped into what I would deem the higher echelon of the company’s work. Most of the concepts from The Arges Adventure have been refined and made more enjoyable here, though unfortunately The Ilvard Insurrection does not seem to have reached very many people. That’s a shame, considering it’s one of the more charming titles available.

Ragna Valentine is flying through the skies in his newly-upgraded aeroplane, when an attack results in him crashing to the ground on the land mass of Ilvard. This produces a startling lack of injuries upon his rescue, a fact quickly explained by Alwen du Moonbria. She is a Trueblood vampire who made Ragna into her Blood Knight by sharing her life essence, something that also enhances a mortal’s abilities. She didn’t strictly save Ragna in the name of altruism though, as her family castle was recently snatched by unknown parties and she needs assistance to get it back. Ragna happened along at precisely the right time for him to be enlisted in this cause, which also requires Alwen to regain her lost elemental magic abilities. 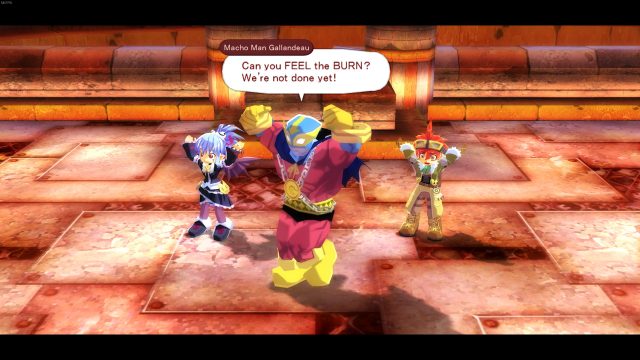 Fortunately for the player’s thumbs, this is not a minigame.

The broad strokes of The Ilvard Insurrection‘s narrative don’t go beyond standard story ideas, but an incredible amount of charm makes it an enjoyable time. Ragna and Alwen aren’t necessarily deep characters, but they’re extremely well-realized and make for a very likable protagonist pair. The nefarious characters seeking to cause mayhem are also a personable bunch. Ilvard’s land mass hosts a number of NPCs who are also entertaining, from a chain-smoking nun trying to hustle people in church to a trio of fairies just trying to find the right place to build their special shop. XSEED’s localization does the game right in a big way, filling the text with witty lines in a script that flows very nicely.

The Ilvard Insurrection‘s setup is similar to that of its predecessor, in which Ragna and Alwen plow their way through multiple dungeons while chowing down on foodstuffs to gain experience and heal. The pair shares a life meter and the player can switch between them at any time, as their combat aptitudes are applicable to different situations. Ragna is a melee fighter while Alwen’s magic allows her to attack at range, though she cannot fire nonstop due to a meter that, when depleted, removes the ability to cast for a moment until it recharges. This makes switching between the two very useful for certain scenarios, such as Alwen freezing an enemy for a few seconds so that Ragna can get in close and smack it freely. As the game progresses, Ragna gains a few add-ons that alter what he can do in a grapple, while each of Alwen’s magical abilities behaves a little differently, so that plenty of options are available for tackling a situation. Enemies are a long way from brilliant opponents, but can be nasty customers in many scenarios. 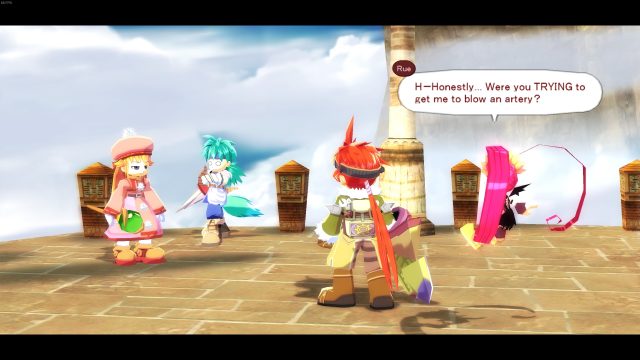 Why yes, that pair of characters on the left do look rather familiar from the prior Zwei, and it’s not an accident.

The Ilvard Insurrection does an excellent job of keeping its areas varied enough to stay appealing. Enemy variety is also high, with some palette swaps but also a number of bizarre opponents such as the deceptively dangerous hamster wheel or the awesomely aggravating deck of cards. Combat is still not among the more intricate systems ever created, but it’s significantly more involving than in The Arges Adventure. A slightly enlarged viewing angle compared to the first Zwei makes it easier to avoid attacks, while enemies are better about clearly telegraphing what they’re going to do. The presence of a jump button can make all the difference when it comes to taking down antagonists quickly, while Falcom was kind enough not to include any precision platforming sections alongside it.  This combat may not be the greatest system ever developed by Falcom, but it is pleasantly addictive.

Ingesting food is the means of gaining experience and healing in The Ilvard Insurrection. A useful mechanic is swapping ten identical culinary delights to get a single replacement that provides more experience than everything that was traded, though this isn’t nearly as useful for healing in a pinch. Taking advantage of this function is easy to do thanks to the spacious inventory available, so that the player can store a huge quantity of edibles to save transit time when exchanging — a pleasant change from The Arges Adventure. The Ilvard Insurrection does have an odd proclivity for widgets that take up valuable screen real estate with functions such as a pedometer and an analog clock, but these can be removed should the player wish. 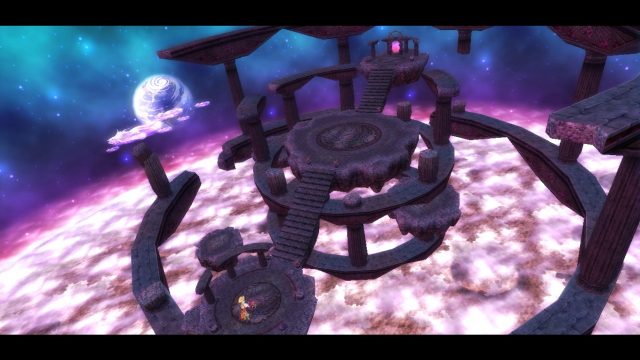 If the game didn’t take place on the planet of Granvallen, this image would be confirmation for moon conspiracy theorists.

The Ilvard Insurrection‘s structure of going to multiple dungeons with periodic boss encounters isn’t a reinvention of the wheel, but at least the player will find it easy to navigate. Each distinct piece of a dungeon has its own exploration rank, which is quite helpful as this also clearly lists what treasures haven’t been acquired yet. Certain puzzles found when exploring may cause some head-scratching, but none of the most taxing are mandatory for completion. Simply finishing this title isn’t a sizable challenge and can be done in about twenty hours, though investigating its quite engaging optional content can easily double that time.

This title didn’t push the boundaries of 3D graphics cards in 2008, but it has a lot of personality to make its lack of technical prowess easy to accommodate. The body language of character models helps define their personalities as much as dialogue some of the time, and The Ilvard Insurrection‘s animations make those movements easy to spot. Environments and opponent animations show off some impressive detail as well. There is a bizarre choice to have voiced sections accompanied by frantic mouth movements that in no way resemble the actual speech taking place, but this is a stylistic choice rather than a technical shortcoming. 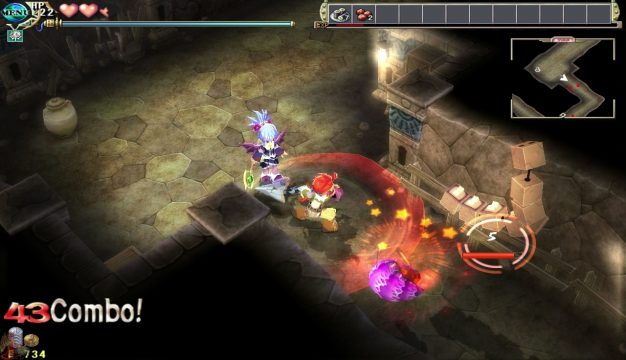 Teach those annoying creatures to defend their lair from intruders the right way – using untrammeled violence that makes a mockery of the effort.

Nihon Falcom is known for its ample musical prowess for soundtracks, and The Ilvard Insurrection does not disappoint. Quite a variety of tunes will be heard during the game, and none of them are bad. The variety is also impressive, showcasing a wide range of composition types and instrumentation. XSEED also deserves credit for putting in a very strong English dub. Certain characters, principally the villains, get to enjoyably overact, but all of the performers do a fine job.

I had some fun with The Arges Adventure but was also ready to be done when it ended. The Ilvard Insurrection is a considerable improvement over the first, one I had a blast playing. It promptly vaulted into the upper echelon of Falcom titles for me, and its underperformance in terms of sales is extremely unfortunate as it means the chance of another Zwei coming are slim. Maybe one day Falcom will start to further mine its back catalog for IPs that could be revisited though — and if another Zwei makes the cut, I’ll make sure to grab it.