Does Not Involve the Letter X

Though it’s crossed the radar of relatively more people on the other side of the Pacific in recent years, the size and longevity of the Ys series is still startling to contemplate. It began in the late 80s, and unlike a lot of its then-peers is still alive in the public eye. Having played most of the older installments in years past, I was curious to see how Falcom would tackle a title devoted to unfurling the franchise’s early game world. Ys Origin does so by pretty much sticking to what makes other titles in the series work, with fast action that doesn’t outlast its welcome, and I had a rocking good time.

Unfolding many generations before the usual Ys hero Adol was born, Origin details a quest to locate the suddenly-missing goddesses of the land. Their voluntary departure left a huge vacuum in the national hierarchy, and it turns out their destination is a massive tower that will later be known by the name of Darm. Ferreting out the whereabouts of the goddesses and combating adversaries who have a nefarious plan cooking in the tower is the job of the hero selected at the beginning, either knight apprentice Yunica Tovah or skilled mage Hugo Fact. A third character’s tale becomes available after completing the game once, though the same locations are visited no matter who is the protagonist.

Ys Origin sports a somewhat more complicated narrative than the early iterations of the series, but it is not the reason to play. The NPCs don’t receive enough development to become interesting, while the leads have a single personality crisis that will be overcome by the end of the game while constantly being referenced until then. As for the villains, they don’t get enough development to become nuanced either. This is not an insurmountable issue however, since the early Ys games were driven by action instead of narrative, and Origin follows in their footsteps superbly. 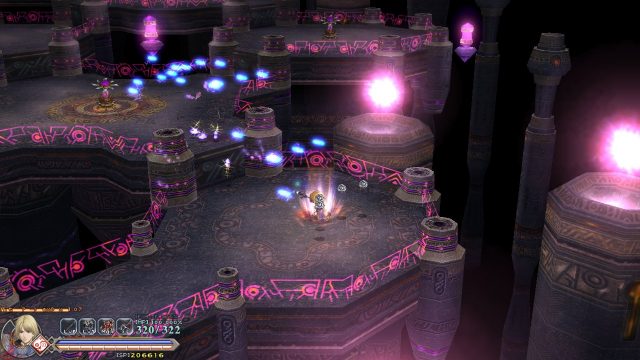 This area is brought to you by the color purple

While the original mechanic of ramming into enemies is gone, Origin sticks with the series tradition of keeping action fast and addictive. Yunica needs to get into melee range to do damage, while Hugo has magical projectiles that make his style of attack close to a shooter, but both move fast and precisely to mete out death to their adversaries. Special abilities are also unlocked as the game progresses, and they are vital for their ability to quickly defeat otherwise stubborn foes along with accessing a few locations regular moves cannot reach. As in Ys VI the protagonists can jump, which is necessary for platforming and dealing with certain enemies.

Falcom did a good job of keeping things fresh while trekking up the tower, with varying layouts and a large number of enemy types that act differently throughout. Environmental hazards such as water and sand also intrude, and while they can be irritating in their alteration of the basic controls, the intent of making the gameplay vary is achieved. Each character’s journey can be completed in under ten hours, which also helps to ensure that unnecessary repetition is avoided.

Enemies cough up their experience automatically, but the other things they can drop get scattered around the landscape and must be manually gathered. Some of the landscape patterns in Origin make it tough to see these baubles, and they often fall to lower levels to further make their capture time-consuming. The currency obtained by catching these goodies leads to various enhancements that can be granted from save points, so grabbing all of them is recommended even though it’s a pain. 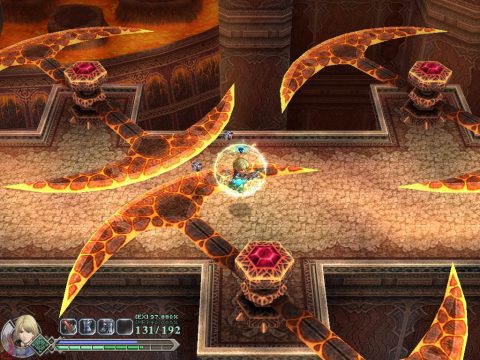 They’re less manacing than TIE fighters, but not a whole lot

Ys titles have usually featured tough bosses with many attacks to avoid, but by gaining a level or two the odds often sway in the player’s favor. That holds true for this title, though the difficulty select at the beginning allows a great range of potential challenge. At the lowest setting, powering through the game while barely paying attention to enemy patterns is possible, but that is not true of higher difficulties. The presence of three characters and plenty of other features also does a good job of enticing some replay, which keeps the short length from being a hindrance.

Having been developed in 2006, Ys Origin is unlikely to make any PC of recent vintage experience graphical difficulties. Its visuals speed along at a fast clip and display all pertinent information without problems, though temporary bonuses granted from enemy drops are in a tiny type size on the screen. While its individual areas accomplish nothing in their visual depiction to set the video game world on its ear, they get the job done effectively. The audio component exhibits Falcom’s usual composition strength, with a variety of tunes both new and harkening back to earlier Ys games that complement the action in an excellent way. Enemy death screams are also well done, and serve the important function of making clear which opponents have just expired in a hectic melee of trying to pick the correct target.

Many thanks to XSEED for making this game playable in English, for otherwise it would have been like many other Japan-exclusive Falcom titles. It had been several years since I last played an Ys title, but the pleasant sensation of running around well-designed areas with bosses that demand attention immediately came back to me. I’m not sure where to rank this one in the series, but it’s entertaining enough to stay a long way from the bottom. 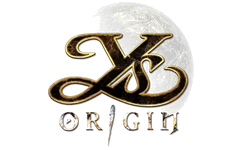