For over thirty years, Ys has been a staple of the action RPG genre. Over the decades, Nihon Falcom has carved out a unique niche for Ys with fast-paced action combined with upbeat, rock-infused soundtracks. While the series has slowly progressed over the generations, the move away from the restrictions of Sony’s handheld consoles has allowed Falcom to expand this latest title in new and interesting ways. Ys IX: Monstrum Nox is the biggest change to the series since the inclusion of a party system, with a multitude of new abilities that transforms the way Adol and his compatriots interact with and traverse the world. This update to exploration combined with a well-crafted story makes Monstrum Nox the best of the modern Ys games and a treat for any fan of action RPGs.

Ys IX opens with a prison break from within the fortress city of Balduq with Adol fighting his way through a labyrinthine tangle of tunnels and chambers that extends beneath the prison. On the cusp of escape, Adol is confronted by a strange woman with glowing prosthetic appendages. Adol barely gets out a word before the woman shoots him with a green bullet that ‘curses’ him. This mysterious figure, Aprilis, thereby condemns Adol to become a Monstrum — a group of people who have been granted supernatural abilities, but in exchange are tied to the city of Balduq, forced to fight enemies that appear during the Grimwald Nox.

These Grimwald Nox play out as raid battles where Adol and the other Monstrums must defeat waves of enemies punctuated with a final boss battle. This mirrors the village raids that were a part of the console versions of Ys VIII, though the frequency has been dialed back and players control when the battles occur. Each time one of these raids is completed, a new area of Balduq is unlocked to explore. Thus Ys IX quickly falls into a comfortable pattern of doing enough side quests to unlock the next Grimwald Nox, followed by a new area of Balduq to explore, which leads to a quest to investigate the mysteries of the prison. 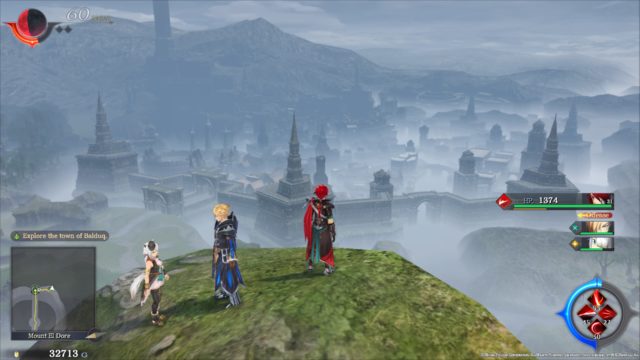 Balduq is a beautiful place to explore.

The story also unfurls in what becomes a pleasingly predictable pattern. Each chapter involves encountering one of the Monstrums, learning their backstory, and eventually incorporating them into Adol’s party. The Monstrums are a trope-fueled bunch, but they make for a good gang to explore the city with. While the character interactions are pleasant without being particularly memorable, the main narrative surrounding Adol is one of the strongest in the series history. There are a number of surprising moments and the overall mystery surrounding Balduq prison, Aprilis, and the Monstrums ties together with those early surprises in some incredibly satisfying ways. The story also incorporates plenty of nods that longtime series fans will pick up on without alienating newcomers with reams of meaningless verbiage.

Adol spends most of Ys IX traversing an urban environment, rather than exploring a vast forest or uninhabited island, which is a new turn for the series. As the other Monstrums slowly join Adol’s party, they provide access to new abilities that further open up Balduq. These powers — such as teleporting, running up walls, gliding, diving underground, and special vision that allows secrets to be seen — are blended into both the exploration as well as the combat. While all of these abilities have been used in games before, their incorporation into Ys IX has been done in a seamless way such that the upbeat nature of the game is maintained. These abilities make revisiting earlier areas interesting as chests and other collectibles that were previously out of reach can now be acquired. The mechanics themselves are great and make the moment-to-moment gameplay more engaging than some previous entries in the series; it’s simply a lot of fun to run up walls, zap between teleportation sites, and glide from the heights of the city to land in new areas. When combined with the architecture of Balduq, it creates small environmental puzzles that are satisfying to solve.

Ys IX straddles the line between open-world and linear gameplay in a way that works well. While previous entries used narrow corridors connecting chambers for boss battles, Ys IX has large, densely packed areas to explore. While Balduq doesn’t match the scope of some of the giant metropolises that dominate modern open-world RPGs — and certainly the NPCs aren’t as alive as in many open-world games — it nonetheless is still a large place to explore and has its own unique medieval charm. With area cordoned off until the requisite Grimwald Nox is completed, Ys IX provides plenty of exploration while also giving structure to as where to go next and thereby ensures that new areas are doled out evenly througout the game. 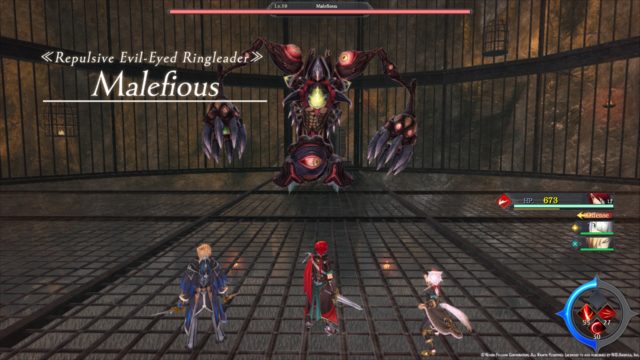 The boss battles are the highlight of the fantastic combat in Ys IX.

Ys is known for its frenetic combat and that continues in Monstrum Nox. Ys IX retains the party system that allows players to swap between three characters with a simple press of a button and characters’ weapons have attack attributes which fall into three categories: Slash (which works against soft enemies), Strike (which works well against armored enemies), and Pierce (which is strong against flying enemies). This encourages swapping between characters to take advantage of enemy weakness, though later in the game players will gain access to items that change these attributes and allow players to always use their favorite characters.

Enemies and chests are constantly providing a barrage of different materials that Adol’s compatriots can transform into upgraded rare items and equipment. There’s even a system for talking collections of old materials and transforming them into more useful late game ingredients. The crafting system gives a fun outlet for all of the time spent exploring Balduq.

Combat centers around stringing together series of attacks and making ample use of dodges and parrying moves. Enemies all have patterns of movements to learn — which become important to master on higher difficulties — but players will quickly get into the rhythm of rolling in, slashing a few times at an enemy, and quickly dodging or parrying the incoming enemy attacks. Perfect timing with dodges or guards is rewarded by time being slowed down, brief invulnerability, and automatic critical attacks. The system is supplemented with a series of equipable special skills that are powerful area attacks that operate in conjunction with a skill meter which increases with attacks that are landed on enemies. Despite the simple underpinnings, it’s an incredibly engaging system that is approachable for newer players while still providing depth for returning veterans.

While the combat itself is constant fun, the boss battles are where the system really shines. Ys has always had an interesting variety of animal-inspired bosses that never fail to be visually arresting and memorable challenges. However, the incorporation of Monstrum powers elevates these encounters to another level. Whether it’s using Adol’s teleportation power to catch up to a boss that can transform into a swarm of bats or using Doll’s Third Eye to find bosses’ weaknesses, the implementation of these powers makes these encounters both tense and engaging. One battle in particular against a giant centipede, fighting up a spiral staircase and ultimately using Renegade’s ability to dive underneath the beast is such fun that it will leave players giggling with delight. 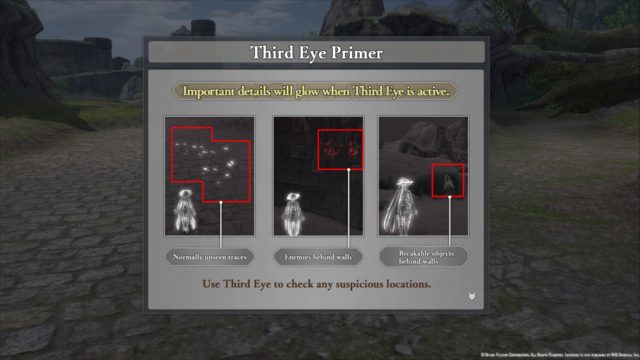 Special powers transform the way Monstrums interact with the world.

Not only are the bosses a treat to play, but they are punctuated with plenty of rocking tracks to get players’ blood pumping. Whether it’s upbeat tracks like “Monstrum Spectrum” that infuse the game with energy or the softer, more subtle tracks like “Ambiguous Territory” that convey the mystery at the heart of Balduq, the soundtrack is killer as is to be expected from Falcom. The voice cast — both English and Japanese — turn in solid performances, though it does seem that a bit more of the script should be voiced than actually is.

Budgetary constraints that perhaps account for the occasional lack of voice acting also rears its head in the uneven nature of the graphics. The overall visual aesthetic is pleasing; Balduq has a unique Gothic style and Ys IX maintains the appealing anime-inspired character designs that have pervaded the series. However, the open-world aspects of the game leave fewer places to hide the rough edges and makes the lack of polish apparent.

The performance isn’t perfect either, as there are intermittent instances of pop-in. However, the frame rate remains solid, even with swarms of enemies to conquer. It should be noted that while there were some stability issues on PlayStation 5 before launch, the initial patch cured those issues and despite the graphical limitations, Ys IX otherwise plays flawlessly.

Ys has always had some of the most entertaining combat married with some of the best soundtracks in the RPG genre. However, Monstrum Nox manages to improve upon that already solid base with the titular Monstrum powers that elevate the exploration and boss battles thereby making both the moment-to-moment gameplay as well as the crowning encounters all the more entertaining. It comes together into an RPG experience that is not to be missed. 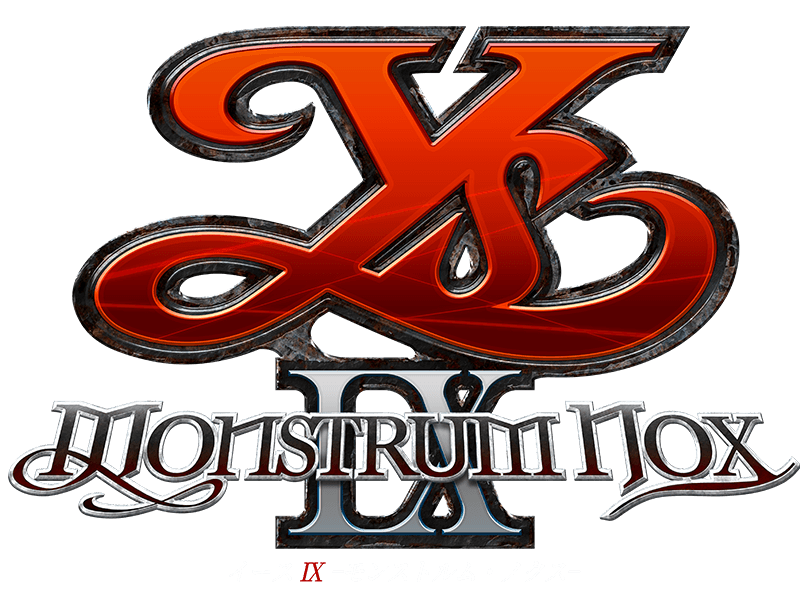