Kazuma Kiryu vs. The Universe

Of all the games to release in 2015, Yakuza 5 was my most anticipated release. From Sega’s announcement last Christmas, I’ve had to wait almost a full year to get my bicycle carnage fix. The Yakuza series is completely rich in lore, and this is the first time in which players will leave the game’s staple city of Kamurocho, in order to weave a much larger tale. Spanning five cities and five protagonists, Yakuza 5 is easily the most ambitious game in the franchise.

Picking up after the events of Yakuza 4, the Tojo Clan has gone under a large-scale reorganization, with Daigo Dojima, the Sixth Chairman, attempting to create an alliance with their rivals the Omi Alliance. On a business trip in Fukuoka, Daigo disappears on the eve of the alliance pact. The former Fourth Chairman of the Tojo Clan, Kazuma Kiryu has moved to Fukuoka under the identity of Suzuki Taichi, a taxi driver. With the disappearance of the Chairman, Kazuma is forced back into the yakuza underbelly to uncover what is truly going on within the Tojo Clan. Meanwhile, four other cities are hanging in the balance if a truce cannot be made between the Tojo Clan and the Omi Alliance.

Yakuza 5 spans five unique locations, each tied to an individual who is related to the central plotline. In Sapporo, Saejima Taiga is back in prison to atone for personal crimes, but makes a jail break when he realizes there is a yakuza clan running the slammer. Haruka, Kazuma’s adopted daughter, leaves Okinawa to become a pop idol in Osaka, meeting Shun Akiyama, who is also in town opening the new branch of his finance business. Lastly, in Nagoya, is Tatsuo Shinada, a baseball player deep in debt to local loan sharks, and who had his career ruined thanks to a perfect home run. 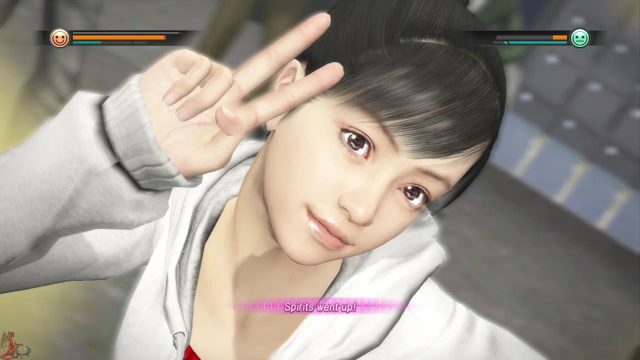 While the narrative seems like quite the mouthful, it’s surprisingly well developed and intricate in design. These four other characters, along with Kazuma, have plotlines that build off of each other, making the the larger mystery come to life. There are so many twists and turns to keep the player guessing between what is fact and what is fiction, making for an engaging story from start to finish. Each chapter offers the player more pieces to the bigger puzzle, but equally provides new questions as well. Yakuza 5‘s story is easily one of the best in the series as it does a phenomenal job drawing the player into the lives of the five protagonists and the seedy underbelly that each is combating. If there was any downside to the plot, it would come from the game’s localization, which feels a tad rushed in areas, and most noticeably with spelling inconsistencies throughout Haruka’s chapter, and the odd typos that leak into an otherwise great story.

The writing is so strong in fact that it even carries over to the side stories and substories. Each protagonist has their own special side story that is optional to complete, but each of them are so compelling that it’s easy to get sucked into it. From Haruka’s rise to pop stardom, to Kazuma’s new persona, its easy to get swept into these side stories and wanting to see what the outcome will be. Moveover, the substories in Yakuza 5 are definitely a highlight, as they go beyond the previous game’s fetch quests and dude punching to include dance battles, chicken betting, and other shenanigans.

Speaking of dude punching, there’s a lot of it in Yakuza 5 and it’s a much more streamlined experience than prior games. Gone is the separation of “Adventure Mode” and “Combat Mode” where entering battle required a screen change would happen for battles. Now these modes are much more seamless instead of being introduced as a “random encounter”, and it’s easier to pinpoint when an enemy is about to attack. Yakuza 5 continues the series’ trend of using a brawler style combat system where objects can be taken from the environment and used as weapons. Each protagonist, excluding Haruka, has their own unique combat and play style, along with their own special techniques and finishing moves. When a character is in Heat Mode, which engages when a character has hit enough foes, their attacks hit harder and faster, with a variety of special moves open to the character based on the environment. For example, if a protagonist is near a wall and triggers Heat Mode, they can grab an enemy and smash them into the wall. Of all the games in the series, Yakuza 5 easily has the most refined combat system, as the flow of combat is the smoothest it’s ever been. 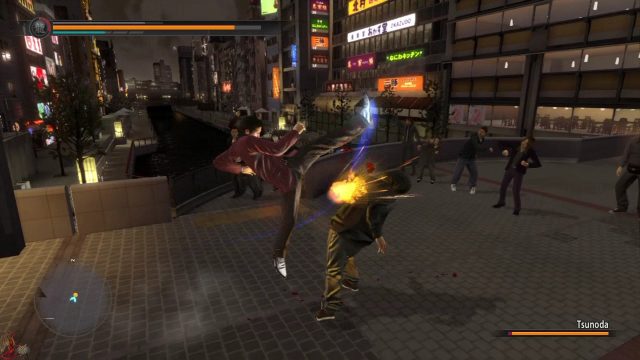 Providing an Osakan beat down.

Furthermore, Yakuza 5 also introduces Dance Battles, which are Haruka’s method of combat. While playing Haruka’s section, she can challenge local dancers to battle using a rhythm style battle system, where the player must push the face buttons in time with the music, while also using the D-pad to switch to different sections where the buttons will appear. In the middle of the battle there is a bomb that moves from side to side based on how well the player pushes the buttons. Each opponent has a difficulty level, as well as a rank, though if players find these battles too challenging, they can switch the challenge level to easy with the only penalty being fewer experience points. This battle system as an addition is wonderfully intuitive, easy to learn and makes for a nice change in the gameplay structure. Haruka can also take on other jobs related to her idol stardom, some requiring minigames to complete, and others using the rhythm battle system to complete. Even the minigames in Yakuza 5 are less challenging to play, and there are not as many mandatory minigames in this installment compared to previous games, making them easier to ignore if the player isn’t interested in pursuing them further.

Yakuza 5 is easily the largest game in the series, spanning five cities, each with their own distinct personality. For example, Sapporo’s Tsukimomo has a cold extorior filled with warm people willing to lend a hand, while Nagoya’s Kineicho offers friendly faces habouring a dark secret that clouds over the neighbourhood. Exploration is much more enjoyable as there’s more places to roam around and more content to enjoy. Each area is well defined, mirroring the neighbourhoods they are based on, bursting with life and energy. If there is a downside to this, there’s a surprising number of invisible walls in the game, and areas are much more diverse, but it’s easier to get turn around if the player isn’t participating in a story mission. Visually, the game looks good, though there’s still the usual pop in from random NPCs and screen tearing through enemies during battles. The cutscenes are still gorgeous, with characters beautifully animated, bursting with stunning detail.

In terms of sound the majority of Yakuza 5 sports more city life than any actual music. The voice acting is fantastic, and there’s certainly some standout performances, particularly Romi Pak who plays Haruka’s mentor, Ms. Meiri Park. The only music that exists in the game is either from store jingles, or during Haruka’s section, where there are a small handful of tunes for her to sing and dance to. It makes for a lack of variety, especially during dance battles when the player will hear the same small handful of tracks repeated. There’s also the issue of recycled tracks from previous games, and while those tracks are still great, more variety still would have been greatly appreciated.

Considering Yakuza 5 was my most anticipated game of 2015, it offered me everything I wanted in a game: a great story, tons of action, and wide areas worth getting lost in. While I wouldn’t recommend that newcomers start with this instalment, even with the reminisce option, there’s enough for both novice and veterans of the series to enjoy. Sega offered me the best Christmas present, and it was completely worth the wait. 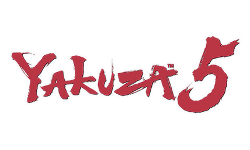