Sega has announced that it is bringing the PlayStation 4 versions of Yakuza 3, Yakuza 4, and Yakuza 5 to North America and Europe as The Yakuza Remastered Collection. The games are receiving staggered digital launches, with Yakuza 3 available now. Yakuza 4 will follow on October 29, 2019, with Yakuza 5 set to launch on February 11, 2020. A limited run physical The Yakuza Remastered Collection: Day One Edition will be released on February 11, 2020, that includes: 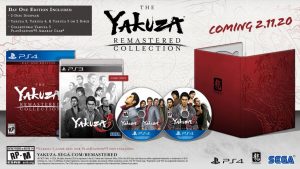 Yakuza 3, 4, and 5 were all originally released exclusively for PlayStation 3. The remasters will make the entirety of the mainline Yakuza series available on PlayStation 4, with the first two games remade as Yakuza Kiwami and Yakuza Kiwami 2. In addition to graphical enhancements, the remasters of the three games will undergo a relocalisation process and include all of the context that was cut in their previous English releases, such as Yakuza 3’s mahjong, shogi, massage parlour, and cabaret minigames.