When We Were Orphans

Let me preface this review by stating that I have never played a Yakuza game, nor did I ever dream that I’d ever be playing one. As someone who loves yakuza films and crime novels, however, how could I potentially avoid a game series that embodies things I adore? Well, I feel as though I owe the Yakuza series an apology for judging a game by its cover. I also feel like it deserves the utmost thanks for taking me out of my comfort zone, and blessing me with one of the most unique gaming experiences of all time. Yakuza 3 is not a perfect game, but believe me when I say its strengths are many, and place it in a unique class of its own.

Players take on the role of Kazuma Kiryu, a former yakuza attempting to atone for his sins by relocating to Okinawa. There, he assumes the roles of owner and head caretaker at the the Sunshine Orphanage, where he attempts to instill positive messages of life, love and learning into these abandoned children. However, his past life catches up with him when Sunshine Orphanage becomes entangled in a brutal land-ownership battle. The land Sunshine sits atop of is owned by a local yakuza boss named Shigeru Nakahara, who is under government pressure to sell the land so that a resort can be built. Around the same time, Daigo Dojima, head of the Tojo family and one of Kazuma’s closest friends, is shot during an attempted assassination. This forces Kazuma to once again be thrown back into the lifestyle he’s been atoning for.

Yakuza 3‘s story is easily the game’s greatest strength, and coupled with Sega’s great localization, it’s not hard to become fully invested in the characters and plot. The game’s emotional spectrum is wide-ranging; one minute it can be lighthearted and whimsical, the next minute completely serious and focused, and it makes this transition effortlessly. The characters in this game are also beautifully crafted and have so much personality that becoming attached to them is very easy. Yakuza 3 is quite plot-heavy, but it has a well crafted story to share, making it easy to become invested in the game’s world. Plus if you haven’t played Yakuza 1 or 2, the game provides newcomers with twenty minutes of extra footage from the previous games that can be viewed optionally. Kazuma’s character growth is constant and strong, and the man shows enough emotion to keep players interested in his life-changing journey. Much like a true Mafia story, Yakuza 3 showcases the rise and fall of the many families, and the exercising of their power in order to successfully push the resort deal through, abolishing Kazuma’s Sunshine Orphanage idyll.

Another element that player’s will find themselves invested in is the combat. Yakuza 3‘s combat is a mixed blend of brawlers such as River City Ransom and traditional RPG elements. Since the game’s world is very open, enemy encounters are random, with Kazuma running around the streets of Ryukyu City or Kamurocho and staying constantly on guard as random street punks, gang members, and other yakuza attempt to end his life. The combat is well-controlled as players can punt, throw and grapple through floods of enemies at any given moment. As Kazuma completes missions and defeats enemies he is awarded experience points which can then be used to upgrade his combat skills. There are four areas in total that can be upgraded: Body, Essence, Soul, and Technique. Each provides Kazuma with new abilities or techniques as these skills level up. This allows for a great amount of customization, and permits for players to tailor Kazuma to fit any play style. Some battles are one-on-one, while others are group melées. Sometimes, Kazuma will also be blessed with a party member who can help out during some of the brawls. Kazuma can also equip weapons that he buys or finds throughout, and each weapon that he uses has a unique special ability. 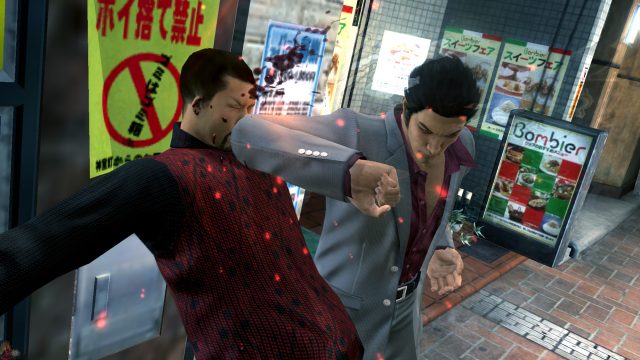 When Kazuma has dealt enough damage, he can enter Heat Mode, which has two levels. Kazuma flashes blue in the first level, where his attacks deal double damage and pressing triangle executes a special move even without a weapon. Heat Mode’s second level occurs when Kazuma flashes red, tripling damage dealt. There are also gruesome finishers that sadly can only be used on bosses, but they can deal tremendous amounts of damage to a boss if the right amount of heat is emitted. Heat Mode is governed by how hot Kazuma is at any given time, and some enemies can take Heat away, so watching its level is of constant importance.

The only downfall in Yakuza 3‘s combat is its somewhat repetitive nature, though that is ameliorated by the depth and multitude of moves to learn. The repetition becomes acute while cruising through Ryukyu or Kamurocho doing side missions, or if one is lost. The encounter rate is fairly high, but with some clever dodging skills, it’s easy to avoid most of the enemies if you catch them before they catch you.

While it is unfortunate that Sega cut out some of the minigames and side quests, Yakuza 3 still possesses copious quantities of content. Yakuza 3 has so much content to explore that sometimes it can get a little overwhelming. With over one hundred side quests and twenty hitman missions to complete, it’s very easy to become sidetracked from the main plot, allowing Kazuma to have some downtime. One of the best aspects outside of the combat and story comes from the “Revelations Mode,” in which Kazuma can take pictures with his cell phone to record new techniques or moves that he discovers while wandering through different parts of Ryukyu and Kamurocho. A gaijin looking for inspiration named Mack sends emails that direct Kazuma to the locations of these opportunities. If the player is successful at snapping the camera at the required moment, the reward is a new finisher, grappling technique or other combat skill, which is then recorded onto the Dojima Dragon’s personal blog. Yes, Kazuma has a blog, and it’s absolutely hilarious.

While Yakuza 3 gives players a lot of freedom, encountering invisible walls is commonplace. Although it doesn’t detract from the gameplay, it’s annoying to wander about town and accidentally get to the edge of it when more could have been created. Having said that, Ryukyu and Kamurocho are grand in size, making exploration a pleasure, and for the directionally-challenged, there’s a very easy-to-use map that’s colour coded to make sure that players can’t get lost. The game also sports plenty of minigames, and while shogi and mahjong are missing, there are still other games to explore such as darts, bowling, UFO catchers, pool, and golf. The only problem with many of these minigames is that they are uninteresting to play, or have poorly explained mechanics. While the games are there to provide a distraction, they don’t function as good distractions. 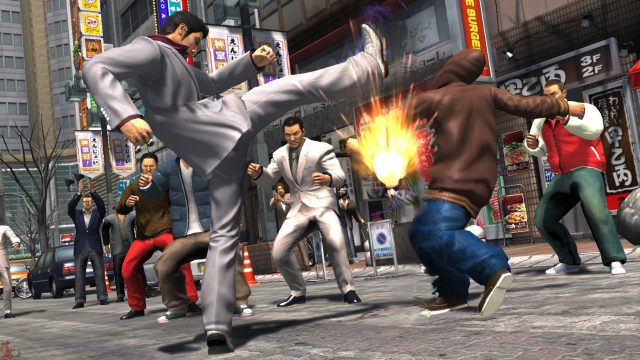 Boot to the head.

Speaking of good distractions, however, the graphics in Yakuza 3 are spectacular. Each cutscene is intricately woven, and the amount of realism that has gone into each character model is impressive. There is so much attention to detail on each scene and character model that it adds to the story’s effect. There is also an astounding amount of detail that has been poured into the main cities’ designs. When roaming around Ryukyu and Kamurocho, the player will feel completely enveloped into the hustle and bustle of busy city life. Even outside the cities, environments such as Sunshine beach look breathtaking, and it’s obvious that a huge amount of work went into getting these locations to look spot-on. Unfortunately, one minor gripe about the graphics is the obvious difference in quality between cutscenes and in-game visuals. While they still look well-crafted from a distance, up close the character models look flawed and somewhat grainy, which is a shame considering the detailed look of the cutscenes and locations.

Since plot is a vital aspect of Yakuza 3, voice acting plays a major role in the overall experience. That being said, Sega opted only for a Japanese language track with English subtitles, and for a game like Yakuza 3 this seems completely reasonable considering the game’s modern Japanese setting and cultural aspects. The voice acting is strong, and makes players feel immersed in the underground world of the yakuza. One thing which stands out, of course, is the realistic and effective sound effects that are heard in the game. Cars, people, birds, waves, and numerous other sounds add a lot of depth to Kamurocho and Ryukyu cities’ designs, making the player feel as though these are real places. Yakuza 3 features a wide variety of music, ranging from jazz to techno, some of it being licensed property which can be heard when entering karaoke bars. While the music and sound isn’t one of the major high points, it’s still done exceptionally well.

Yakuza 3 can be completed in roughly twenty hours, though there’s enough content to push it closer to thirty if players do every request and mission. There’s a lot of replay value here, since completing the game nets players a rank that can be improved if certain requirements are met. While the game is still very linear, there’s enough of a sandbox to roll around in. It is also important to note that the difficulty is adjustable, and getting a Game Over twice while playing on Normal allows players to retry the offending encounter at a lower difficulty.

It’s a tiny bit disappointing in some ways that Sega did not treat Yakuza 3 with the utmost care, because if it had, this title would have been a guaranteed home run. It’s been a long time since I found myself so deeply invested in a Mafia story, but Yakuza 3‘s plot is so perfectly woven that it stays engrossing from start to finish. If you own a PlayStation 3 and you’ve been on the fence about giving the Yakuza series a whirl, don’t be afraid. Yakuza 3 has tons to offer for RPGamers of all kinds, and if nothing else, you can at least kick loads of gangster ass while taking names.