Why the twin narrative pillars of Shakespeare and the magical girl genre have never previously found common ground in works of fiction is a question that scholars have shamefully only dared to whisper about on lonely winter nights deep in the bowels of dusty university libraries. It was left to Robert Boyd and Bill Stiernberg of Zeboyd Games to finally bring the two together, with a healthy dose of Eldritchian horror thrown in. Packed into a pleasingly tight seven-hour experience, This Way Madness Lies is an excellent blend of disparate genres, solid gameplay, and humorous writing.

This Way Madness Lies follows a group of third-year high school girls in the Stratford-Upon-Avon High Drama Society. The game doesn’t waste any time setting up the premise: not only are these girls accomplished thespians, they can also travel via dimensional portals to other worlds based upon various Shakespearean plays. These worlds are under attack from nightmarish monsters, and these young actors change into their magical girl forms to battle the beasts and rescue some of the most iconic characters in literature. Between their extra-dimensional duties, the girls attend an English Literature class taught by a stream of substitute teachers as the regular teacher suffers from an unending string of strange and unfortunate events.

Despite the less-than-stellar education they receive, the students successfully put on many stage productions and hang out around town having sleepovers, adopting pets, and defeating the occasional monster that slips through into their real world. The pacing between story beats and adventures in the various Shakespearean worlds works beautifully, with the changes in scenery never too far apart. Players get to know the characters quite well during their school and home interactions. The addition of optional party talk in the worlds in which they battle is a nice added touch while players are experiencing the magical girls’ might during their dimensional adventures. 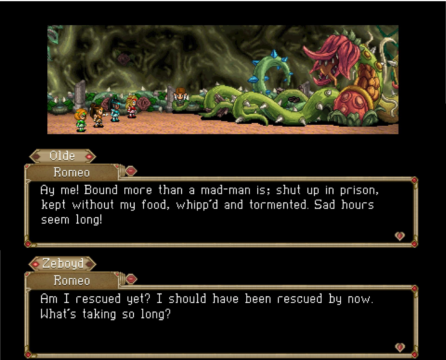 The writing has been a consistently great feature of Zeboyd’s previous titles, and This Way Madness Lies also shines in this respect. Almost every bit of text in the game has been crafted for humor: the reactions of characters to the situations they find themselves in, the situations themselves, the endless stream of substitute teachers the girls have for their English Literature class, enemy monster descriptions, etc. Adding to that with copious amounts of fourth-wall breaking moments, complete with references to their own previous games and annoying aspects of This Way Madness Lies itself, and there are few times players won’t be grinning, chuckling, or humorously groaning through what they’re reading.

While this can be found in other Zeboyd titles as well, This Way Madness Lies takes it a step further by having its Shakespearean characters speak in “Olde English” or a translation to New English, otherwise referred to as the Zeboyd version. Any time someone speaks Olde English, a sideways tap of the directional key will change the dialogue to its more modern-day version. Sometimes it’s just clear and precise wording of the otherwise flowery prose, but it’s done often enough in a humorous fashion to be worth flicking between both versions. The mastery of both the Shakespearean sources and what makes for humor in modern day makes for thoroughly entertaining writing throughout.

Zeboyd takes just as much care with the artistic design of This Way Madness Lies. The pixel art is quite detailed, and the way in which common bats, snowmen, and house plants are turned into Eldritchian horrors exudes a level of skill that makes players take note. Each of the main protagonists’ color scheme and style translates well into to their magical girl transformation. The unskippable [note: the release-day update made these skippable] transformations before each mission are well animated, and while they become mildly annoying in how long they take, they’re a playful callback to those cartoons players watched in their youth, witnessing the same transformation and rousing song every week. On that note, Joshua Queen’s soundtrack is fabulous. This Way Madness Lies‘s titular vocal theme, which plays on the main menu, is great, while the atmospheric background music and boss themes all hit the right notes and perfectly complement the action on screen. There is no voice acting for individual lines, but the protagonists’ exclamations during battle are well-performed and fit right in with the magical girl aesthetic. 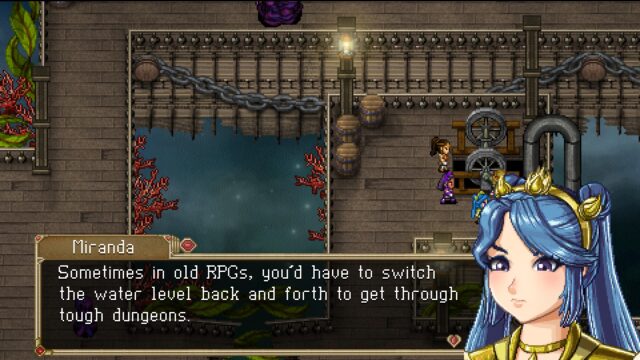 Blessedly, this wasn’t a feature in the Twelfth Night world. Flip the bilge pumps and move on!

The game features plenty of streamlining; it contains no weapons or armor for players to purchase or equip, while the entire Stratford-Upon-Avon High Drama Society levels up as a group, not as individuals. However, for a seemingly simple turn-based battle system, a lot of planning has gone into giving it depth where appropriate. Each character can have up to three traits equipped that offer increased stat bonuses as well as passive buffs, with characters unlocking new or boosted traits and abilities as the group levels up. Each character can equip up to seven abilities as their available attacks and magic skills, and swap them around any time outside of battle. Individual abilities can each be used once before characters need to spend a turn recharging, which restores all of that character’s abilities.

Unity Abilities are also available depending on which magical girls are taking part in battle. These pre-set abilities get more powerful each round, but they can each be used only once per encounter, so deciding exactly when to unleash them is an interesting strategic decision each time. At the end of each battle, all characters are restored to full strength, and any battle that ends in defeat can be instantly challenged again. This allows players to go all out each battle and really explore multiple strong strategies without fear of failure or wasting precious resources.

Enemies are visible while traversing through various Shakespearian world dungeons, and while the vast majority of them can be avoided with some fancy footwork, there are a good amount of immobile enemies that block certain passages. Defeating an enemy removes them from the map for good, but for those players wishing to grind to their heart’s content, there’s a convenient Battle command from the main menu that will begin an encounter at any point in dungeons. There are four difficulty levels available to players, and these can be changed at any point throughout the game, making for a easily customizable adventure for novices and experienced gamers alike. Skills and abilities continue to unlock and grow more powerful all the way up to level 100, although those on the default difficulty should be able to complete the game with characters around level 50. 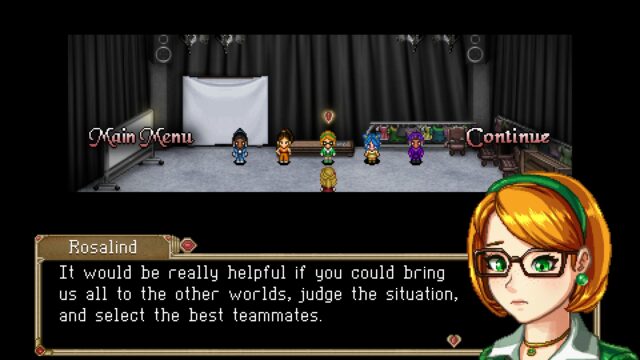 Rosalind brings up a good point, and one of the quibbles about this game, although that option does appear 70% of the way through the game.

There were very few faults to find in the breezy experience that This Way Madness Lies provides, with Zeboyd’s self-referential humor pointing them out itself. Though only needed a few times, a Run Away command would have been useful, and Imogen questions the lack of one during an intermission discussion. The lack of an ability to pick their preferred team is a good way to get players to experience playing as every character, but leads to an uneven early-game experience in one dungeon where no characters seem equipped to hit multiple enemies at once, and with one character being especially limited. After a certain plot point, the ability to choose is unlocked, but it’s nearly the end of the game by then. The option is welcome when it is made available, but diluted by only being there for a couple of hours.

Those minor quibbles apart, Zeboyd Games has provided a splendid experience from beginning to end. With a bevy of 50-100+ hour RPGs weighing down RPGamers’ backlogs and more always on the horizon, its smaller experience makes for a welcome, hilarious, and reinvigorating respite. With such great writing, beautiful art direction, and a battle system with just the right amount of depth for its length, This Way Madness Lies’ lovely bite-sized package is still as fulfilling an RPG experience as they come.