In a market oversaturated by one Souls-like after another, The Last Oricru sincerely makes an effort to distinguish itself from the rest of the pack. Its marketing bills it as an action RPG that places a heavy emphasis on storytelling, and this is far from an empty promise. Unfortunately, over the course of its fifteen-to-twenty-hour runtime, the game also makes a great case for the idiom “don’t bite off more than you can chew”, as its ambitions often outpace the resources that a small first-time developer like GoldKnights has available. The result is a game that, despite the notable effort put forth into its writing and storytelling, is constantly dragged down by technical issues and an unrefined combat system.

If nothing else, The Last Oricru brings some original ideas to the table in terms of setting. The game presents an interesting mix of science fiction and fantasy elements, making heavy use of both in equal measure and mixing them in intriguing ways. The story is set on the world of Wardenia, ruled by the humanoid Naboru, who have pressed the rodent-like bipedal Furkin into servitude. Mere minutes after the game kicks off, the player is caught in the opening salvo of a brutal revolution and must choose a side as the Furkin rise up against their masters and fight for their independence. The player character, named Silver, is a human — an alien here on Wardenia — sent via spaceship on a secret mission and stuck in cryosleep after things go awry until being awoken by an unknown entity in the game’s intro cinematic.

Wardenia is a technologically inferior planet, akin to medieval times, meaning its conflicts are fought with sword and shield and are spread over castles and fortresses. That’s pretty standard stuff for this type of action RPG and does represent the majority of what the game has to offer, but some levels provide an intriguing clash. Notable examples give Silver the chance to explore the high-tech human spaceship or let him ditch his chainmail for protective space-age armor. Aside from Silver, there are a handful of other extraterrestrial characters in the game, human and otherwise, not to mention a mysterious third faction interfering in the revolution from the shadows. The vibe is a sort of cross between the sci-fi of Mass Effect and the medieval fantasy of The Elder Scrolls, though it unfortunately becomes apparent all too soon that these similarities to titans of the genre are only skin-deep. 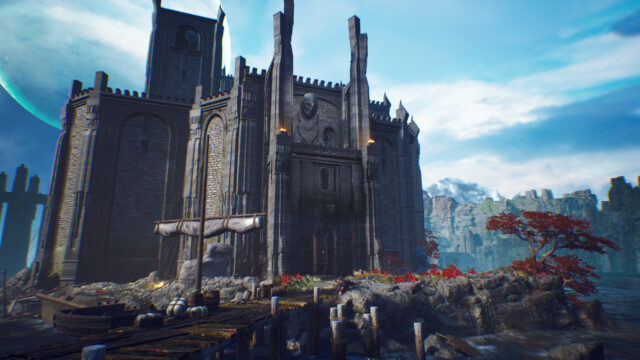 Portraying an alien from outer space is a neat take on the well-worn concept of exploring a medieval fantasy world.

For a game where action is vital to its success, it’s important that combat is finely executed, and The Last Oricru just never clears this bar. On paper, all the basics are present and accounted for: normal and strong melee attacks, flexibility in character builds, a twist on a magic system in which “spells” are secondary abilities provided by the gear placed into Silver’s equipment slots. In practice, however, combat is sluggish and quite rough around the edges. Enemy attacks are hard to predict and effectively counter. Doing damage boils down to moving within approximate striking distance, wildly mashing the attack button, and hoping feverishly that the unintuitive hit boxes collide. Enemies don’t appear to stagger from received damage either, so the dance of combat often revolves around learning through trial and error how many hits can be snuck in before the enemy winds up for a retaliatory strike. It’s an unrefined experience that frequently crosses into frustrating territory and carries the lion’s share of the blame for why the ending credits feel like such a welcome relief.

To make matters worse, enemies seem to posses a sixth sense of sorts. The fact that Silver is able to switch to a sneaking posture might make it seem like stealth can be factored into the combat equation, but enemies will always become aware of his presence as soon as he’s within a certain radius, line of sight or concealing cover be damned. Facing down groups of multiple enemies becomes a challenge of trying to kite a single enemy away from the group, as fighting multiple foes is an unbalanced crapshoot. Furthermore, the path the player takes through the game seems to have a not inconsiderable effect on the level of challenge they will face; the initial choice of which race to support in the breaking revolution, for example, causes an early-game area to be populated by different types of enemies with wildly varying degrees of challenge. 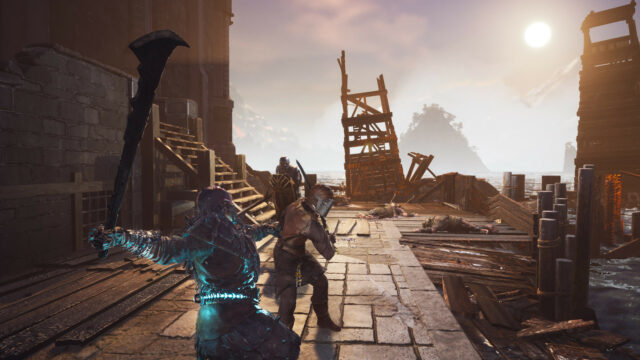 Just attack and hope for attack range, hit boxes, and enemy recoil immunity to line up and smile upon you. Simple.

Even outside of battle, Silver doesn’t do himself any favors, with a personality that is about as irritating as can be. With his ability to avoid permanent death, smartly explained in-game as being due to his space-age alien technology, Silver becomes one of the most valuable fighters for whichever side he joins, and this routinely puts him into close contact with Wardenia’s highest-ranking leaders. Whether enjoying an audience with the Naboru queen, participating in a war council with a ratkin general, or chatting with the three other human members of his crew, Silver is flippant and glib, freely cutting into others’ sentences and letting snarky insults fly. It’s honestly a wonder he doesn’t find himself thrown into the nearest dungeon for his cheek. All of this is accompanied by one of the oddest casting decisions for a main character: Silver looks like a bouncer at a steampunk rave club but sounds like the posh captain of a yacht club. The degree to which the story can be influenced by the player is laudable, but each choice made just makes him all the more insufferable.

The story itself is nothing incredibly original, but it does get points for providing players a real sense of choice in which direction the narrative is driven forward. Not only is there an initial choice of which side to support in the revolution, but there are lots of moments throughout the next twenty hours when further branching paths can be chosen, as well as times when an earlier choice can be reeled back by a later one, so players are rarely locked into a certain chain of events. All of this is clearly carefully planned, with many variables accounted for, and well written throughout. In many cases, the same gameplay zones must be approached from unique points of entry and play out differently, with custom enemy types and arrangements, while a few special instances feature all-new areas or levels omitted entirely depending on choices made. 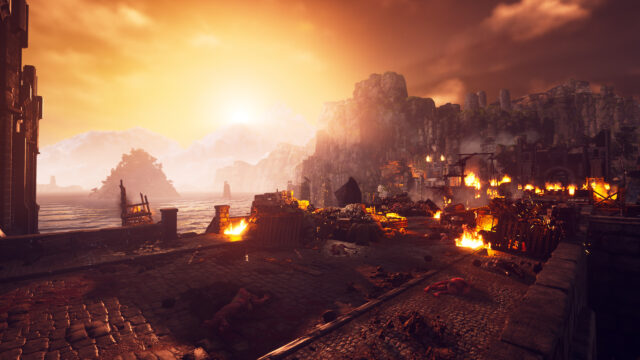 Will you help the rats in their fight for freedom or will you aid the Naboru in pushing the rat invasion back across this bridge? It really is completely up to you.

The game’s surface-level presentation is fairly solid, with good-looking environments to explore. Character models, however, aren’t a strength; hair, particularly, often looks like a muddy texture hastily applied on top of the model. Players aren’t able to put much of their own stamp on Silver, as the game doesn’t include any character creation options. Stats can be upgraded as experience is gained, though it’s a little odd that the game seems to actively discourage the player from investing into specific stats, pointing out that certain ones are far more useful while others can be neglected.

Perhaps The Last Oricru‘s most lamentable shortcomings, however, are its technical issues: bugs, game-breaking and otherwise, permeate the game. One caused NPCs throughout the zone to suddenly turn invisible, while remaining able to be interacted with, whereas a far more serious bug kept a quest from being marked completed even after being turned in, which, in turn, kept a critical escape route closed. In many games, just reloading the last save file would mitigate such problems, but each playthrough is only provided a single, autosaved game file, making the problem irreversible since a new save had already taken place. While the decision to ensure that choices carry weight is understandable, in this case it also necessitated a full game restart (meaning at least four hours of progress lost), with fingers crossed that it would work the second time around. The slight silver lining is that it provided an opportunity to make different early-game choices and see a completely different way the story could unfold.

I am not such a purist that I can’t enjoy a lower-budget indie take on the Souls-like formula, and the team at GoldKnights shows its chops in several of The Last Oricru‘s aspects. The writing and world-building are enjoyable, and the vision of giving the player lots of choice in how the story should unfold has been well realized. But when it comes to combat and performance, the game is a mess. Even if one is lucky enough to avoid game-breaking bugs, combat is executed so poorly that it spreads its taint onto the rest of the experience. When having to restart a game completely due to a bug isn’t even the worst issue encountered, I think that about says it all. In the end, the development team has much to prove to bring the gameplay in line with the good elements it showed it is capable of.