A Love Letter to Classical RPGs, Written in MS Paint

Perhaps spurred on by both the critical and financial successes of other solo-developer games with retro graphical style, such as Stardew Valley, others have found the creative outlet of game design as something they’ve been called to do. Enter into the gaming scene the latest 2D platforming turn-based RPG titled The Greater Good, created by Sam Enright. While never achieving the “great” part of its title, the game at least isn’t too far from hitting the “good” part.

The Greater Good finds players in control of the main protagonist, Flint, an army grunt in the employ of main antagonist King Kro. Flint isn’t really too sure of his past or the actions he’s taking part of in Kro’s army fighting resistance troops. This comes to a head early on when Kro, bent on wiping magic from the face of the world and replacing it with mechanical technology, paradoxically teams up with a magic-loving red demon. Flint is revealed to have elemental magic powers, so Kro attacks and easily defeats him, sending Flint floating away, left for dead.

If this were the end of the story, the game would be about ten minutes long instead of the approximately ten hours it actually is. However, Flint floats to a town in the resistance, is healed, and told all the evil Kro has planned. Thus begins the journey to defeat Kro and revive a long-dead elemental tree that once crashed on the planet, growing and spreading elemental magic throughout the world. 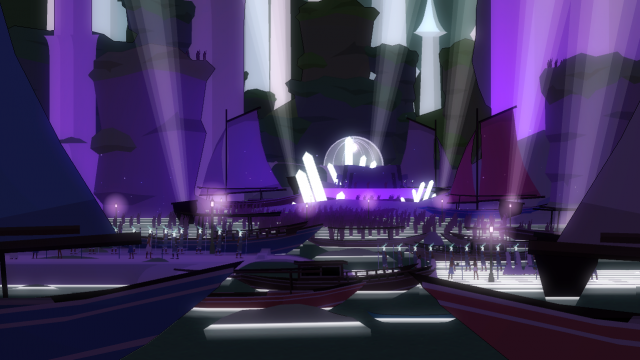 Background graphics are sometimes impressive in their scope and lighting.

The story is quite solid for such a short game, with a substantial world history and a tight, diverse cast of characters. Flint is the main character and a bit naive about his own past and what he’s set out to do, but this often leads to hilarious situations and interactions with others. Marlo is a resistance fighter who teams up with Flint, first dragging him along on resistance fighter tasks, then himself becoming a part of Flint’s story. Smoke is a shadow elemental wolf who’s been around for centuries and is focused on getting Flint to help him rekindle an age of magic, while Caya is a princess seemingly along for a fun adventure. The individuals each get a few funny moments to shine on their own, but none really change at all over the course of the game. Only Flint grows as a character, and that takes place mainly in the first half-hour.

Gameplay is similar to Ubisoft’s Child of Light, a 2D platformer with active turn-based battles. Flint can move left or right and jump through the environments he finds himself in. Battles are not random encounters, but but rather trigger by running into enemies visible on the screen. Many encounters can be skipped by simply jumping over enemies, but when combat does ensue, the screen changes to a battle screen with allies on the left, enemies on the right. Battles are classic turn-based affairs with an action gauge under each character filling up until it pauses for command selections. Players can attack, use spells that consume MP, or perform skills that pull from a shared skill point pool. Most magic is learned by equipping elemental tomes on characters, although weapons can offer them too, while others are innate abilities. All in all, the battle system is straightforward and easy to master.

The highlight of the battle engine is the skill system, which allows for unique character abilities to be used to great effect, such as stealing or raising party attack or defense. Unfortunately, this system is hampered both by a short skill meter that only replenishes when regular attack commands are used and overly-long skill animations. Boss battles require more skill and planning than most regular encounters, and without careful study of tactics and a healthy supply of restorative items, the Game Over screen can become a common sight for unprepared players. 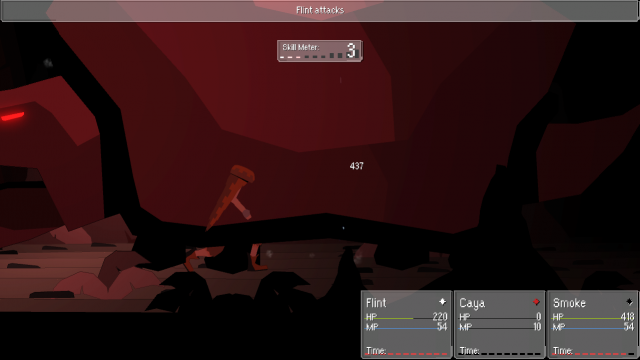 The battle system is solid, but a short skill meter will make you lose your head… or Flint’s.

For the most part, gameplay works well. Where it begins to fail is more the fault of the unique graphical style than anything else. Graphics have been described by creator Enright as a flat or stylized 3D, but make no mistake, this is 2D, 2.1D at best. The characters and the vast majority of the game are created with flat polygons. Effects such as lighting and some elements like the sun, smoke, and clouds do offer more than just a flat experience, but those are the exceptions rather than the rule. The graphical style makes some platforming difficult as places Flint can jump to don’t necessarily look any different than the background art, leading to confusion as to where to go and what Flint can and cannot walk on. The few instances when entering a building or alley is required are made confusing because entry points are only identifiable by a message that appears on the screen when Flint is in the exact right spot. Running quickly or jumping can easily cause players to miss the areas they need to enter. While it could be argued that this increases the challenge by forcing players to explore every corner, minutes spent traversing a town half a dozen times to find the entrance to the inn are not enjoyable minutes.

The lighting decisions made in The Greater Good are quite interesting. On a positive note, this game pays more attention to lighting than many other indie titles. The sun beating down in the desert, the towns shining in the night, and the light sword equipped by Flint are stunning examples of great lighting design decisions and implementations that elevate otherwise blocky, bland graphics. The repeated use of dark cave systems is just the opposite. Too often do players find themselves navigating barely-lit dungeons with only a hint of character and enemy silhouettes. Turning the in-game brightness setting all the way to max helps some, but what could be unique underground environments are too similar when viewed with little to no light. As a minor note, the text in The Greater Good is a pixelated blocky font straight out of the Commodore 64 era with inconsistent use of text shadows. Occasionally in longer strings of text, some words will have a black shadowing effect behind them and others will not, independent of background colors or lighting. This looks like a mistake as sentences become, in effect, random mixtures of bolded and unbolded text. 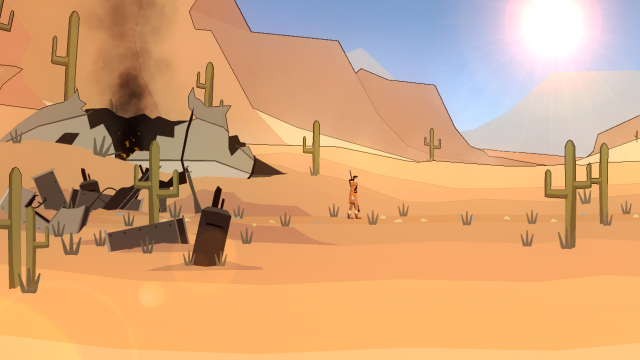 A seemingly barren desert still has plenty of polygonal plants.

Enright’s past as a music producer shows in the The Greater Good’s vast score.  Over 25 tracks play in throwback midi fashion throughout the short adventure. While none of the music hits a particularly memorable note, it also didn’t necessitate use of the mute button. The same cannot be said for in-game sound effects, however. The jump sound and the annoying clickity-clack of text appearing on-screen get old very quickly and detract from the pleasant sounds of the background tracks.

Overall, The Greater Good is a decent enough game, with graphics being the main mark that often hinders the game rather than helping it. They simply didn’t work at times as I didn’t know where to go because a rock formation that seemed part of the background graphics was actually something to jump on, or the entrance to a tavern was between two other background images. Other than that, the battle system is tried and true, with a decent amount of strategy raising the difficulty. The story has an interesting premise, sees a satisfying conclusion, and even has a small epilogue. The Greater Good is a solid, interesting first attempt by Enright.