SWERY has garnered a distinct reputation as a writer, and his latest title, The Good Life, is no exception.  Billed as a murder mystery at the forefront, players would expect to spend their time in the game finding clues and use their deduction skills.  What is presented instead is an Alice in Wonderland series of events that will lead players down a rabbit hole they were not expecting.  The Good Life has some unique twists and turns, providing a few fun story beats while poking fun at itself.  However, the game also suffers from many of the same issues it tries to make jabs at with gameplay that doesn’t go smoothly.  Players are left with a lot of insanity unchecked within the game as they head to their next repetitive quest.

The Good Life has the player control Naomi Hayward, a sarcastic down on her luck photojournalist, who is in deep debt with the newspaper conglomerate Morning Bell News.  Naomi is sent to find out the secrets behind the happiest place in the world, Rainy Woods, a sleepy hollow deep in the British countryside with quirky inhabitants.  One of the locals, Elizabeth, tells Naomi not to go out at night, because she may not be ready for what could potentially happen.  After such a conversation, curiosity takes hold of Naomi and she sets out to solve the mystery as to why residents in Rainy Woods have been transformed into cats and dogs.  Elizabeth also becomes harder to track down, and she is soon found dead with the town is reeling in response.  Naomi now has an added interest in finding out the secrets of Rainy Woods and solving the case of Elizabeth’s murder. 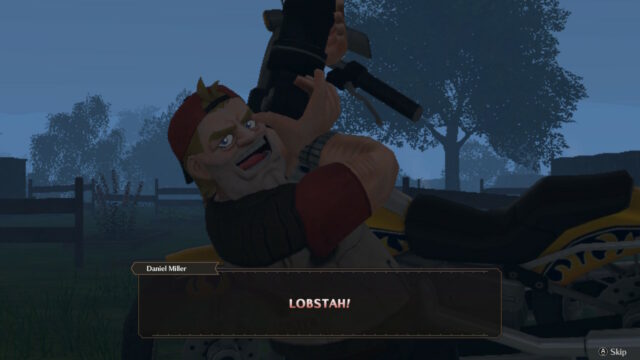 Yes, this rival journalist says this every time Naomi meets him.

The Good Life focuses on three major clues that are found at the scene of Elizabeth’s murder, and tracking them down focuses players into a crazy story.  These items end up being the only thing that carries from one thread to another, making it hard to connect with anything happening, as the game doesn’t even pay attention to itself.  Also bizarre is Naomi’s complaints of how talking to NPCs is the most boring part of a role-playing game.  This is self-defeating in a game of this style, where conversing with characters is very important to be invested in the story and the characters.  Humour such as this might be charming if it wasn’t so accurate in its own case.  Rainy Woods is inhabited by one-note quirky characters, making them very hit or miss on how well they are received, though how those archetypes tie into the wacky adventure Naomi finds herself in does make for some interest.  What charm characters do have wanes quickly with stilted dialogue and Naomi constantly shouting her catchphrases “Yeah Baby!” or “Goddamn Hellhole!” in every situation.

Naomi soon gains the ability to transform into a cat and a dog like the townspeople.  This gives Naomi three modes of gameplay.  As a human she can kick things, use a pickaxe to dig for minerals, take pictures, or later on, ride a sheep for speedy movement.  Taking photos can be for quests, or to upload through Naomi’s computer for extra cash, gaining more funds by matching to one of five buzzwords that generate every Monday and Thursday.  Her cat form unsurprisingly gives her lots of agile actions such as scaling marked walls and also pounce on prey for ingredients.  Her dog form acts as an enforcer, best able to defend against enemies, and can also track down scents by memorization. 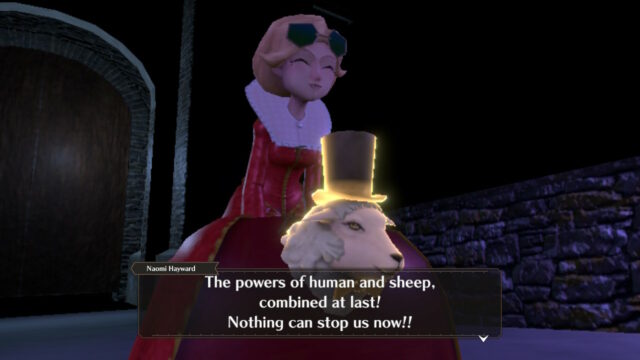 Some costume clipping makes this look more literal than it was meant to be.

No matter which form Naomi takes, she will have to contend with multiple status bars.  There are meters for health, alertness, cleanliness, hunger, and stress, but juggling each bar is annoying and there are moments where Naomi just gets hungrier at a faster rate, or is stressed out and unhealthy because it is raining out.  That means having to obtain food, sleep occasionally, and ensure that Naomi is healthy throughout.  Otherwise, she’ll catch a cold and lose health and stamina, causing travel from one point to another to take longer due to a smaller stamina bar.  Naomi has a home that helps her manage her needs, where she can cook, grow a garden, shower, change clothes, sleep, read emails, or upload photos while also working as a central hub.  The lack of urgency makes for a relaxing trip but does not really fit with its motif of a murder investigation.  Sidequests pop up to help collect funds to keep Naomi healthy but can be avoided without missing anything other than occasional attempts at humour from the situations and quest givers.

Every main quest in The Good Life follows a simple plan.  Walk over and talk to someone, perform a combination of three particular things, then keep talking until the arc is completed.  These three things are: using an animal form to follow a straightforward trail, a fetch quest, or lifting and carrying things from one place to another.  Cats will always need to walk around and climb walls to enter a new location.  Dogs will always have to memorize a scent and follow puffs of green smoke in a straight line or else it is game over.  While repetitive and simple, these are most enjoyable quests.  Meanwhile, transport quests quickly become tiresome as when Naomi picks up something she lurches around in a looping circle to get her bearings and often bumps into things soon after picking the item up, in many cases this causes damage or restarting from the beginning of the carrying quest.  As these controls feel like a hybrid of regular controls and tank controls they are hard to get used to and infrequent enough to not be memorized.  There are some unique events, such as a drinking game that involves using the directional buttons to keep Naomi balanced, which is a curious combination and feels like a missed opportunity to make a mini-game that better fits the action. 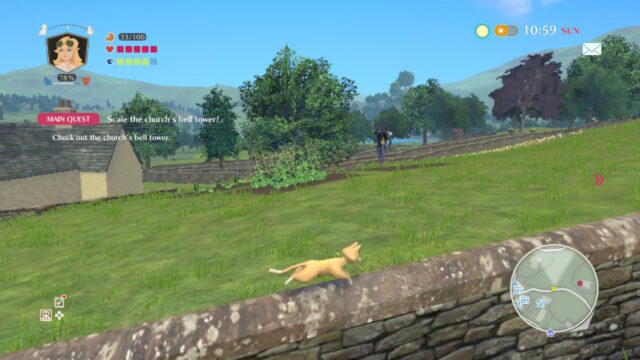 Just a transformed cat running across a brick ledge to get to a bell tower.

Talking, fetch quests, and looking at status bars is how the game passes as combat is nearly non-existent.  Outside of a boss fight, the only other guaranteed combat is against badgers.  Badgers end up being hard to face unless in dog form for the extra endurance.  Attacking bigger animals is a near-death sentence because their health bar is so high and take chunks out of the player with each successful hit.  The camera is also an enemy because it is so frustrating during fights with agile attackers like a fox, as they dart through Naomi making them spin the camera around constantly to find the enemy.  Death in The Good Life takes half of the player’s currently held funds, making trips to the ATM to deposit money useful when going out exploring.  Oftentimes it’s easier to just run away from combat and avoid the risk entirely, with music prompting when a badger is nearby.

Unfortunately, The Good Life looks and plays old, with graphics that feel like they come from a couple of console generations ago.  Though it was the goal, rustic and scenic are not words that can be applied to the uncanny character models and flat backgrounds, especially when graphic glitches come into it as well.  The old camera isn’t good at centering quickly and occasionally causes Naomi to cut into backgrounds.  The music varies from good background noise to comically jarring depending on which quest the player is on.  Voice acting only pipes in during the major story scenes and is a highlight when it gets a chance to shine.  However, the characters are more regularly reduced to spouting the same catchphrases ad nausea until those words cause a shudder of memory when heard outside the game’s confines.

The Good Life has a name behind it in SWERY, and as such, the story brings all the insanity and the confusion one has come to expect from his previous titles.  There is scope for the humour to work, but factoring in fighting with the camera and struggling with the controls the whole experience is just not worthwhile.  In a self-fulling prophecy, Naomi points out a lot of faults in games that The Good Life just blithely repeats itself.  Throwing a crazy ad-lib together and keeping fingers crossed the game works may have worked in the past, but this game has none of the fun or the charm to be successful nowadays. 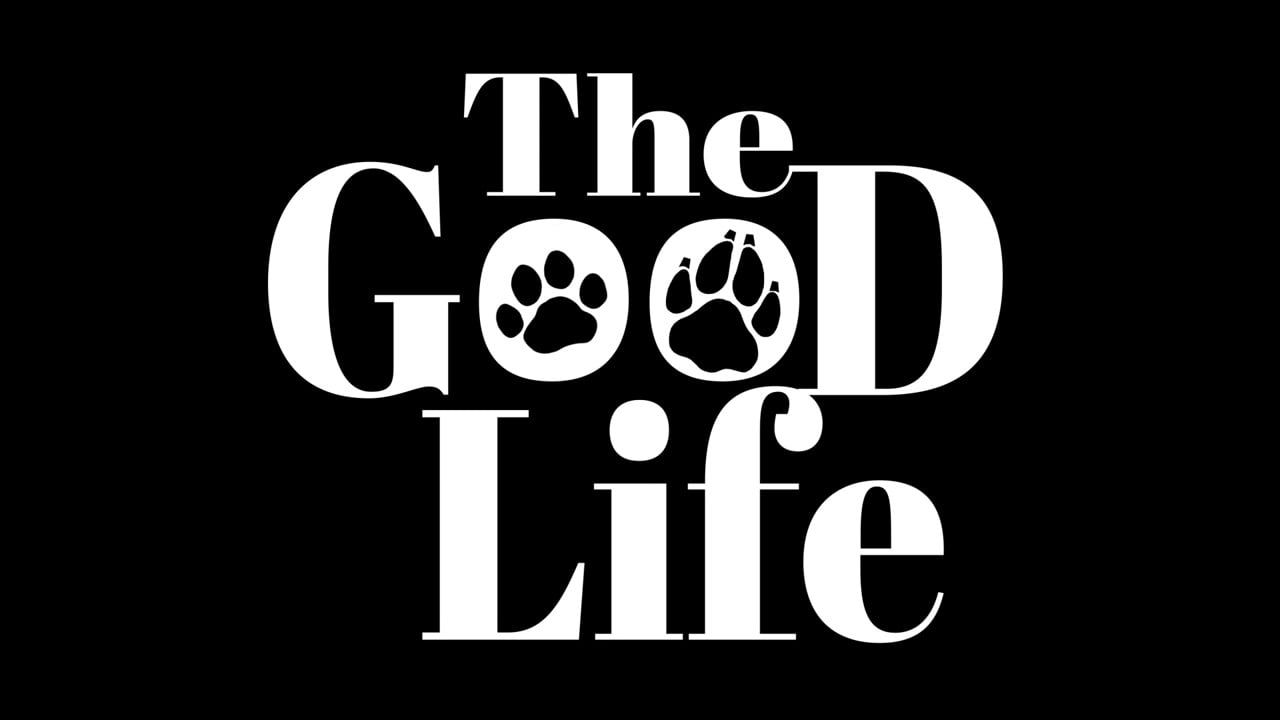