These Hearts Will Go On

Long ago I decided not to try very hard at keeping up with everything in the Tales universe, which is now one of the most voluminous series among RPGs. Every five years or so I’ve ended up playing another though, and Tales of Hearts R became my most recent choice. Even a quick perusal of the available information makes clear that this is a complete remake of a very well-regarded original Tales of Hearts on the DS, but that rendition never came out of Japan. This remake occasions strong negative feelings for many, but even with the plethora of issues I encountered, enough was entertaining that I stuck with the game for its entirety without major regret.

Kor Meteor is a young man who has lived in an isolated village, training with his grandfather for his entire life. Things get unsettled when the sister and brother pair Kohahu and Hisui Hearts shows up in the village, fleeing from a cold and malevolent woman named Incarose. Incarose kills Kor’s grandfather but is temporarily driven off when Kohaku willfully scatters her emotions around the globe. Doing this prevents Incarose from obtaining what she sought, but also ensures that this dangerous foe will not just go away. Seeking vengeance for his slain grandfather, Kor accompanies the siblings in the endeavor to put Kohaku’s self together again.

Hearts R certainly throws out plenty of interesting ideas, from a woman shattering her emotions and gradually regaining them to an empire that is rife with internal power struggles and not simply an evil entity. The execution of these elements is unfortunately lacking, as the narrative has horrid pacing and leaves most of its intriguing elements examined only superficially. What feels like the climax is nothing close when it comes barely halfway through the narrative, and this odd momentum makes the many tangents introduced in the first half come across as unnecessary padding. Plenty of scenes drag on to a great degree when the player is able to deduce their point long before the characters acting them out do, displaying that judicious and vital editing was not performed. There is also the repeated odd choice of having dialogue involving already encountered and voiced characters remain unidentified until a reintroduction has taken place, which speaks to a lack of confidence in the player’s short-term memory.

Characters and their personalities do eventually show some depth, but it requires quite a bit of patience on the player’s part to experience this. Skits are a hallmark of this series, and many of the ones found in Hearts R showcase the primary character traits of the cast repeatedly. Encountering Hisui’s obsessive protection of his sister ceases to have any appeal after a few depictions, yet it keeps coming up throughout the game. There are some additional facets of the cast members’ personalities to be found through persistence, but doing so demands the experience of many misfires. Some of the most worthwhile moments come from inconsequential bantering between the characters after a battle ends, not during the story as a whole. 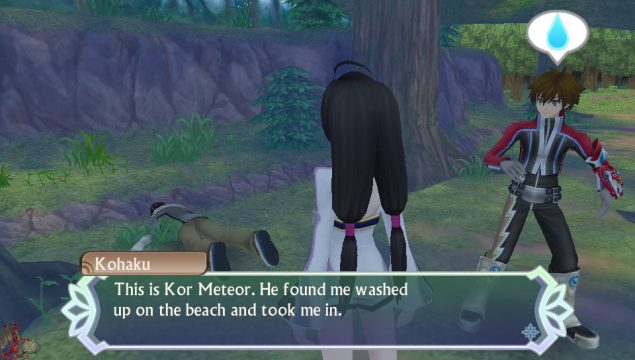 Kohaku neglects to mention the reason she isn’t wearing, and refuses to wear, something for her lower body. It’s a doozy.

Randomly encountered opponents will accost the party quite a bit, and dispatching them is quite absorbing. The player directly controls one character while three others are guided by AI, and all of them run around the combat zone simultaneously coming to direct grips with the opposition. Simple button mashing is a somewhat viable tactic for single enemies, but groups of them tend to complicate matters by interrupting combo strings through their attacks. Any kind of magical action comes with the need to stand motionless for a moment to charge it, which is another opportunity to enterprising enemies to interfere. Adversary AI is not brilliant but usually manages to be persistent enough to demand attention, and the game’s difficulty can be switched at any time to simplify or toughen the task of taking down foes. Plenty of depth is present for those who wish to become invested in the systems, yet fighting is quite entertaining even on a surface level.

Character progression in Hearts R is an interesting divergence from the norm and requires active player input. Each level gained provides some points that don’t do anything until the player manually applies them toward the improvement of five different aptitude areas for every character. These areas provide fixed bonuses that range from statistic increases to new battlefield options, but which area is increased is left completely up to the player. Maxing everything is not feasible without a great deal of grinding time, so figuring out what to improve and when makes a concrete difference in combat.

Another interesting aspect of character development comes from the bonds shared by the cast. Experiencing various events and simply spending time alongside each other in combat increases the level of trust between members of the cast, and this is reflected via a specific mechanic that allows multiple skills to be used by someone other than the person who learned them. Each member of the cast has a specific elemental affinity and an aptitude for talents, such as inflicting certain status ailments or netting a bigger reward from fights. As the cast members’ bonds increase these things can be applied to everyone with sufficient patience. It greatly increases the strategies available to the player and rewards shifting party members around often.

New weapons are acquired either through side quests or by developing characters outside of battle, but their protective gear is gained via the usual methods of purchase and exploration spoils. Hearts R seems to expect players to keep only some of the cast ready to go at a moment’s notice, because garnering the cash necessary to purchase new goods for everyone cannot be accomplished without grinding. Aside from the expense involved in acquiring the materials, inventory management is thankfully efficient, briskly conveying the information needed by the player without needing to wade through tedious extra text. Having a cap of fifteen for every item on hand is odd, but enough to let players get by. It is bothersome during the numerous instances of enemies dropping certain spoils of which the party already has the maximum available stockpile, however. 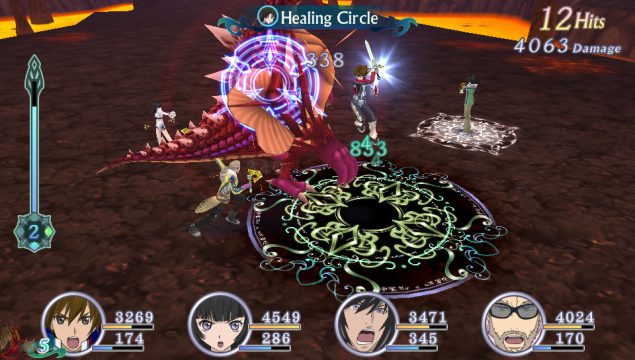 Such intense expressions in response to a healing circle on the screen!

By having a world map to explore and featuring plenty of things to find by doing so, Hearts R is a bit retro in the current RPG climate. Being able to explore and find things off the beaten path is entertaining, especially since the enemy balance is solid enough that the player won’t inadvertently get slaughtered just by venturing a few steps to one side. Extra recipes, plenty of side quests, optional events and more will be located if the player cares to look. Some of the things found by doing so are more interesting than the core narrative, showing that the scripting duties were apparently handed off to whomever was available that day in the office instead of on the basis of pure talent.

Plentiful Japanese voice acting is heard throughout the game and accompanies almost all dialogue scenes. Bandai Namco’s localization is a strong one throughout, featuring plenty of witty wordplay and entertaining turns of phrase to make for a more enjoyable experience than a stiltedly literal localization would have produced. The only real issue comes from the baffling choice to rename a few characters and places, causing a disconnect when the spoken words bear no relation to what is written on the screen. The performances themselves offer a wide range of Japanese voice acting styles from impressive to unrealistically dispassionate.

Motoi Sakuraba’s score is not among his more memorable efforts, though a few compositions are engaging. These tunes were rearranged from the original DS incarnation of Tales of Hearts by others, which may account for them not making much of an impression. Hearts R‘s visuals are not among the finest ever to be displayed on the Vita, but do a pretty good job of depicting the game world and making it distinct. The infrequent animated cutscenes are too brief to make much impact except as a surprise when they occur.

Tales of Hearts R comes in for a lot of abuse, and I can’t say all of it is unwarranted. I nevertheless found enough to keep me engaged that I didn’t finish until pretty much everything I could possibly do had been done, and that means the game succeeded in some ways despite having some massive problems. This isn’t a game to play primarily for its story, considering that several others with whom I discussed the happenings could barely remember anything substantive, but actually playing through the dungeons was enjoyable. Plenty of other RPGs have failed to make that happen, and I can’t come down on this one too hard because of it.