It’s been over three years since we last saw a new Tales game released in North America, and the internet backlash from this is, at this point, a thing of legends. After all that time, Namco Bandai has finally delivered Tales of Graces f, an expanded and enhanced version of the Wii original which never left Japan, to a Western audience. They say that good things come to those who wait, and in this case, it couldn’t be more true. Tales of Graces f is not only a terrific game in its own right, but it’s the best entry in the series since Tales of Symphonia was released in 2004.

Tales of Graces f begins in the small town of Lhant, where the sons of the town’s Lord, Asbel and Hubert Lhant, are getting into all kinds of trouble. Against their father’s orders, the pair head to an area called Lhant Hill to visit a meadow where the flowers are said to bloom all year round. Here they meet a strange, amnesiac girl whom they name Sophie, and take her back to town to try to find her family. Once there, they also run into their sickly childhood friend Cheria, and befriend Richard, the young prince of the country of Windor. The events that follow cement these five children as friends, and ultimately tear them apart. Each one lives their own lives, and several years later, when they’ve all grown up, they learn how the events of their past not only shaped their own lives, but might even shape the fate of their entire world.

The story is unique among the Tales series in that it’s the only game that takes place during two times of the characters’ lives. The game’s prologue, which is actually surprisingly lengthy and even includes its own boss fights, takes place when protagonist Asbel is eleven years old. The rest of the game takes place when he’s an adult, and because of the impressive amount of development the characters go through during the prologue, every single one of them is far more interesting in their adult lives. Their backstories aren’t just bits and pieces that are dredged up when it becomes important; the player gets to witness them firsthand, and this makes all the difference.

As Tales stories go, it’s also one of the best in terms of plot and pacing. The tale is cohesive from start to finish; there are no awkward disconnects between chapters as seen in Tales of Legendia or Tales of Vesperia, nor are there pacing issues such as those seen in Tales of the Abyss. The game’s villain is easily one of the most intriguing in the series, and although the cast isn’t as quirky as some of the other games, it’s much more believable. The localization is very good, though not quite as wildly entertaining as Tales of Vesperia. 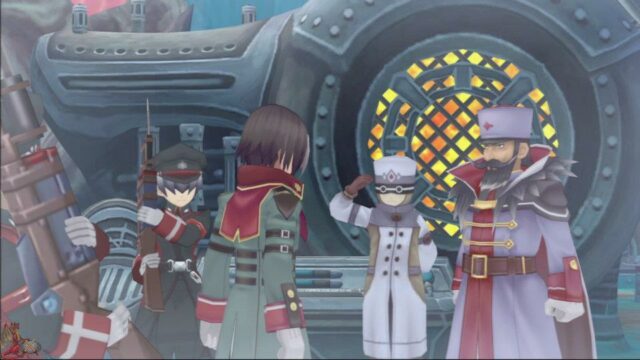 Fendel bears absolutely no resemblance to the USSR. Not at all.

Tales of Graces f also offers up gameplay that should be a breath of fresh air to fans of the series. The game finally steps back from the Free Run Linear Motion Battle System that’s been used in the last several entries to the series and instead uses a new system that forgoes traditional mana bars in favor of chain capacity. This takes the form of a number beside each character’s portrait that determines how many attacks a character can launch before he needs to rest and recharge, with more powerful attacks using more chain capacity.

Combat doesn’t diverge too greatly from Tales tradition, but it’s certainly one of the more unique systems the series has ever seen. Characters move in a straight line towards their enemy, and can launch various attacks using the X and circle buttons. The types of attacks launched by each button are different. The X button is used for normal attacks, called A-Artes, which function as a predetermined chain that can be altered by pushing the directional stick in different directions at the same time. The circle button’s B-Artes are usually similar to the special attacks seen in other Tales games, but in an unusual twist, the two types of artes usually aren’t used in conjunction, but separately. This is particularly true for the game’s protagonist Asbel, whose fighting style allows him to chain together A-Artes or B-Artes into huge combos, but makes it difficult to mix the two into a single attack. Other characters have similar variances in their styles; some have B-Artes that involve casting times, while others have different restrictions placed upon switching between the two. For each character, knowing which style to use and when is one of the game’s core foundations.

There are many other smaller features that help Graces stand out from the pack in terms of combat. Players can rapidly switch control of characters in battle simply by pressing a corresponding direction on the D-Pad, allowing much more diversity in playstyle. The AI in the Tales series has rapidly improved in recent entries, and in Tales of Graces, players shouldn’t have any difficulty just allowing the party to do its own thing without any manual direction, letting players remain focused on the action. Finally, for those who’ve become accustomed to free-running, the feature is still available, although using it rapidly drains chain capacity, limiting its value.

Character customization is another area where Tales of Graces shines. In this installation, character titles, a series staple, are brought to the forefront as the primary method of growth. Each character has access to over a hundred titles, which are gained through story events, side quests, and by performing certain actions in battle. Every title provides access to five skills, either passive bonuses or new artes that can be permanently learned by equipping the title and gaining SP in battle or through side quests.

The game also offers up a terrific crafting system in the form of dualizing and the Eleth Mixer, two separate functions that work in tandem. The dualize system is the game’s method of creating new items and upgrading equipment. It can be used to cook food, create healing items, and even make miscellaneous trinkets that can usually be sold for a nice profit, providing extra cash flow. Dualizing also allows players to combine special items with their equipment, adding passive bonuses as well as permanent stat bonuses to the gear. Once the gear has been used in combat for a while, it becomes tempered, and two pieces of tempered equipment can be combined to create a gem. This process removes the passive bonuses, but the gear retains the permanent stat boosts. The new gem that is created gains the passive effects that were on both pieces of gear, and can then be equipped as an accessory. Two gems can even be combined to further enhance the effects, allowing players to constantly upgrade their gear throughout the course of the game. 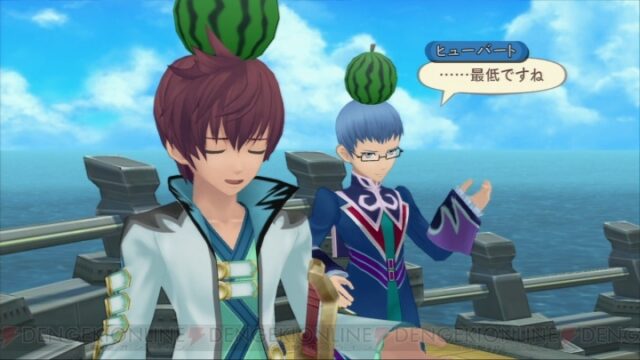 Watermelon hats are the latest trend.

The Eleth Mixer is the second part of the equation, and is equally engaging, despite its mostly passive nature. The Mixer is another method of creating items, but it works in a different way. Once an item has been acquired once, the Eleth Mixer can be used to produce more out of thin air. The Mixer has both a limited number of slots and a limited number of eleth that can be used to create items, but both these numbers can be upgraded by using it often. By setting a food recipe to the Mixer, it will be automatically cooked when certain conditions are met in battle. Creating food increases the eleth limit, allowing players to use it more before it needs to be recharged. By setting an item, there is a set chance that a copy of the item will be created simply by walking around. As more items are created in this way, the Mixer gains more slots, allowing players to set more items and recipes. Finally, players can also set special books that are discovered throughout the game, each of which provides a unique benefit.

There are several other minor systems at play in Tales of Graces f, but it would be impossible to discuss them all at the length they deserve. Suffice it to say, the title has a lot of depth to it, and although it can seem dauntingly complex at times, everything has a consistent internal logic that makes it easy to grasp, and more importantly, easy to experiment with. There’s never any fear of becoming permanently handicapped because of a single mistake, which works to the game’s benefit. It does a terrific job of balancing exploration, story, combat, and character growth in a traditional JRPG style that’s been lacking in other modern JRPGs.

Although Tales of Graces f isn’t as immediately attractive as Tales of Vesperia, to date the only other high definition Tales title released in North America, ultimately it manages to match its predecessor in terms of quality thanks to excellent art direction and its large, detailed environments. The shading method used for the models can’t compete with the fantastic cel-shading used in Vesperia, but its superior environmental design more than makes up for it.

The game’s soundtrack is something of a disappointment. The majority of the score is typical for series composer Motoi Sakuraba, and much of the time it simply sounds very generic. When it does stand out, however, it stands out as some of his most unique and enjoyable work. The voice work is quite good, especially when it’s not constrained by awkwardly slow lip-syncs. At times it can feel quite stilted, but most of the time it works well. The voice acting is present through almost the entire game, including skits and even a few major side quests.

The Tales series has had its share of ups and downs, and while its had a consistently high level of quality, almost every game in the series has had some sort of fatal flaw that prevented it from being as good as it could have been. Not since Tales of Symphonia have I played a Tales game that’s felt as whole as Tales of Graces f. It is an engaging, enjoyable, and lengthy game, easily lasting as long as sixty hours. The “Legacies and Lineage” post-game story can add even more time. Tales of Graces f unquestionably stands apart as one of the best games in the series, and as one of the best JRPGs to grace modern consoles yet.