The popularity of Sword Art Online as a light novel and anime series meant tie-in games were a certainty in Japan. Now that the series has found a significant fanbase on Western shores, it was only a matter of time before one of those games made it over as well. Sword Art Online: Hollow Fragment is effectively an upgraded version of the Japan-only PSP title Sword Art Online: Infinity Moment, adding a large amount of content and an extra story thread to the title. While the title is primarily a fun gameplay experience overall, it’s marred by inescapable narrative issues that are present from the start and a terrible localisation.

Sword Art Online features a number of characters who have been trapped in a virtual-reality MMORPG. Players take control of the main character Kazuto Kirigaya (aka Kirito), arguably the most skilled and powerful person in the game. The game they are trapped in, the titular Sword Art Online, has suffered some rather serious design failings, which have allowed one of the creators to co-opt the system to remove the log-out option and set the VR gear to kill anyone who dies within the game (or has their gear tampered with from outside). Supposedly the only way for the players to be freed is to reach the top level of the world’s massive tower and complete the game.

Hollow Fragment begins at the end of the first major arc of the series, covered in the initial season’s first half. A serious glitch causes a split from the anime series’ events and transports many players to Aincrad’s seventy-sixth floor. The glitch also appears to cause major issues with characters’ skills being lost, items becoming corrupted, and those transported unable to return to the lower floors. For reasons best not examined very deeply, it also results in a couple of characters that appear later in the series joining them. As such, players considering using it as a jumping board into the series as a whole should prepare for significant spoilers. It should also be made clear that even with the spoilers provided, players are expected to already know all of the extant characters and the events that occurred to them before the game.

The game features two stories to progress through: the original Infinity Moment story where Kirito continues to scale Aincrad’s hundred-floor tower, and the Hollow Fragment story where Kirito is teleported to another place entirely and meets a girl who cannot seem to leave the area even though he can. Players are free to progress the stories in any order, although the Hollow Fragment section features tougher enemies in general. They have an interesting dichotomy, with the Hollow Area offering tons of user freedom and exploration at the cost of direction; meanwhile, the Infinity Moment tower floors are nice and compact with obvious progression feedback, at the cost of getting repetitive after a short while. Using the Hollow Fragment sections to help break up the monotony of climbing twenty-six floors in Infinity Moment helps cut down on tedium. 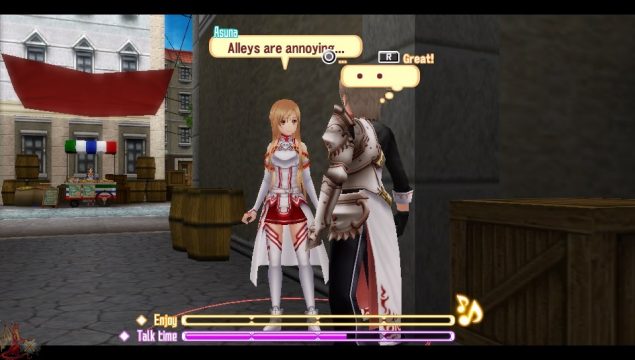 That lack of direction is the Hollow Area’s biggest issue and cause of frustration, though how much of the blame can be divided between the original design and the atrocious localisation is open for some debate. A world map with goal marker helps slightly, but players will still often have to rely upon stumbling across the correct route or hoping that others have provided the details outside of the game. Early frustration stemming from frequent inability to determine which path will progress events is compounded by a guarantee that enemies powerful enough to destroy the player will be encountered. This can be somewhat forgiven after it becomes apparent that nearly all of such enemies are optional and can be ignored, but it is hardly the most balanced means of achieving battle difficulty.

While a good localisation would certainly have helped the narrative, it still wouldn’t have dealt with very tedious levels of fanservice. It’s clear from all the irrelevant events that the game is primarily for fans, but even then events and conversations go on for far too long and provide little extra characterisation, more often than not providing nothing except the repeated unsubtle reminder that all of the game’s female cast is madly in love with Kirito. Outside of all this, what little genuine plot exists in both sections requires wading through all the fanservice and doesn’t manage to be interesting, even to those knowledgeable regarding the series. Thankfully, the controls include a button that skips through event scenes, which means players can choose to avoid the painful dialogue.

No positive adjective can be truthfully employed when describing the game’s localisation, which already had a difficult task to salvage this long-winded material. Evidence suggests that the Western version is based on the Asian English release, which is rushed to say the least. The text is full of grammatical errors and inexplicable third-person usage, and very often inconsistent in its amusingly literal translations of place names or other phrases. Unfortunately, it doesn’t just cause issue in the narrative. Tutorials, various descriptions, and item and skill names become either impossible to understand or outright misleading, and the chat system for raising affection with the game’s heroines is simply nonsensical. 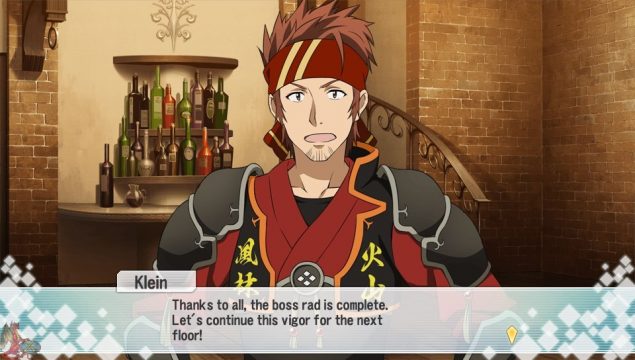 Despite being many fearsome, the rad group accomplished boss vanquishing.

These issues are a shame, because they take away a very large chunk of what is gained by a solid gameplay base. Hollow Fragment does a pretty decent job of creating a faux-MMO experience. Kirito is able to partner up with any of the other characters, including the generic non-story characters, before heading out to explore Aincrad. The battle system is a good example of something easy to learn that offers lots of depth. There are three active bars: an HP bar, an SP bar used by most skills, and a Burst/Risk gauge that affects players’ defense and attack is. The SP bar is generally the one that needs most careful watching, as the skills relying on it are the player’s most important weapons for dealing damage and distracting bosses. Fortunately, it’s quite easy to keep up by constantly praising the actions of Kirito’s AI partner, with every successful praise refilling the gauge somewhat. Status ailments are generally very effective in the game as well. There’s a lot to use in the system, although players will have to learn by doing as the poorly translated tutorials are less than useful.

The bosses in the Infinity Moment portion of the game are a lot of fun and where the faux-MMO experience works best, seeing Kirito and his companion joined by a number of NPCs to create a raid-like battle. Admittedly there isn’t much tactical forethought required; except for occasionally breaking off to destroy a regenerating body part or for some healing, going all-out on the offense is the best tactic. The Hollow Fragment story bosses lose the raid experience with only Kirito and his companion fighting, but are still a lot of fun and provide a good sense of occasion. The challenge still isn’t particularly high on most bosses with wipes being primarily caused by a lack of attention, however, this is probably the most important time when managing SP becomes critical. Standard enemies rarely provide any difficulty, excepting those times the player actively screws up and becomes hugely outnumbered. The battles are a lot of fun, and seeing this system used elsewhere in the future would be welcome, but with much better explanations.

The game’s control and skill system certainly helps the battles move along. Players can apply up to twelve skills or items for quick use with a press of one of the face buttons acting in combination (or not) with the left or right shoulder buttons, although item use is a bit difficult due to the long cast time and likelihood of interruption. Areas are usually full of intertwining paths or loot-containing dead-ends that encourage lots of exploration. The exploration aspect is further encouraged by the addition of a few side-quests and a special enemy for each floor that when finished provide extra information about that floor’s boss. 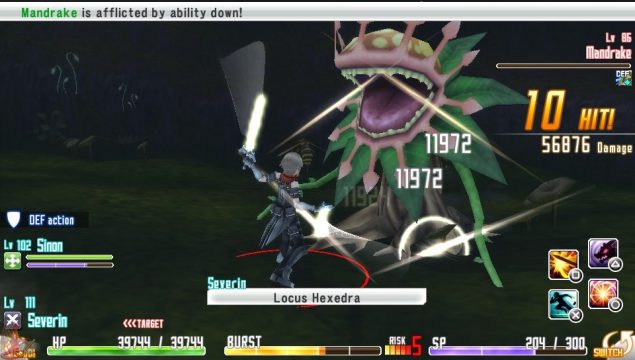 This part of the game is well constructed at least.

These floors can easily get repetitive, however. Each floor ends with a fairly straightforward dungeon that uses an identical tile set, and the quests are always one of three types: defeat certain enemies, collect drops from a certain enemy, or collect items from easily missable gathering points. The repetitiveness also stems from the scenery and enemies. While there is a bit of variation in enemies on each floor, it’s not quite enough and facing off against the same few types in each zone becomes quite tiresome. Almost no variation being needed in how players approach combat across all types means that even when a new type is faced, it’s less interesting than it should be.

Hollow Fragment features a ton of end-game and optional content, which should be where players find most of the game’s challenge, with the main story content not providing all that much if players are paying attention. Along with all of the aforementioned high-level enemies, there are several Hollow Missions — short challenges that require a player to defeat certain enemies, which is also connected to a significant additional upgrade/skill system — as well as a hundred-floor random post-story dungeon. This extra content, which is set to be added to with a free update in mid-September, will add many hours to the forty-to-fifty it will take to complete the main content for those who are able to look past the game’s flaws.

The visuals cement the game’s status as an upscaled PSP title, but with that said it doesn’t look at all bad. There’s some neat bits of scenery and layout, and the world and its creatures are enjoyably colourful. However, it suffers a bit from a fairly low draw distance — especially with enemies popping in — not a huge level of detail, and a fair amount of tile set and enemy recycling. As would be expected from a title where so little effort was put into the localisation, the game has not been dubbed into English and simply uses the perfectly acceptable Japanese voice overs; probably just as well considering what the voice actors would’ve had to read. The music is at least decent, offering some strong tracks and engaging battle themes although a lot of the environmental and event tracks are pretty generic and forgettable.

While there’s some good fun to be had from the gameplay, the localisation and narrative issues make Sword Art Online: Hollow Fragment a difficult recommendation. Those who are already fans of the series and just want to spend some time in Aincrad should enjoy their time with it, but using it as a jumping on point is a tough proposition. How much players will get out of this title will depend entirely on how much a poor narrative and shocking translation affects individual enjoyment, but it’s certain that the game is far less of an exciting product than it could’ve been. 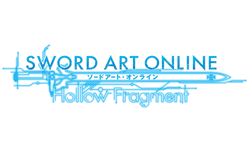