Re:ZERO -Starting Life in Another World- The Prophecy of the Throne Review

I believe that games based on books, comics, or manga have great potential because they usually have a solid narrative basis, yet, paradoxically, they tend to be utterly disappointing. Unfortunately, Re:ZERO -Starting Life in Another World- The Prophecy of the Throne is another case that might dismay fans and newcomers. Though it comes from the Re:ZERO series of novels that have been so successful that there have been adaptations to manga and anime, the game just doesn’t really stand up to that level. While it includes an intriguing story, the talent of many of the anime series voice actors, and the addition of brand-new characters, it falls short in all of its game-specific aspects.

The game sees players taking the role of series protagonist Subaru Natsuki, a guy who has been teleported to a different world where he acquires a strange power he calls “Return by Death”, which takes him back in time before his demise. Keeping this ability a secret, Subaru works as a servant in the local lord Roswaal’s mansion along with the maid twins Rem and Ram who have strong magical powers. Among all the residents of the mansion, his most cherished friend is Emilia, a silvered-haired girl who happens to be one of the candidates to become the next ruler of the Kingdom of Lugunica. The story of The Prophecy of the Throne begins when everybody is getting ready for the royal selection, and, out of the blue, an emissary sent by the royal castle appears in Roswaal’s mansion to let them know that this selection has been postponed. As a consequence, Subaru decides to go to the royal capital to find out why.

Upon their arrival, Subaru and his friends discover that the Dragon Stone prophesizes that there should be five candidates from whom the council of wise men will choose, but there are six. The selection is thusly postponed while they ascertain the fake candidate. As Emilia is suspected to be a false priestess, Subaru investigates the truth of the fraudulent maiden to defend his friend, but other threats in the way lead to his death. Subaru’s death-defying ability gives him the opportunity to retry the loop of days following the emissary’s appearance, and he tries to change events to prevent unfortunate outcomes. Retaining all the information from previous lives, he unravels the mystery about the sixth candidate little by little. The game provides an interesting and engaging story, and the supervision of Tappei Nagatsuki, the author of the series, has clearly aided its narrative. 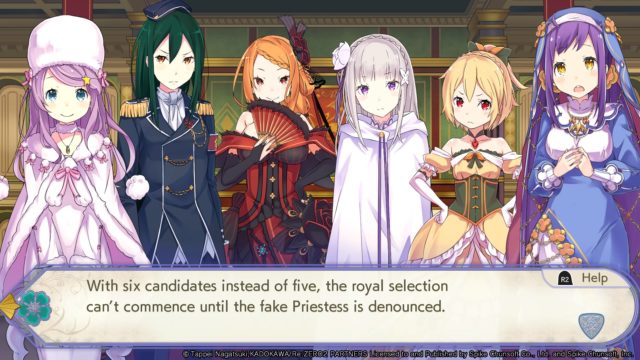 Out of the six candidates, who looks more suspicious?

The intriguing story is matched by some characters new to the Re:ZERO series, such as Melty, a nun loyal to the Transcendent Dragon Church who is one of the six candidates; Tiga, a young knight designated to protect Melty and who gets along very well with Subaru; and Wolf, a masked assassin who changes masks depending on his emotions and whose intentions towards the royal candidates are unclear. Every new acquaintance has a well-thought-out background and an important role in the story. With original series artist Shinichirou Otsuka providing the designs, they fit right in with the existing cast and make interesting additions for fans.

After a promising set of elements related to the story and the characters, the first weak spot of the game emerges. The main concept is that players gather information to solve the mystery, and playing detective undoubtedly sounds fun. If one were to think about solving a mystery, one may imagine exploring, questioning people, or sneaking into places, but The Prophecy of the Throne has other plans for this feature. The story progresses mainly through conversations that come one after another, but the player has almost no influence in them nor the freedom to choose who to talk to, becoming more of a spectator than an active part of the investigation. Moreover, these dialogues make up a large majority of the game, so there is little time where the player provides meaningful input. The lack of players’ impactful choices renders the game a bit boring and unfulfilling.

Combat offers the small percentage of the game where the player actually plays. It consists of missions in which the player chooses the initial strategy through conversations. Each mission has success conditions, though in some cases the story can progress even if the mission is failed. During a mission, players only control Subaru, and since he is not a fighter, his role is to give orders to the rest of the party. Subaru can use items, think, interact with some characters or places, or move with a limited range of movement for each turn. Allies act following the orders given in the initial strategy or act as a result of an interaction with Subaru. While missions may not be very amusing, they’re the most interactivity players will get out of Re:ZERO -Starting Life in Another World- The Prophecy of the Throne. Even if players find this system satisfying, they will likely be disappointed because these missions are scarce. 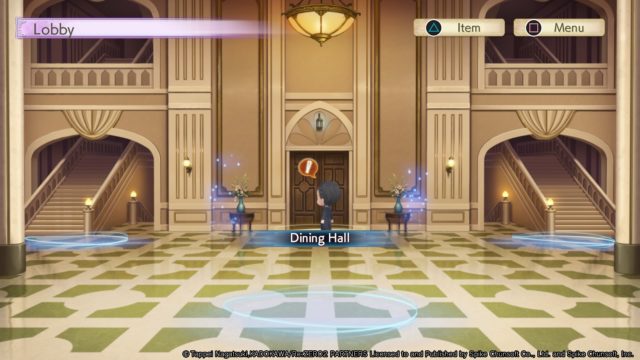 Players control a 3D version of Subaru during missions and exploration.

There are a few moments of exploration taking place in 3D environments, with players controlling Subaru. Exploration is very limited because it usually consists of a “go and talk to X” formula, preventing the player from going to other places or interacting with many characters. There are glimpses of the world map a couple of times, but the moment to explore it freely never arrives. Even a small veneer of choice over events to witness, people to speak to, or places to go would have made for a more engaging experience.

The artwork and the soundscape are two aspects that may attract players. The game is fully voiced, and it features the same cast that gives voice to the characters in the anime series. The only language available for this review was Japanese, but the game will also have an English version as a day one patch that should be notable as well. Visuals follow the style of the manga and anime series and are really inviting. Every character has a set of different movements and poses that are shown when they are speaking. Unfortunately, the big-headed 3D versions of the characters used in missions and times of exploration don’t look nearly as good as 2D character portraits.

Featuring a good story with the incorporation of interesting new characters and a mystery to solve, Re:ZERO -Starting Life in Another World- The Prophecy of the Throne has the components for an enjoyable game. However, the gaming elements are greatly lacking, and though some may be fine with just reading their way through it, those hoping for a more interactive experience will be sadly let down. Going through dialogues for hours without battling, solving mysteries, or having the freedom to explore just doesn’t live up to the billing as a tactical adventure. Fans of Re:ZERO and players who enjoy good stories and don’t mind having a passive role could give this game a chance, but shouldn’t get their hopes up too high.

Tags: Chime CorporationPS4Re:ZERORe:ZERO - Starting Life in Another World: The Prophecy of the ThroneSpike Chunsoft