Supreme Executive Power Derives from a Mandate from the Masses, Not from Some Farcical Aquatic Ceremony

Kickstarted tactical RPG Regalia: Of Men and Monarchs has made the leap to console after successfully starting its dynasty on PC and Mac in 2017. Developed by Polish studio Pixelated Milk, with another Polish studio Crunching Koalas working on the console port, Regalia certainly has a lot going for it, particularly in its audio and visual presentation, but its generic battles and some minor control and UI issues prevent the Royal Edition from truly ruling the realm.

Regalia‘s tale concerns the fate of House Loren, which once ran an empire centred around the keep at Ascalia. After being kept in the dark about this history, House Loren’s current scion, Kay, discovers his birthright while at his father’s deathbed, and ventures to Ascalia with his two sisters and bodyguard in tow. Here, they discover not only that the inheritance is now little more than a ruin, but House Loren has a vast outstanding debt that Kay is now responsible for. Kay is left with little option than to try and rebuild the realm to clear the debt, though he does gain the support of the ghost of House Loren’s founder, who agrees to help guide Kay in kingdom management.

It’s apparent right from the start that Regalia isn’t a game that takes things very seriously. Humour is present in abundance and one of the game’s stronger points. It can be a bit reference-heavy in certain areas, including borrowing some quotes from various sections of popular culture verbatim, but it uses those references well in context. The game’s cast adds lots of life to proceedings, and the dynamic Kay has with his sisters and subjects remains a highlight throughout, thanks in part to some great voice acting.

It’s clearly never meant to be deep, but the main issue with the overall story is that it often has no real bearing on the vast majority of the player’s actions. The primary objective for every chapter is simply to complete generic tasks: such as completing dungeons, crafting, or raising affinity. This is plenty enjoyable for a few chapters, but in the latter portion of the game this becomes a bit tiresome, partly as the limited variation in battles starts wearing thin. Some of the chapters will include a dedicated extra quest that does factor into the story, one of which is interesting as it introduces a fun negotiation chain mechanic between multiple parties, but also galling in that the mechanic is never seen again afterwards. 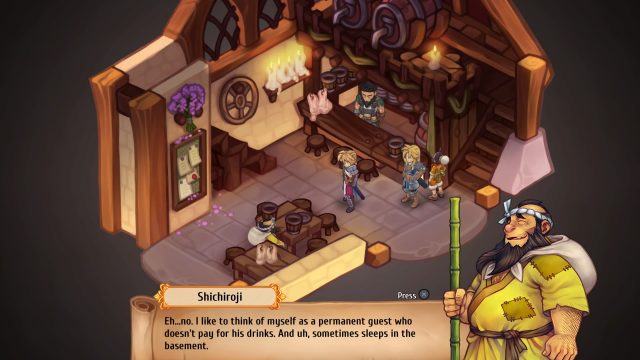 The turn- and grid-based combat sees up to four party members facing off against differing numbers of enemies based on the battle. Each character gets his or her own slot in the turn-order, based on the initiative stat and any potential status effects. Characters can move a certain number of squares and may undertake that movement at any time, even splitting it to move both before and after any other actions. Each character has five unique skills to choose from for their action, many of which can affect multiple squares. Players can also spend command points — one granted to the party every turn — to give that character extra actions, though some skills have a cooldown period before they can be used again and special finishing skills require two command points simply to use. It’s a straightforward combat system, and it’s easy to get to grips with the ins and outs of things, but there is enough depth and nuance even without aspects like elevation and attack direction incorporated. Regalia introduces its own spin on tactical combat in a few ways, most notably by not including healing and instead using a restorable shield that introduces a nice trade-off between safety and attack.

Combat in the end turns out be good, but not really enough to sustain the game on its own. The main issue with combat is that there is often little to distinguish one battle from the next. Different types of enemies will have appreciably different skills, but players will end up fighting what amounts to the same battle with a slightly different battlefield layout many times throughout the game. Regalia also has some control issues: the method of selecting skills using a combination of the right trigger and left analogue stick is awkward, and it can be easy to accidentally do irrevocable actions such as ending a turn or using a command point. However, it should be noted that patches have been released for the PlayStation 4 version that have alleviated a few of the early issues, most notably the one that made it too easy to accidentally load instead of save.

Instead of characters leveling up individually, when the party levels up it unlocks an extra slot for each character than can be used for various passive bonuses that may include attribute increases, resistances, skill adjustments, and more. There is also a rudimentary equipment system that gives characters slots for a weapon and a couple of accessories, though these enhancements come as passive bonuses rather than raw power-ups so equipment strategy is not simply a matter of picking up new items that are more powerful. There is a bit of kingdom building in the game, but this simply amounts to collecting enough resources to upgrade and build facilities, with no real decision making involved. The decision making doesn’t hold any relevance to the plot or have any serious lasting effects, outside of which recruitable characters players might get. 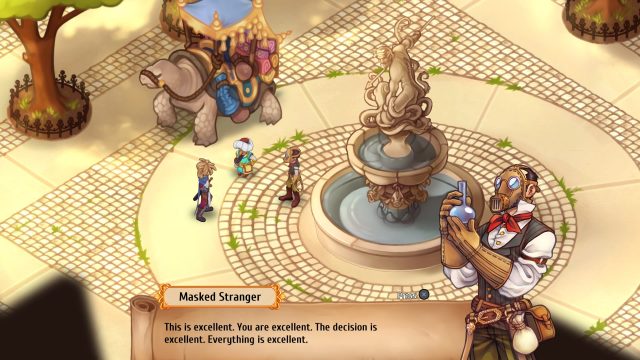 Regalia is divided into seven chapters, each with the objective of finishing a certain number of quests, and maybe a story quest, within the next fifty-six days. Nearly every action — travelling a space on the world map, exploring part of a dungeon, spending time with an ally, etc. — takes up a day, so some planning is required. However, with even just a basic plan it’s not at all hard to achieve the required number of quests (five in each of the first three chapters, seven in the second three), and any additional quests accomplished are rolled over into the count for the next chapter. One thing that is very welcome is the adjustable difficulty on the normal difficulty setting. Players can alter the balance in multiple ways, such as changing the multiplier for enemy or ally damage or turning off the possibility of player attacks being dodged, and the game also has a mode for those just playing for the story to skip any battles they wish.

Some of the most engaging parts of the game take place in the various choose-your-own-adventure style encounters that can be found in the many dungeons on the world map. These range from the simple — coming upon an obviously fake “toll booth” — to the more ridiculous — two competing feline factions asking you to side with one of their lieges. These provide some engaging vignettes, with a few neat little puzzles included, and go a long way to helping break up the combat in dungeons.

Sound and graphics are both strong points for Regalia. The strongly-performed voice acting in particular really helps bring the game to life. It would be nice if it was more present for the character-specific events when raising affinity, but it nevertheless is present and welcome for all of the important story scenes. The music also is enjoyable to listen to, with the one mark against the audio being that the battle designs result in enemy battle cries often being incessantly repeated. The art design makes the game very pleasant to look at, with a vibrant colour palette, good artwork, and some great, fluid character animations. However, the UI can be a bit unclear at times, and things aren’t helped by a small font size that will likely bit difficult to read in areas on many console setups.

Regalia: Of Men and Monarchs is certainly one worth checking out, even to those who aren’t too keen on tactical RPGs. Its friendly difficulty options cater to all abilities, providing strong challenges to those who want it and not getting in the way of those who don’t, while the humour and vibrant graphics provide a great first impression. Its combat and gameplay loop can become a bit stale towards the end, with the kingdom building only playing a bit part and there being a few UI and control issues to overcome, but there’s still plenty to like and no reason whatsoever for the developers’ dynasties to end here.