At first, I was skeptical of Pokémon: Let’s Go, Pikachu! and its seemingly drastic shift from the established Pokémon formula. One factor that aided in my skepticism was the exclusion of gameplay aspects like wild battles, abilities, and held items. It also did not help that the game tied itself to the mobile phone game Pokémon GO, which at the time I had no interest in. However, as the months went on after its initial reveal, I decided to give the game a shot and pre-loaded it onto my Nintendo Switch.

Pokémon: Let’s Go, Pikachu! takes things back to the region of Kanto, where it all started. As a remake of Pokémon Yellow, instead of being given the choice between choosing to start with Squirtle, Charmander, or Bulbasaur, the young player protagonist is partnered with a Pikachu that prefers to spend its time outside of its Poké Ball. Partner in tow, and with a new, friendlier rival to compete with, the player begins his journey throughout Kanto to collect eight gym badges and challenge the Pokémon League. Along the way, they will find themselves fighting a crime syndicate called Team Rocket, bent on conquering the world.

The plot is, while marginally different, essentially beat-for-beat the same as the Game Boy classic. However, there are aspects that make this story stand out somewhat from Pokémon Yellow. A nice touch given to the story is that the characters have more personality to them. While not as developed as characters from other RPGs, the folk in Pokémon: Let’s Go, Pikachu! are still colorful and entertaining. Also, some characters like Blue, Jessie, and James are given something to do in the story like actively aiding or impeding the protagonist’s quest. This helps them feel like they have more of a purpose in the story rather than being fan-service. The story of Pokémon: Let’s Go, Pikachu! is not anything too complex, though it makes up for it in how it characterizes its cast. 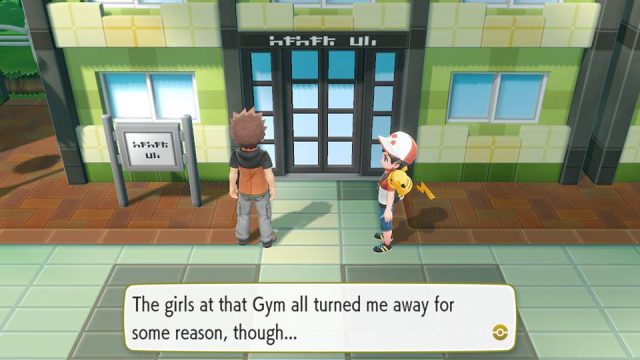 A nice little nod to Brock’s antics in the anime.

As far as presentation goes, Pokémon: Let’s Go, Pikachu! has a decent look to it. The graphics are cleaned up and have removed the black outlines that were in the Nintendo 3DS titles. Character and Pokémon models in the game appear nice and crisp along with the colorful environments. One minor issue is that the shadows within the game are noticeably pixelated. Although in many cases evidently trying to call back to the anime, the character designs also feel like a weakness. The art style comes off as almost too clean and safe, even for a Pokémon game. The soundtrack also disappoints. None of the individual tracks in the game stand out as anything special, just painfully average. That is really a shame too, as the Pokémon series is home to some amazing soundtracks, both mainline and spin-off titles. Still, the lackluster soundtrack does not create too large a damper on the game.

Additionally, there are a few features that truly add to the overall game. Pokémon follow players outside of their Poké Ball, with players even able to ride on their larger allies. It’s a nice little addition that adds to the overall charm of the title. A last feature to note is that Pokémon are now stored in their own pocket in the player’s bag, doing away with constantly traveling to Pokémon Centers to swap out creatures.

However, the real meat and potatoes of the game are the Pokémon battles and the new capturing system. Most Pokémon battles are now restricted to Trainer battles. Wild Pokémon battles are only found when fighting the Pokémon Articuno, Zapdos, Moltres, Mewtwo, and Snorlax. Battles can range from being fairly easy to moderately challenging throughout the game. Some battles will test a player’s strategy, but most of the time it boils down to picking the most effective attack to unleash against opponents. Due to the game returning to the first generation, the move pools for the available Pokémon have been downsized, limiting the experimentation and diverse move sets that the recent generations grant. With that in mind, players will be seeing the same attacks throughout the game without much variation. 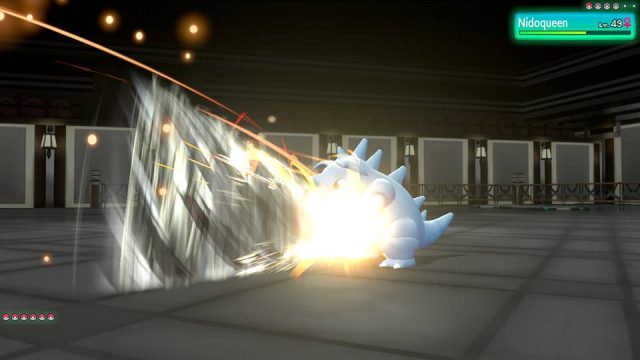 Another feature lost from later generations is the abilities system, and ultimately its removal just peels away another layer from Pokémon battles. Abilities in the older games added an interesting complexity to strategies and team building, which is now gone. Battles are nowhere near as visually pleasing as they could be either, as the Pokémon do not move outside of their idle or attack animations. As the series leaps onto the latest console generation, one can’t escape the feeling that an opportunity to really showcase the action of a Pokémon battle was wasted.

Trainer battles that stand out are the addition of the Master Trainers in the post-game. Master Trainers are all experts of using one specific Pokémon individually. While up front they may sound easy to beat, they are not. Even though a Master Trainer is restricted to a specific Pokémon, the player is also limited to using that same Pokémon. In addition, these Trainers have their Pokémon at higher levels with unconventional movesets. It will take more than brute force alone to overcome all 153 Master Trainers. 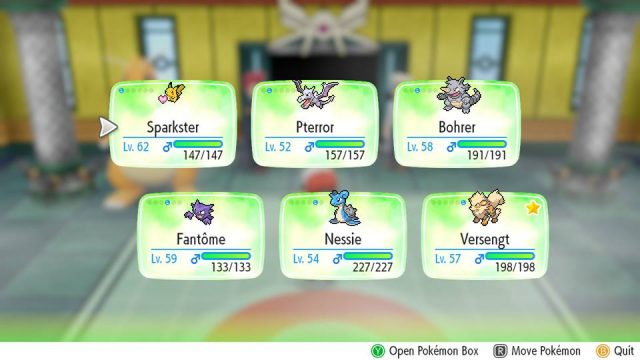 My end-game team. Yes, I do have a weird naming scheme.

While battles don’t particularly impress, the capture system surprisingly proves itself to be enjoyable. Taking a few notes from Pokémon GO, Pokémon: Let’s Go, Pikachu! implements a separate mode for catching Pokémon. Instead of a simple button press, players must utilize the motion controls of the Switch’s Joy-Con to throw a Poké Ball. A normal throw is performed by swinging the Joy-Con up or down. However, some Pokémon in the game will not let it be that easy. All Pokémon have the chance of deflecting a thrown ball, and others will move around to avoid attempted captures. When Pokémon veer off to the side, players have to swing the Joy-Con horizontally in the direction of the creature.

Poké Balls are not the only tools players have in their arsenal. Like in Pokémon GO, berries have a myriad of desirable effects on a wild Pokémon. The effects range from a higher chance of capture to calming restless Pokémon. There are also two things to note, the first being capture in handheld mode. Instead of swinging a Joy-Con, players will have to use the Switch’s gyroscopic controls to aim, while pressing the A button to throw a Poké Ball. The second thing to note is that party Pokémon still receive experience points after a successful capture. The capturing mechanic, while initially off-putting, is certainly enjoyable. Using a mix of berries and different approaches to capture adds a nice layer of strategy to catching Pokémon. The motion controls work fine too, though sometimes they can be aggravating to use. That is especially noticeable when it comes to wild Pokémon that will not sit still.

For what is supposed to be the next step forward for Pokémon, Pokémon: Let’s Go Pikachu! feels like it has taken a few steps back. While there are aspects of the game I do enjoy, there are also glaring issues that I cannot just ignore. Ultimately, Pokémon: Let’s Go, Pikachu! needlessly simplifies core mechanics in a series that does not require such streamlining.