Poison Control tries to be many things.  It tries to be a run-and-gun third-person shooter with a levelling system and unique cleaning mechanic.  It tries to be a serious undertaking into what turns a person’s mind poisonous and ultimately makes them feel alone.  How well developer Nippon Ichi Software accomplishes all these things is a mixed bag.  Movement is fluid enough, but gunning is marred by the occasional hit detection issue.  The story works well and is deeper than first expected, while cleaning mires with Poisonette is a bit of an acquired taste and can feel repetitive after a while.  The result is a combination of mediocre game mechanics with an intriguing multi-layered story and a strong soundtrack.

Poison Control begins with a protagonist pondering philosophically about where they are and how they got to what ends up being hell.  This protagonist can be male or female, but this is just a cosmetic choice and does not affect any story beats or gameplay.  Before they can get too familiar with their surroundings, a Klesha — a monstrous humanoid with an odd target-like face who attacks the living — appears and attacks them.  However, this Klesha is different to the others and players soon find themselves in a pact with Poisonette.  Poisonette has amnesia and the only thing she is certain of is wanting to go to heaven and needing the protagonist’s body to do so.  The protagonist agrees to this and Poisonette turns into a doll-sized character that can take over the protagonist’s body, leaving behind a skeleton in the process.  This deal officially designates them as soulmates, the pairing of a mortal stuck in hell and their bonded Klesha.  As soulmates, the player and Poisonette clear out Hells, personal poisonous mires of various teenaged females dealing with an emotional crisis (categorized as Belles), for the reward of stickers from Higan Radio.  When enough stickers are collected, they are traded in for a wish for one soulmate and entrance to heaven for the other.  Poisonette promises to go to heaven and let the protagonist wish to go back to the mortal realm. 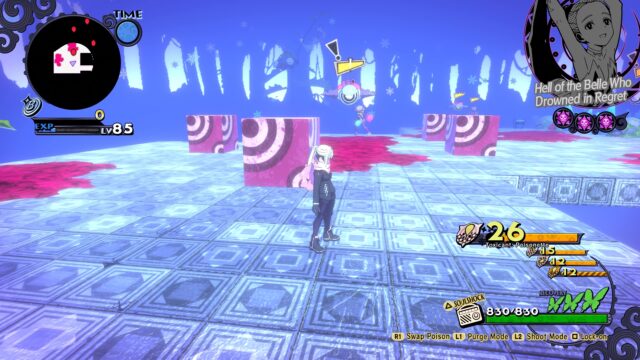 Poisonette’s character growth is one of the game’s greatest features as she goes from a one-note anime trope to a much more engaging personality.  Poisonette as a character is often a handful, but finds many ways to be endearing.  The protagonist only directly interacts with Poisonette and this helps the bond between the two of them grow.  Each Hell nurtures this bond, featuring a mini-story that delves into each Belles’ psyche in an interesting way, exploring self-doubts and emotional issues that can affect people’s lives.  A lot of these are of course embellished for effect, and some feel plucked straight out of an anime or soap opera.  The Belles all have Thoughtforms, memories of their pasts that have negatively affected them, and work like breadcrumbs that help Poisonette figure out what went wrong with the Belle to create this Hell.  Going through these Thoughtforms and interacting with protagonist afterwards help Poisonette understand humanity.  This style of storytelling is an acquired taste but the variety of the stories should provide some enjoyment for players.

Along the way, the duo comes across supporting characters in White Poisonette and the Girl in Mourning, who provide comic relief while also serving as interesting rivals.  Also lurking in the shadows is Black Poisonette, another character who is deeper than first expected.  Before each dungeon there’s a little background provided by Higan Radio and its two DJs Midori and Kikiri that read fan mail to give hints to the Belles’ issues.  This helps dole out the story in more manageable chunks, making it flow nicer, and is a welcome interjection.  Their generic names are a bit of a disservice to how interesting they turn out to be, but the layers of the story grow more engrossing as the game continues, and will stick with the player after the credits roll.

Story progression is done by entering a Belle’s Hell from the world map.  These are dungeons that vary in scale and visuals based on the Belles that created the Hells, but the colours in these dungeons are all the same, with bright pinks, yellows, purples, and dark blues making each dungeon feel too similar.  When the mission starts, the player has free movement around the map and a linear objective for that mission is laid out.  These missions range from cleaning the mires to finding various Thoughtforms throughout the stage.  Entering certain rooms causes exits to close off until they’re cleared of Kleshas.  Depending on placement these can be regular enemies or bosses.  Kleshas have a limited variety in look and function, and seeing the same enemy on-screen in multiple maps becomes expected.  This limited variety in goals and enemy designs results in a high degree of repetition. 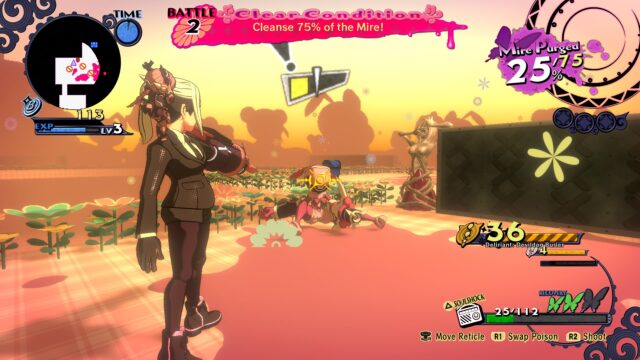 This Klesha is stunned, but not down for the count yet.

Combat is third-person, with a fixed camera angle behind the protagonist, and features a somewhat stiff cursor that moves around the screen to aim and shoot at enemies, with an optional lock-on feature available as well.  The game lets players equip up to four different weapons — three Belle weapons and a fourth Deviant weapon — and two armour slotstwo armour slots, with all equipment found inside the Hells.  Deviant weapons are collected from regular chests or enemy Kleshas, cannot be upgraded, and will swap automatically when a new one is found.  Weapons come in various forms of cutesy guns, like a pistol that looks like it shoots paint or a shotgun that shoots various balls of light.  Equipment customization is minimal, and pieces can only be upgraded up to four times using money.  The game’s clunky hit detection and aiming lead to many frustrating wastes of shots as the enemy takes no damage, while ammunition is largely irrelevant as Belle equipment will recharge when depleted.  This disjointed combat loop leaves a lot to be desired, but it occurs in short bursts and is quick to get through and continue the story

Combined with this repetitive gunplay is clearing the mires.  This is done by holding down a button to send out Poisonette.  Poisonette can run around in this mode, circling and clearing them in one swoop, but she is restricted to a time limit of around ten seconds.  This time limit means using Poisonette is precise and strategic during combat, or feels like colouring when just circling and clearing the mires at the player’s leisure.  Clearing mires also gives the character health boosts, extra continues, ammo, and money, so clearing should be done often even if not a part of the overall goal of that dungeon.  Swapping in and out of player mode and Poisonette mode can also be done to avoid enemy attacks.  A dodge roll button lets players try and avoid attacks, but the hit detection can be confusing, as damage will be taken when it looks as though it was avoided.  Overall, clearing mires can be fun in small doses but is entirely skippable unless collecting money for upgrades is needed. 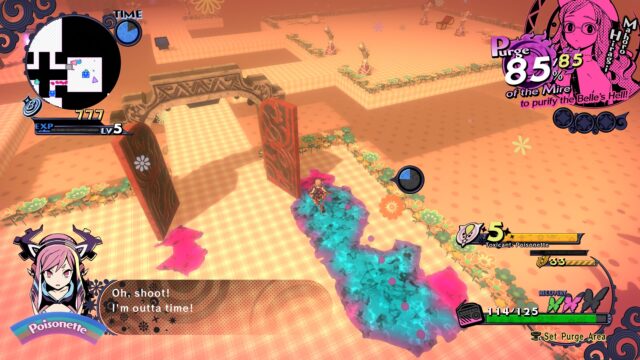 Poisonette trying her best to clear those mires.

Visually, Poison Control looks like the product of an initially impressive painter, who after a time is shown to have only one template, just depicted in different shades.  This fits a feeling of hell, overusing colourful patterns to such a point to make it feel like dull repetition, but to have each mini-story be unique only to have palette-swapped scenery painted by the same brush is a little disappointing.  Occasionally, an interesting visual piece gets added to the background or the layout of the dungeon will have some unique aspects to it, but this is easily lost in the repetitive colours and enemy types.  The game shines musically, with catchy tunes in combat and menus that are varied and fun to listen to.  Audio syncs amazingly well during serious and sad moments, with hard-hitting tracks that heighten the experience.  Overall, it’s a fantastic soundtrack, composed by an interconnected track listing that keeps the energy from the story continuing.  The music is joined by strong Japanese voice acting that is on point and matches the characters’ cadences splendidly.

Sometimes a game becomes a bit too ambitious for its own good.  Poison Control is one of these games, as the anime-inspired story and musical accompaniment are well worth being held in high regard.  Those can only take a game so far, however, and are brought down by the clunky gameplay and copy-and-paste visuals accompanying them.  Depending on which aspects the player values more it can either be a fun and engaging romp through a wonderful world with unique characters that grow, or it can feel like a slog repeating the same thing over and over ad nauseam until the energy drains out of the player and the game is shut off.  Ultimately it balances out to an average game with a few unique mechanics, an entertaining if niche story, and a stellar soundtrack.