The Ghost of Consoles Past

The latest release of a title that first arrived in North America in 2004, Phantom Brave: The Hermuda Triangle Remastered is a good-natured tale with some unique twists on turn-based strategy RPGs. The Nintendo Switch version, released as one of two games in the Prinny Presents NIS Classics Volume 1. However, the opportunity to fully remaster the game and include significant quality-of-life improvements is squandered in favor of a slapdash port that dilutes the appeal of both the game and the idea of the Prinny Presents series moving forward.

Phantom Brave takes place on a small group of islands called Wistaria in the world of Ivoire. Nestled here is Phantom Isle, a tiny island with one home and one living inhabitant – Marona, a thirteen-year-old adventurer-for-hire, known as a Chroma. Despite her solitude on the island, she is not alone due to her psychic power, which allows her to summon phantoms by channeling them through physical items. She is chiefly aided by Ash, the phantom of a Chroma who died on the Isle of Evil whilst hunting monsters with Marona’s parents. Marona’s father was able to use the last of his powers to preserve Ash as a phantom, requesting he watch over Marona. The pair work together completing jobs for hire while typically facing discrimination and/or nonpayment from clients when they find out Marona is in commune with ghosts. As a result, Marona struggles deeply with feelings of isolation and loneliness as she is unable to establish meaningful contact with other living beings, let alone friendships.

The game initially has players embark on a series of unrelated missions, emphasizing Marona’s naivete and loneliness. Through the course of the story, Marona slowly begins meeting and befriending other characters while Ash encounters Wraiths, the same type of monster which killed him years ago. Phantom Brave does a remarkable job balancing theme and tone given this is a game about an orphan psychic who can talk to dead people. Gamers will encounter saccharine platitudes of friendship overcoming adversity in large doses.  However, players will also grapple with surprisingly deep explorations of death, identity, camaraderie, and evil. The ability to juggle the stark contrast in tone is a testament to the strength of the world-building and characterization of Marona, Ash, and their friends. 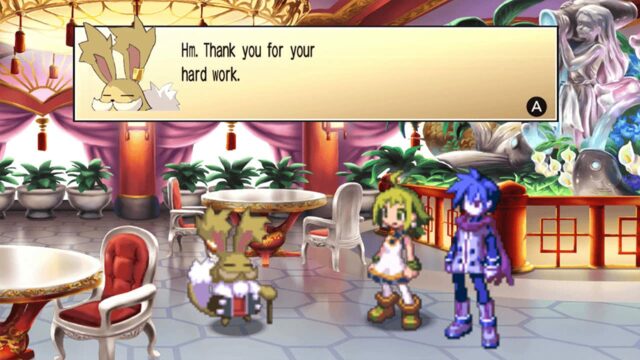 Phantom Brave quickly establishes a familiar gameplay rhythm, with players returning to Phantom Isle after each battle to heal, summon, and equip their units with new items or weapons. The story is structured into twenty different chapters, each featuring a handful of stages to complete and typically end with a boss battle.  Each chapter generally includes a self-contained job for Marona and Ash, with cutscenes peppered between battles, propelling each chapter — and the underlying narrative — forward.

The game presents numerous gameplay mechanics early on and allows the player to explore them as desired, with nearly limitless options for varied gameplay. It’s quite easy to feel overwhelmed at the initial deluge of battle mechanics as they pile up around the player with a surprisingly steep learning curve. In an early chapter, players will unlock a Fusionist, enabling items and characters to be fused for experience and abilities. Very quickly thereafter players recruit a character who can create Random Dungeons, which serve to level characters and obtain stronger items. Players are free to spend hundreds of hours exploring random dungeons, swapping out character titles, and fusing abilities or characters themselves, but they are also free to skip it almost entirely altogether and still engage with the narrative and deep combat systems to a comfortable level.

Fortunately, the many combat systems eventually gel together quite well. Battles are turn-based and take place on a gridless field. Marona is the main playable character, and each battle opens with Marona as the sole friendly unit on the field. Ash and all the phantoms have to be summoned through the Confine system, where Marona channels the unit’s spirit to manifest through rocks, bushes, trees, and more. Players need to pay attention, however, as the confining item affects the stats of the summoned phantom: for instance, summoning a phantom through a rock will increase defense, but reduce attack and speed. 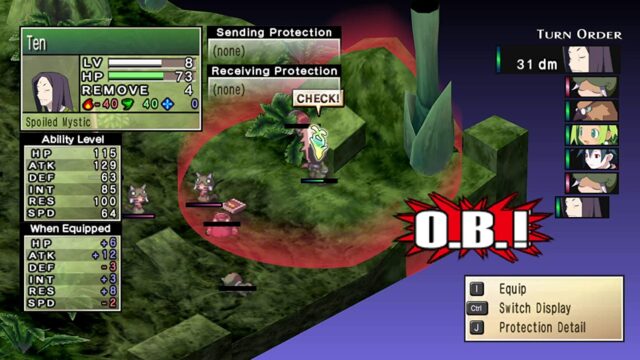 Units can stack, slide, and be thrown out of bounds.

While there is no limit to the number of phantoms allowed on the field at any time, there is one caveat: each phantom has a number of turns before they are removed from the item and rendered unusable for the remainder of battle. An eager player may frontload a fight with their toughest units, only to end up with a field of inanimate pebbles at the end of the battle. The Confine system is certainly novel, but feels unnecessary. Units are able to support each other by providing stat boosts and other buffs. Aside from assaulting other units, characters can pick up enemies and allies alike, throwing them onto other units or even out of bounds, so long as they are currently not equipped with a weapon. Units level up through battle by acquiring experience points, and also accrue mana which is used to learn or strengthen abilities. While character levels are important, one of the main ways to increase a unit’s strength is through equipping more powerful weapons. In this regard, the game delivers in spades with dozens of weapons ranging from mundane to hilarious.

Phantom Brave features a strong sense of aesthetic which is marred by questionable technical choices. The backgrounds are crisp and well-drawn, but clash with the muddled textures of the character sprites. Experiencing the washed-out textures of a main character against the sharp, crisply defined lines of a bookshelf in the corner of the screen is continually jarring. These graphical issues do not extend to the audio, with a serviceable soundtrack that captures the essence of the story with themes of hope, joy, and a tinge of sadness. Gamers have dual language options, with a hit-or-miss English voice cast led by the talented Sandy Fox as Marona. While the quality of the voice acting is inconsistent, the audio quality is remarkably stable given the age of these recordings. The soundtrack remains unchanged from prior editions, maintaining a pleasant yet ultimately unremarkable arrangement. 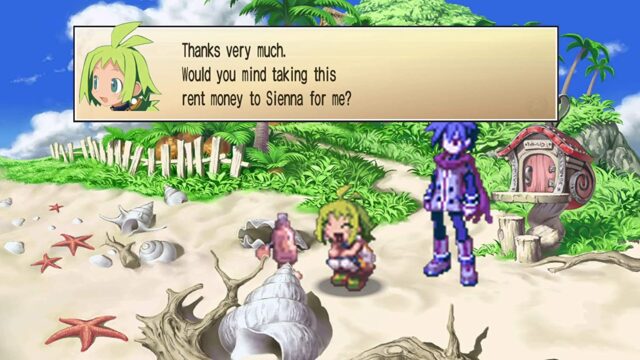 The background renderings are finely detailed.

In the past, ports of Phantom Brave included marginal improvements or additional content, including Another Marona, a four-chapter side story that provides little to no nuance or information to the overall story. Longtime fans of Phantom Brave coming back for another visit will be pleased to know these previous changes make their way into the remaster but very little else has gone into this iteration of the game. Phantom Brave earns merit for being willing to experiment both on and off the battlefield, even if some of that eagerness can lead the game astray. While the mechanics of the game are meant to be tinkered with or obliterated by players wiling to dive deep into the systems, the core game is still accessible if not a bit intimidating. Intrigued gamers should also consider Phantom Brave is nearly two decades old, and shows its age. Options to increase the speed of battle or streamline some of the extensive grinding required to proceed past difficulty spikes would have been welcome, as repeating maps to level units and weapons quickly becomes tiresome.

The story is surprisingly heartfelt even if it can be saccharine at times. However, it’s a major letdown that the opportunity to improve upon and create a definitive remaster wasn’t taken in lieu of what ultimately feels like a lazy port. This game is accessible on Steam and a handful of older consoles, so the idea of simply porting the game yet again without additional enhancements is especially disappointing. It’s not just that players deserve better, the moving journey and compelling relationship between Ash and Marona do, too.