Hail to the King

2018’s Monster Hunter: World brings a host of features and improvements to Capcom’s long-running series, representing the largest changes in some time. With countless quality of life improvements, upgraded visuals, vibrant ecosystems, and enhanced multiplayer, this entry seeks to open the world of hunting monsters to a new generation of gamers. However, veterans worried that the concessions made would dilute the core game experience they have come to know and love. While not without some faults, fans new and old can rest assured that this game does an excellent job walking that fine line between appealing to these two groups, creating an unforgettable, addictive experience.

Monster Hunter: World places you in the shoes of a hunter you create. Rather than fiddle with classes or statistics, players can choose how their character looks from a myriad of choices and sliders. The player not only creates their own human character, but also their Palico sidekick, a loyal anthropomorphic cat who rarely leaves the character’s side. The game wastes little time thrusting you into the story, discovering a new land alongside other Monster Hunters. As part of this guild, your team researches and investigates monsters which, oddly enough, often involves slaying the creatures. The story and dialogue carry the player through, however, they offer little in the way of true surprises, character development, or depth. Thankfully, Monster Hunter titles focus significantly more on the gameplay, and in this area Monster Hunter: World truly shines.

Players choose from over a dozen different weapon types and may switch at any time. The great sword and hammer take time to properly swing but hit like a ton of bricks. The quick twin blades allow players to quick dodge in and out while stabbing monsters in rapid succession. With the acrobatic insect glaive, hunters can pole-vault far into the air to mount larger creatures. The game ensures that players not only have a variety of weapons to pick from, but that each choice feels solid and viable. While weapons such as the charge blade prove much harder to master than more basic options like the sword and shield, given enough time and practice players can become deadly with any of the weapons to even the largest of beasts. Capcom leveraged its fourteen years of experience with the series to improve not only the balance, but the feel of each weapon. Each swing feels powerful, and well-placed hits have clear impact on the monster, providing an immense degree of satisfaction. 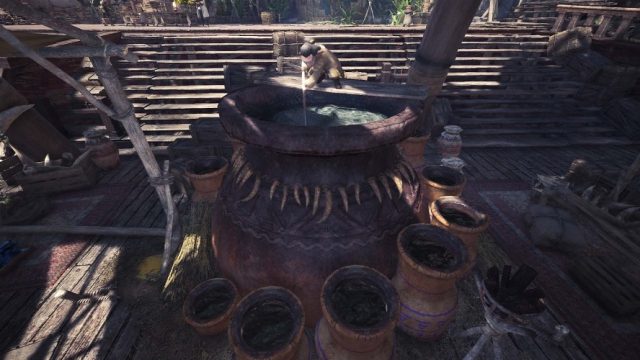 Mama is cookin’ up a whole lot of lovin’ before our next hunt!

Hunting any monster begins with tracking the beast down. Players search carefully for tracks, and have scoutflies to help point them out. These scoutflies act like a bloodhound. After they have discovered enough tracks, feathers, scales, etc., they catch the beast’s scent, and can lead the player straight to it. Along the way players will want to gather mushrooms, ores, honey, bugs, and more. With these items, found all over the land, wise adventurers create extremely useful items such as potions, traps, and bombs. In a tough scrap with a wyvern the size of a bus, every advantage matters. This process goes far in pulling the player into the role of hunting down a creature.

While tracking, players can take the time to observe the amount of attention and detail poured into creating the five areas players hunt in. These huge areas boast multiple levels, winding paths, and different ways to travel around them, making them feel several times larger than the segmented area maps of previous games. After a hundred hours of gameplay, players will continue to find hidden areas and surprises. A full ecosystem exists, with lush plants, insects, small animals, and strong predators of various sizes. This creates a food chain of sorts, and players will often stumble across one creature fighting another over territory, or even eating a smaller creature for dinner. As a hunter, the player is clearly the invader in a land that gets along just fine otherwise. These areas feel very organic and the complex paths created by forests, caverns, and streams keep the hunting grounds from getting stale even after dozens of hours of play.

Once the fight starts, another strength of the game shines. Monster Hunter: World features over two dozen different large monsters, each acting as a different boss battle of sorts. Hunters stand toe to toe with these beasts that attack the player with different approaches, abilities, strengths, and weaknesses. Monsters’ attack stances change during battle as they become enraged, exhausted, or significantly injured. This not only goes far in helping these fights feel dynamic, but pull the player further into the experience while provide ample opportunities to change strategies. 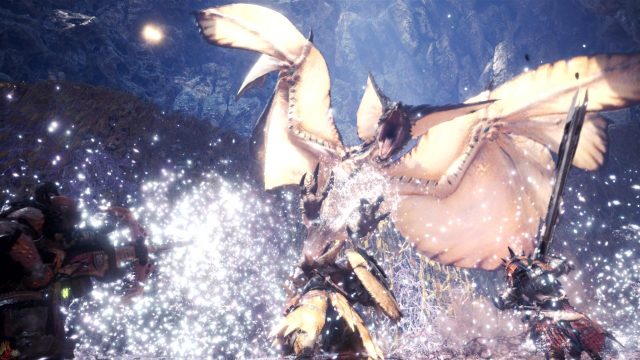 Just stay still and let me kill… er… study you!

Once the players defeat or capture a monster, they can take monster parts back to the blacksmith, who in turn creates improved weapons and armors. Of course, this strengthens the character to take on larger monsters with greater chances of survival. In fact, this is the only way, outside of temporary buffs, to improve the character’s statistics and acquire new skills. With parts from larger monsters, even better weapons and armor await the player. This loop is one of the hallmarks of the series, and feels like an improvement over previous iterations. Players can easily see where various choices will lead on the upgrade path, what they need to get the next step, and even roll back most decisions made. Players can even create a wishlist, allowing them to keep easy tabs on their next upgrade.

Monster Hunter: World allows for a variety of ways to play the game. Aside from story mode, players can explore any of the previously uncovered lands in expedition mode. Without time limits, death counters, or mission conditions, hunters can use exploration mode to freely search for resources, hunt various creatures big and small, and uncover clues for future missions such as investigation quests. These quests have strict conditions, such as hunting two specific monsters within thirty minutes, but offer greater rewards than typical missions. Optional quests often introduce players to new monsters glazed over in the story missions, while some also unlock items such as food ingredients and new accessories. The arena offers a different challenge, with an enclosed space offering little room for retreat, but with various large weapons players can use help wear down their opponents. Challenge missions force the players out of their comfort zones by asking them to take down monsters within set times using one of five selected weapon and armor loadouts. This variety gives the game further longevity, which helps as players finish the main story and head into the end-game. There, deeper sub-systems and upgrade paths await so that players always have goals to reach in their quest to become the ultimate hunter of monsters.

Graphics and sound completely pull their weight. Not only is the world well designed, but the detail of textures and camera effects draw the eye and give players reason to pause and consider their surroundings. Much time and effort has been put into the monsters. They not only look perfect for the part, but also move with the fluidity one would expect from these vicious beasts. Outfits for both hunters and palicos show that a ton of creativity and thought went into the vast majority of them, with only a small minority feeling uninspired. Sound design also shines as players can often be alerted by what they hear long before they see it. A good set of gaming headphones accentuates this experience and helps players to know what direction an unseen attack is coming from. Sweeping scores help to entertain and delight the player as well, with faster music helping to accentuate larger fights without detracting from the fight. 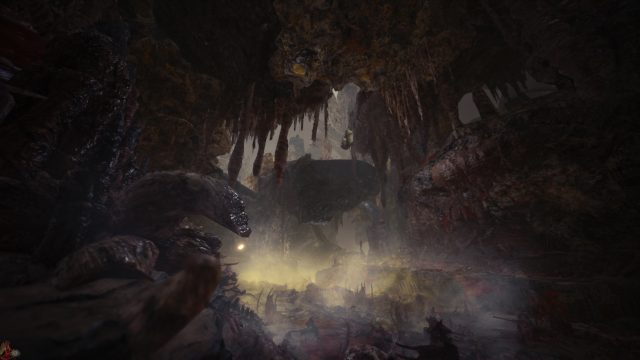 Areas are large, well thought out, and very detailed.

One of the main draws of the Monster Hunter series, multiplayer, has also received some polish from previous iterations, but could still use some work. Getting together with friends to take down beasts proves easier on the PlayStation 4 than, say, the Nintendo 3DS. Monster Hunter: World makes taking down huge wyverns together challenging, yet extremely satisfying. Working out a strategy together to tackle an elder dragon, and watching it pay off once successfully executed, provides some of the best player vs. environment experiences and memories of any game to date.

However, several challenges and confusing design decisions can frustrate these groups. For example, friends cannot join someone playing a story mission, until he or she clears the cutscenes, which usually requires going through the first quarter of the mission that leads to the actual monster encounter itself first. The game never explains this well, and other titles of the current generation do not run into this challenge. The guild system also has several idiosyncrasies such as larger guilds being split into separate rooms when the number of online members exceed sixteen. These oddities would have a smaller impact if properly explained, but often they are not.

However, veteran hunters of the series will say that the games have never explained themselves well. In the absence of decent in-game tutorials and help files, the gaming community created websites and video channels dedicated solely to properly detailing the deep mechanics and interactions of Monster Hunter‘s various systems. While Monster Hunter: World does a better job than previous games of the series in explaining these, it still leaves players in the dark about some things. Certainly some players find enjoyment in discovering a particular combo for their weapon that works well. However, basic game mechanics, especially those that work differently from other modern games for apparently arbitrary reasons, really could use better clarification.

Despite these shortcomings, Monster Hunter: World absolutely stands out as an astonishing, deep, compelling hunting experience that can keep most gamers entertained for dozens, if not hundreds, of hours. The aforementioned loop of “hunt, upgrade, repeat,” works here better than ever before. Capcom has fine-tuned this series for over a decade, and their hard work pays off with this release. Some may have worried that with the recent release of Monster Hunter clones that others may have discovered ways to improve on this formula and take over the genre. Yet, Monster Hunter: World proves that Capcom is still king of this jungle. Long live the king!