The fact that some staff members who were involved in the development of Monark had worked on the original Shin Megami Tensei was part of Monark’s cover letter. While this helped get the game on many players’ radars, it also instantly drew comparisons between the two and some dismissals as a shameless imitation. Monark, however, has a peculiar way of executing some ideas that sets it apart from its obvious source of inspiration. The battle system is notable, and the art is mostly solid, but its positives are countered by a repetitive and slow second half.

Players take on the role of an amnesiac student at Shin Mikado Academy. This academy has been shrouded by mist that induces madness in those who are exposed to it for a long time, with a barrier preventing anyone from going out. Joining with a group of students and faculty in a newly-formed True Student Council, players begin their mission to shatter the ideals of the Pactbearers, humans who have gained superhuman powers through daemonic pacts and are believed to be responsible for generating the mist and the barrier. Like the Pactbearers, the protagonist is also able to access an alternate world called the Otherworld. The player is elected vice president of the True Student Council and tasked with recruiting potential allies while defeating enemies. Four fighting companions whose interests align soon join up, with others like the school doctor offering support.

The game is divided into two chapters, each including different acts led by each of the companions. As the game progresses, the story proves to be a little more complex than simply defeating Pactbearers. The main characters are deeply developed and have peculiar ways of thinking, with many being intriguing since they seem to be allies and enemies at the same time. The writing manages to get players interested in figuring out who is really pulling the strings during the course of the game, including welcome plot twists, and the mysterious mood is well preserved throughout the whole game. The first chapter has good pacing and allows players to understand the motivations of the main cast, making the story enjoyable and the characters engaging. However, without wishing to spoil too much, the second chapter very much slows the game down and features some significant repetition. It certainly doesn’t help retain interest in the gameplay, and even when it does have narrative reasons, it could have been designed in a more efficient way to prevent players from replaying some dungeons. Fortunately, the conclusion of the story after the second chapter is satisfying and the loose ends are tied up nicely. 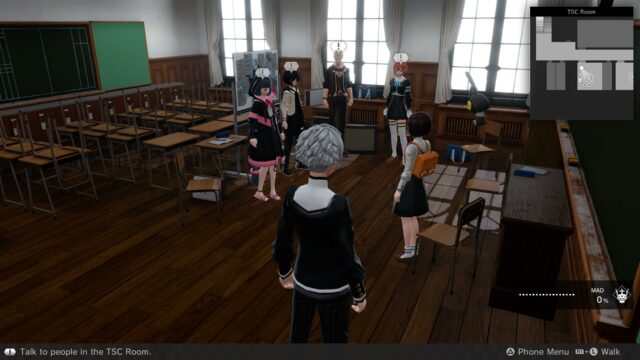 Members of the True Student Council are peculiar and diverse.

For much of the game, players explore different parts of the academy while meeting other students and Pactbearers. Certain bits of information, such as locker combinations, are needed to advance and access different parts of the academy. There are notes that are automatically saved in the player’s journal that may contain the solutions for future puzzles, making most of the recorded information important and the clues easy to recall. In general, puzzles require some reflection but are otherwise easy to deduce, but there are a couple that can be tough to crack and may frustrate less patient players. In the end, there is a sense of fulfillment when getting a correct answer or a code, even on the easy puzzles.

Players take psychological tests to improve the protagonist’s Ego stats, seven attributes represented by the deadly sins. Raising these stats has two main purposes: letting players equip certain items and resonating with other students’ Alter Egos. Resonating is done by finding Alter Ego fragments linked to NPCs that are scattered around the academy, with the profile section giving hints of their locations. Resonating with these fragments permanently boosts combat attributes such as attack, defense, or HP, provided players have reached the appropriate requirement, such as 500 points in Pride. Besides tests, Ego stats can be increased by defeating enemies in the Otherworld. The inclusion of Ego stats for the player character is welcome, and psychological tests provide an interesting take on character growth, with the game offering explanations for why each answer increases a particular attribute.

Unlike the school, players are not able to explore the Otherworld, which ultimately serves as a battlefield. Battles are initiated by calling a particular phone contact when in range of the stuffed-animal daemon Vanitas, with each one having an objective such as killing all enemies or destroying a core. Most have randomly selected elements, including the number and placement of enemies as well as objects that can heal or cause certain ailments, helping to alleviate repetition as players can phone contacts as many times as they want to level up their party. 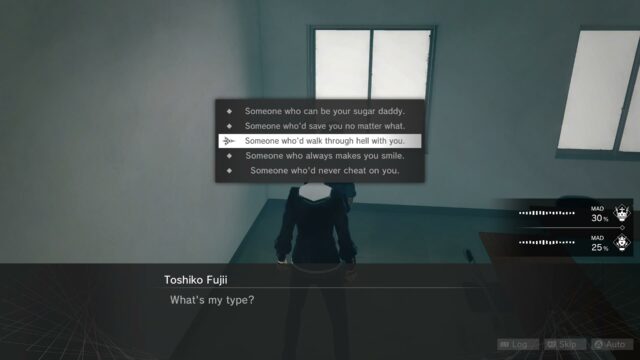 Players have to pay attention to details in order to advance.

The turn-based battle system is one of Monark’s strongest features. Players have human and non-human allies, each with a vast set of abilities. There is no grid, but movement decisions are important as each character has limited movement distance, while characters within range can assist attacks and back attacks deal more damage, with the same applying to enemies. Positioning units in range to assist and attack, but with the precaution of not leaving them open for an ambush, is an interesting take on the strategy element.

Players have four possible actions: using an ability or authority, using an item, deferring to another member, and waiting. Waiting lets the character recover a little HP, while deferring lets a character that has previously acted that round go again at the cost of raising their madness meter. Both abilities and authorities can be understood as skills, but the difference is that the ones labeled as abilities are mostly offensive, including basic attacks or powerful ones that cost HP, while authorities are a larger mixture of buffing, healing, and offensive skills and raise a character’s madness when used. Raising madness can be risky as when it reaches 100% the character starts attacking their allies before being knocked out a few turns later. In addition to a madness meter, human party members have an awakening meter that rises when attacked or by using their special Resolve ability. When the awakening meter fills, it generates a special aura while providing a stat boost and access to a unique ability for a few turns. Although madness is mostly a danger, it can be used to the player’s advantage as maximizing both madness and awakening at the same time grants the special high-powered Enlightened state. It’s difficult to reach — done by utilizing the protagonist’s unique authority to resonate with allies and enemies — but is highly satisfying when achieved and is a great table turner even when facing bosses. The role of madness during battles is innovative and forces players to have serious consideration over certain actions. In addition, buffs and ailments have a clear impact and can be used wisely to get the upper hand.

Instead of an ever-increasing party of human allies, fighting companions are replaced for each act. Additional party members come in the form of Fiends, skeletal fighters who join after players have completed certain events. Vessels can be equipped onto Fiends to boost their power or grant them new abilities, while both humans and Fiends have their own skill trees that use Spirit Points obtained from battling and unlocking some achievements. As battles allow players to select more units, they become more strategic since attacking — or being attacked — with five units assisting the action can become lethal. Since losing some battles is common, the game offers and an option to retry, and if players decide not to do so, game over isn’t terrible since they are simply taken to the infirmary. However, beating enemies that are significantly stronger by exploiting the abilities of all units is highly satisfying. Since combat is tough, there is a Casual Mode for those who want to receive less damage, yet this mode lowers the odds of getting spoils after the battle. The turn-based battle system never gets boring, and boss fights take it a step further since they are even more challenging and engaging. 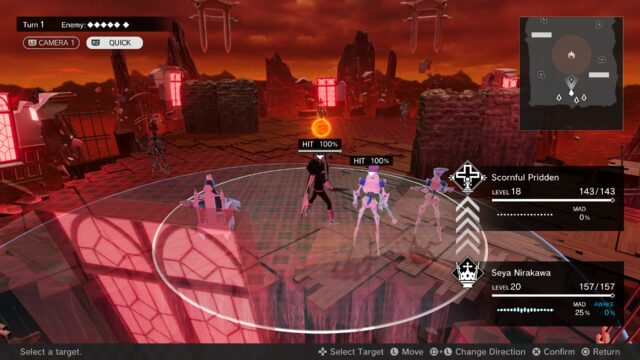 Visuals include places filled with Mist that partially limit the vision of players and a constant use of red eyes symbolizing madness. They are pretty good but not very diverse: enemies, the Otherworld, and the academy look very similar most of the time. Character models look unrefined at times, but Monark has a characteristic style that makes its overall graphics pleasing as well as a perfect match for its mysterious mood. Visually, bosses and the animations of special abilities are the stars of the show. The soundscape is enjoyable throughout the whole game. It includes a considerable number of tracks that never overstay their welcome: jazzy tunes accompany the exploration most of the time, normal battles have strings and distorted guitars in the background, and boss battles are highlighted by hard-rock tracks with excellent female vocals. English voice acting is convincing, and the sound effects work perfectly with the music and the mood of the game.

Monark is an unrefined gem, but it is definitely a game worth checking out. While it certainly has some similar ideas as other properties, it pulls out enough tricks to make it different and individually inviting. Despite some issues, it’s a good first attempt with plenty of room for polish in any subsequent follow-up.