Acquire and ZeroDiv’s Vita RPG, Mind Zero, took a bit of early flak from the many who labelled it a Persona-clone based on incomplete information. As a few story aspects are eerily similar, the game deserves some of the blame for this, but a Persona-clone it is most definitely not. Mind Zero is certainly its own thing, bringing interesting ideas to its turn-based combat, but joined for the ride by a few odd design choices and not the cleanest execution.

Similarities to Persona undeniably exist in the premise, which posits a parallel world inhabited by mysterious creatures called MINDs that occasionally break through to the familiar world and possess humans. The player’s party of primarily high-schoolers find themselves creating a contract with particular MINDs and investigating MIND-related incidents, with a couple of detectives that frequently stumble across the plot rounding off the general scenario. However, these similarities end here, with the stories taking wildly different approaches straight away. Mind Zero‘s tale is pretty compact and very clearly intended to not stand alone, which results in an unsatisfying cliffhanger for a conclusion that fails to answer many questions. In general though, the story does a decent job and the prospect of the story being continued is not at all unwelcome. The main antagonist and his allies are all very flat, with perhaps one exception, with poorly established motivations. Things are a bit similar with the main cast, who lack any significant character development, but they are at least a likable and engaging bunch. It’s a passable story that keeps enough interest past the end, but players who go out of the way to experience it are unlikely to applaud.

Mind Zero‘s structure is first and foremost devoted to dungeon crawling. Each of the game’s story phases concludes with the completion of that phase’s dungeon. Dungeons are traversed in a first-person view with random encounters frequently interrupting exploration. Players can exit the dungeon using one of the two or three portals found at various points in the excursion. There are sometimes a few locked passages that must be opened, but these are simply solved by finding the appropriate switch elsewhere and undertaking an appropriate token action on the Vita touchscreen. 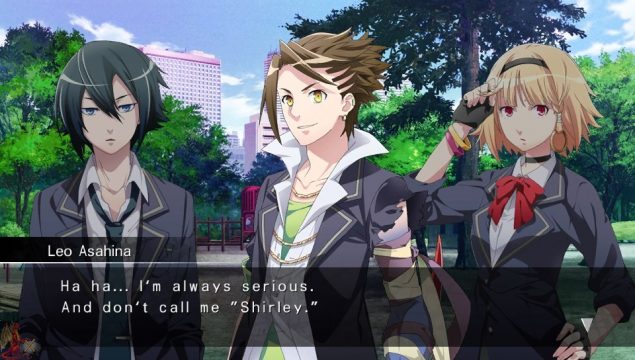 Combat finds each member of the party member trio granted three different gauges to use. The top is a TP gauge that steadily rises on its own volition, and is used by the various skills, as well as to grant a brief “burst” mode, which gives a character a free action to use straight away before the next turn begins. The middle bar is the character’s LP or health, and works as tradition would indicate, but is also used by any skills that act upon opponents in addition to the TP cost. However, a character’s LP cannot be affected by opponent attacks if the MIND is active. Players can choose whether to deactivate a character’s MIND for a turn to regain some MP, but this leaves LP vulnerable. The third gauge, for MP, is used by the MIND, and if it is knocked to zero by an attack then the character is unable to act for a turn. MP is fully restored after each battle but LP and TP are not.

Players will find that support magic, particularly that which boosts defence, is very useful. Patience is often necessary and many enemies can hit very hard if the player is unprepared. Every now and then, players will find a free turn granted to one side in battle for no readily apparent reason, which is not pleasant if the enemy is the beneficiary. This curious inclusion’s rareness doesn’t alleviate the possibility of an unlucky party being immediately wiped out. Bosses provide decent challenges, although the health totals are such that they often become little more than a war of attrition once the proper tactics have been realised. Despite a few odd decisions and some balancing issues, the battle system actually works very well, with the tactical decisions about MIND and burst usage doing an excellent job of differentiating Mind Zero from other turn-based systems out there.

No dungeon is randomly generated, and they usually feature around ten winding floors to explore. However, they more often than not start to outlive their welcome by the midway point, something contributed to by a higher than necessary random encounter rate. The game does have adjustable difficulty (as well as the option to save anywhere), and many players will probably take advantage of this fact to reduce the amount of time random encounters will suck up. There are also a few hefty difficulty jumps towards the middle portion of the game, which may also encourage a difficulty turn-down, but things at least return to a more reasonable slope for the latter portions. Battle animations can at least be sped up by holding down the right shoulder button, and the game includes an auto-battle option, although even on the easiest difficulty using it can be a big risk. It is possible to escape random battles, although attempting to use the escape option without first being in Burst mode is just asking for the prompt to reload the previous save.

After a short amount of time, the player’s group opens up to six members to choose from. However, the small amount of experience passed on to non-active members and seemingly negligible amount of variation between the characters ability-wise makes rotating the party a less than attractive proposition. Character customisation comes in the form of equipment, although this is fairly bog-standard, as well as by equipping the skills available for that character in battle. There’s a pretty hefty number of skill cards to equip in offensive, support, healing, and passive forms, with an additional skill slot being unlocked every few levels, up to an end-game maximum of eight. After a few chapters, an NPC allows skill cards to be levelled up by merging them with spare cards or upgraded to more powerful ones if players have picked up the required items from the dungeons. 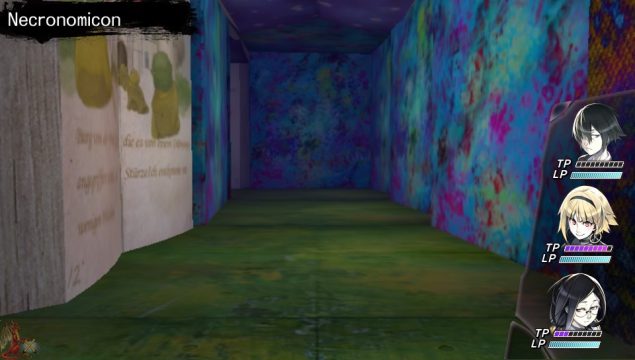 Interacting with Mind Zero outside of battle isn’t as responsive as might be hoped. Going in and out of dungeons or changing party characters is met with quite lengthy loading screens, and the menu UI is unnecessarily clunky. A decent amount of side-quests help give additional background to some of the party characters along with more tangible rewards, as well as providing a reason to further explore previously completed dungeons. Mind Zero will take most between twenty-five to thirty hours to get through, potentially longer if players find themselves engaged by the battle system and wanting to keep at it through the higher difficulties.

Mind Zero‘s music, by ZIZZ Studio, is decent and catchy, featuring a pretty eclectic mix of tracks. The game is fully voiced, and the English voicework is passable but not outstanding in any way. Players have the option to select between English and Japanese voice-overs whenever loading a save game, offering variety in the vocal performances. Visually the game is a bit below par. Animations and enemy designs aren’t very interesting, with the latter featuring plenty of palette-swaps. Dungeons are decently atmospheric in their designs, but again nowhere near the most interesting and lacking much interior variation, although most at least offer a second tile set. Conversations just use the standard visual-novel collection of portraits conveying a selection of emotions, and key events are limited to one special image if lucky, or just shocked portraits and voice acting if not.

Mind Zero is a decent start. There’s a lot of neat ideas floating around, but each of them can be countered with an area the game could do better. It’s the beginning of a potential series worth exploring further, but there is still plenty of work to be done to generate a property that deserves mention alongside the titles uninformed viewers have compared it to. 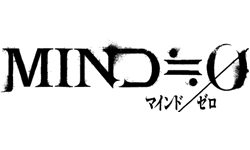