2022’s Mario + Rabbids: Sparks of Hope is the follow-up to 2017’s Mario + Rabbids: Kingdom Battle. While the game picks up shortly after the final events of the previous title, Ubisoft has put a lot of work into making this second outing another unique experience for players.

The story of Mario + Rabbids: Sparks of Hope revolves around Mario, Peach, Luigi, and their Rabbid counterparts scouring the universe to rescue the titular Sparks from the clutches of the dark, intergalactic threat known as Cursa. Sparks are the Rabbid forms of Super Mario Galaxy’s Lumas, which are unfathomable sources of energy. Keeping the Sparks out of Cursa’s clutches is the only way to ensure the survival of the galaxy.

Even though this brief overview may sound like the start of something super epic in scale, the story does not have a lot of twists and turns along the way to its inevitable end. While there are a few surprises here and there, players will mostly be able to guess what is coming at any given moment. This is not necessarily a negative, though, as the general vibe of Sparks of Hope is a far more laid-back RPG affair. From the game’s opening, which finds the heroes relaxing and goofing off, to ten hours in where the group is helping a DJ in finding their missing albums to get the party started, Sparks of Hope never takes itself seriously. This lack of gravitas coupled with well-directed humor from the cast of characters will manage to bring a smile to even the most cynical player’s face. 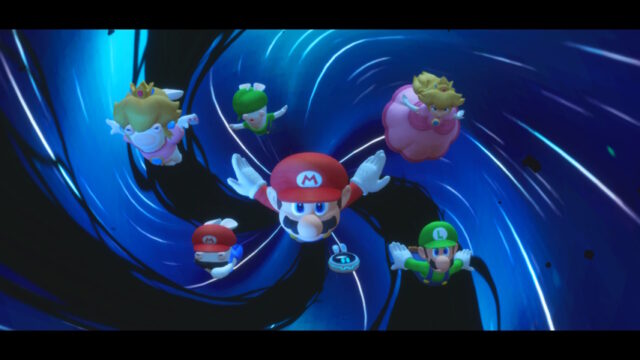 Mario, Luigi, and the rest of the heroes fly off on another adventure.

This approach extends beyond just the surface, as players can adjust the game depending on their current desires. Those wanting a more difficult affair can flip to hard mode, while those wanting to keep it casual can change the difficulty to easy. However, the game gives even deeper options such as allowing players to turn off auto healing after battles, making recovery between bouts more necessary, or even turning on full invulnerability to just experience the story without struggling through combat. Both design choices make for an effortless way for players to tailor the game to suit their desired experience.

Outside of the story and laid-back approach to the game’s design lies the core gameplay component: combat. Players who are familiar with the original will find some surprises here. Unlike the XCOM-like combat that Kingdom Battle flourished under, where characters engaged enemies with grid-based movement, family-friendly firearms, and cover systems, Sparks of Hope has a more Valkyria Chronicles approach. This new approach allows each character to freely move a certain range during their turn. This range can be used up before or after taking any actions, making it easy to move, take an action, move back, and take another one before ending each turn. The core of combat is super simple, but the game incorporates so many mechanics throughout its runtime that battles become more strategic affairs than those of its predecessor. 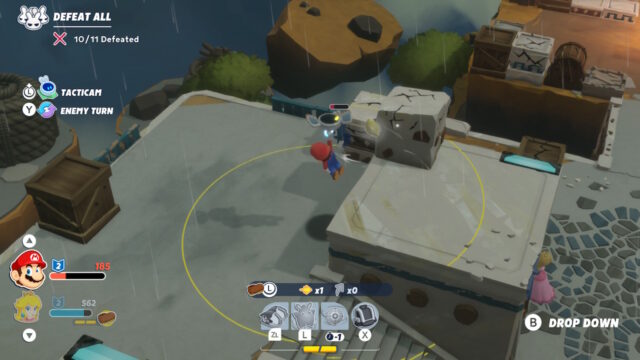 The team jump mechanic allows team members to jump off of each other to reach new heights.

This increased level of strategy is mostly due to the wide range of skills characters can unlock, movement options, and the titular Sparks. While skills are self-explanatory —characters level up and can spend points for upgrades to their actions— movement is really the star of the show. By using the team jump skill, for example, players can reach higher elevations, stomp enemies, or even shoot from midair when using Mario. Add sliding into the mix and players can outmaneuver enemies on the very first turn.

Sparks on the other hand can be equipped by characters and provide both passive and active bonuses. Throughout the adventure, the party will get new Sparks, with unique abilities such as being able to rain fire down on enemies, boost nearby party members’ defenses, and even summon a giant Rabbid who wields a thwomp as a weapon. There is a lot more to combat and its mechanics, but the overall takeaway is a solid system that feels great to use. Even on higher difficulties, combat never feels too unfair as enemies have the same limitations as the player. Victory often comes down to how effectively the player uses the tools at their disposal rather than luck, which makes each battle that much more satisfying.

The cast of characters this time around is also an excellent choice of Mario regulars, with fan favorites such as Bowser finally joining the party. Each character, although aesthetically simple in design, is expressive, chock-full of nice animations, and remains true to their archetype. The only gripe with the character choices, though, is the inclusion of spoken dialogue. One of the biggest charms of the Rabbids has always been their unintelligible speech. A lot of the humor found in earlier titles came from the player’s lack of understanding of what the character was saying while their cartoony, over-the-top actions conveyed the meaning perfectly. Unfortunately, the Rabbids this time around have something to say after every single one of their actions. This quickly wears out its welcome. 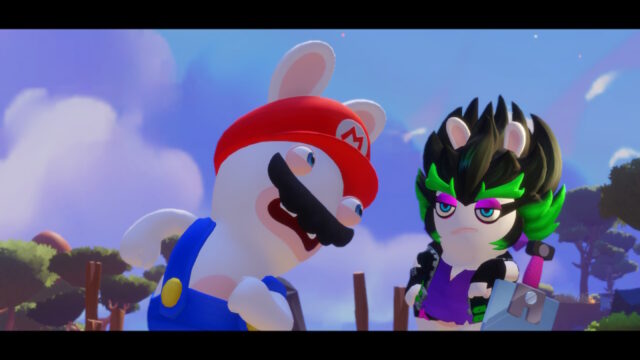 What compounds the spoken dialogue issue is, while the Rabbids are far more talkative this time around, none of the Mushroom Kingdom crew has been made nearly as chatty as the Rabbids. Mario in particular grunts and okays as usual but is so well animated that the message comes across very easily. The game did not benefit by having the Rabbids now start to speak actual words while before they exuded more personality without verbal understanding. It’s a questionable design choice that’s hard to justify.

While the voiced audio is not a welcome addition, the large variety of musical tracks certainly is. Nintendo is known for its focus on excellent video game soundtracks, and Ubisoft embraced this prestige in every track. The musical choices range from laid-back ocean jams to spooky violin and percussion hymns, and even some intergalactic-level fully orchestrated pieces that could give John Williams a run for his money. Each world the party visits, including the final showdown, has tracks that will get players moving in their seats and amped up for the battle before them. 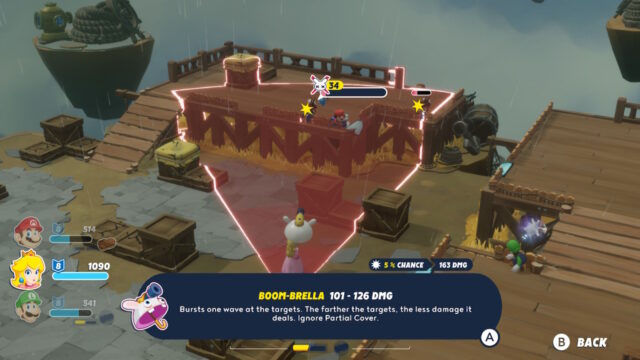 Combat provides plenty of feedback to players, allowing for strategic choices in battle.

The worlds themselves may also need to be counted as characters as there is just so much life and things to do outside of the excellent tactical combat. Each world the heroes visit has its own theme such as a frozen wasteland or a sunny beach resort. While players can rush through the story without touching any side content, there is plenty to collect and complete in each world to keep completionists occupied. In addition to optional battles, there are coin collection challenges, secret areas to find, zany citizens who need help, and loads more. Each side activity rewards players with a planet coin that can be exchanged for helpful battle items, weapon cosmetics, and keys that unlock sealed areas on the planet.

Overall, Mario + Rabbids: Sparks of Hope does a fantastic job building on the original’s success while retaining its laid-back and humorous approach to RPGs. Smart design choices bolster the game in terms of accessibility, graphical presentation, and characterization. Outside of a few flaws, fans of strategic turn-based RPGs or just Mario games, in general, will find a lot to love here.

Andron joined RPGamer as a volunteer reviewer in 2022 and is an aspiring novelist. His favorite RPG of all time is Grandia II and he'll duel anyone to get it remade (or at least finally get a fourth installment to the franchise).