Creating a spin-off series for a beloved franchise can be a difficult task. There are a lot of expectations on the developer to create something unique that still feels like the core franchise. Judgment was a surprise for a lot of gamers when it was released in 2019 because it was clear that, while it followed a new protagonist, it was still the same Kamurocho we had grown to love in Yakuza. Lost Judgment is the next game in the Judgment spin-off series, and while it’s a more ambitious experience for players, it’s tough to say whether that is for the better.

In December of 2021, a man named Akihiro Ehara is accused of sexual harassment on a train. Three days after the accusation, a decomposing body is discovered in an abandoned building in Yokohama’s Izesaki Ijincho district. Lawyer Saori Shirosaki of Genda Law is tasked with defending Ehara in court, and after Ehara is given a guilty verdict, he announces to the courts that the body in Ijincho is that of the high school bully who drove his son to suicide. Saori calls upon her friend and former colleague, Takayuki Yagami, to help investigate Ehara’s potential involvement regarding the deceased bully. As Yagami digs deeper into the case, a mysterious handyman appears in Ijincho, and a group known as “RK” begins to make the rounds in Kamurocho, looking for the body of a man who disappeared years ago.

As in any detective story, Lost Judgment takes players on a crazy ride through a case that seems simple on paper but ends up with more complicating factors than meet the eye. There is a huge focus on issues surrounding bullying in high schools across Japan, teen suicide rates, and the frequent lack of proof in such bullying cases should they go to court. Many of the characters in Lost Judgment have little faith in Japan’s legal system, with its 99% conviction rate.

Themes of whether or not to uphold the law or enact vengeance play an important role during the story. Yagami spends a lot of the game questioning what justice actually means, and whether the law is worth upholding if it’s constantly failing those who need it the most. These themes are fantastically laid out throughout the narrative, as players will find themselves questioning character behavior and motivations. The story beats compel the player to explore and put all the pieces together. It is also presented with a lot of empathy towards all subjects involved, as many of the characters have chosen to take the law into their own hands because they feel the legal system has failed them. 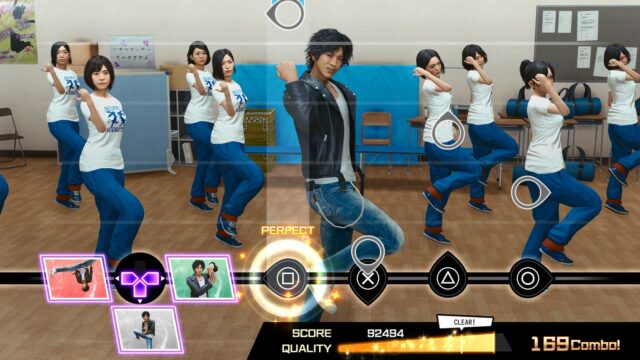 Yagami’s got the moves and the groove.

While the story is mostly worth praising, how it handles sexual assault is problematic throughout, reinforcing the horrible stereotype that women are not worth believing when they state that they have been assaulted. A lot of the women in Lost Judgment often are not given proper closure in their storylines, if they even get that far. Even during the high school sections, some of the female characters are bullied and sexually harassed, and those instances are wrapped up too nicely to be believable. Lost Judgment truly had an opportunity to use these themes in such a way as to be on the side of abuse survivors, but instead perpetuates stereotypes that women can’t empower themselves in these types of situations.

There are plenty of new gameplay changes in Lost Judgment, though most of them offer mixed results. For starters, Side Cases are found by eavesdropping on random passerby conversations and opening the Chatter app on Yagami’s phone, getting a keyword to search, and then find out what’s going on. Honestly, this change is pretty terrible. On one hand, it feels more investigative in that Yagami has the ability to snoop for information based on conversations, but on the other, he has to stand and wait around, and not every chat bubble will give the player a keyword. It’s also easy to forget that the Chatter App exists because it’s not very intuitive. Players are running from chatter point to chatter point and often most of the gossip isn’t even interesting, which just makes Side Cases feel more like busywork than a part of the overall experience.

The new School Stories where Yagami helps Kyoko Amazawa, the head of the Mystery Research Club, provides a much more interesting deviation from the main plot. She wants to be a detective, and many of the situations that she places Yagami in are both light-hearted and fairly entertaining. There is great storytelling, awkward but funny dance mini-games, and just a fun romp when the player needs a break from the main story.

Other new gameplay elements include parkour and stealth segments where Yagami must avoid being caught in situations, and these are poorly telegraphed throughout the game. It’s clear these are intended to add more skills into Yagami’s detective repertoire, but it’s also clear that Ryu Ga Gotoku Studio doesn’t have a lot of experience making stealth and parkour work. The stealth sections require that players work through a small area without getting caught. Yagami has exactly two tools in his arsenal: tossing a coin for distraction, or dropping a smoke bomb and using a sleeper hold on the enemy. These sections lack tension and feel clumsy, and never add anything of value other than more work for the player. 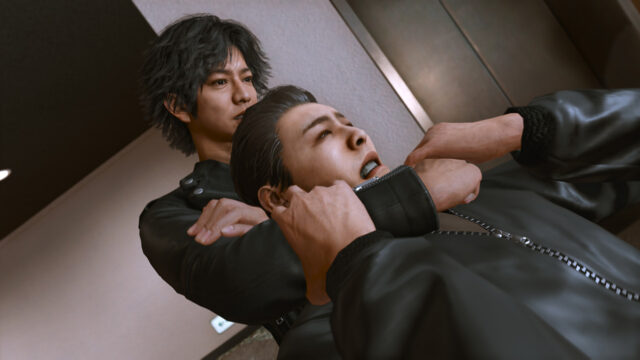 The parkour falls flat. It’s not always easy to know where the markers are and where to move. There are also timed button presses that sometimes don’t work. On top of that, Yagami has a timer over his head and if he doesn’t move quickly enough, he’ll fall and the player has to start the section over again. The amount of investigating that also happens during parkour feels like an added layer that wasn’t well thought out, and it kills the pacing in these instances.  There is no freedom of movement in these sections as they are too linear. The developers would have benefited from learning from other franchises that specialize in these gameplay elements and making them their own. As it stands, these sections are outright boring.

Yagami has new gadgets that will help him in his investigations, such as a noise amplifier, detector, and a crime-solving Shiba. The game tries to shoehorn a lot of these gadgets into the story and side-content, which at times can border on frustrating. The detector allows Yagami to listen for a beeping noise that will indicate that an item is nearby, and the sound is irritating. It’s also not always easy to know what it is pointing to. The noise amplifier is, thankfully, more obvious in what it wants players to locate, and the Shiba is a fun gameplay element where Yagami can take his canine companion out for a walk, and maybe even solve a crime. Most of the new gadgets are fine, but again don’t add anything meaningful to the core gameplay.

Returning in Lost Judgment is the fast and frantic brawler combat system. Yagami has the ability to move through three unique combat styles — Crane, with its swift and quick movements; Tiger for heavy hitting; and Snake, which is mainly used for disarming and is more of a mid-range technique. Each can be used interchangeably and comes with unique EX Skills. Players can also trigger devastating finishers when the triangle button is prompted on the screen, though when in EX Mode, this prompt sometimes does not work. When Yagami slaps around his foes, players can feel the weight of his punishment based on the animations, which are glorious to look at. There is nothing more satisfying than taking down a challenging foe with a bicycle finisher. Given how varied a lot of the new gameplay elements feel, the combat and story continue to be the more tried-and-true elements in this series that constantly shine. 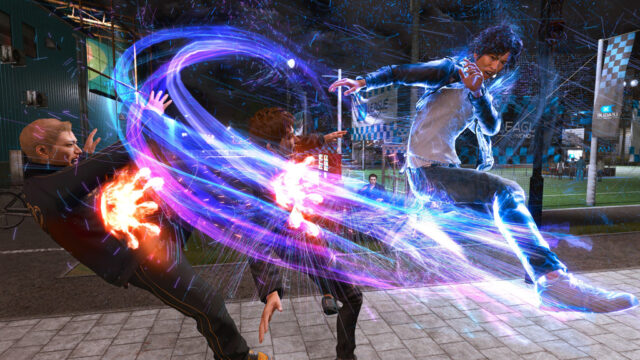 Also satisfying is the game’s audio. The Japanese voice acting is passionate and expressive, with the English cast also doing a great job of making the characters come to life. While there isn’t a lot of music in the game, what is there is solid, and the opening track “Rasen” absolutely slaps. The graphics within the cutscenes still look fantastic and well-defined, and the in-game graphics are serviceable, though there is definitely graphical clipping both when walking through environments and during combat sequences. It’s not detrimental but still noticeable.

While I enjoyed the experience of Lost Judgment overall, I finished the game with a lot of nagging feelings. The game was definitely rushed in some areas, and some more tender love and care were definitely needed in terms of refining the newer gameplay elements. It’s clear that Ryu Ga Gotoku Studio had a lot of new detective elements it wanted to explore, it’s just a shame most of them don’t work without either killing the game’s pacing or are just plain boring. The story, however, is very powerful and has a lot of presence, but makes some uncomfortable missteps. The combat is fast and frantic but can be glitchy at times. Everything points to this game being rushed, and it definitely shows in so many areas. Lost Judgment is a great game plagued by lots of little mistakes that sadly are too much to ignore. While it’s not as strong as the first installment, it’s worth playing to see how Yagami’s story comes to an end.