Last year during a Steam Sale, I accidentally discovered the original Knights of Pen and Paper +1 Edition. I hadn’t heard much about the game, and at a low cost of entry, I decided to give it a whirl. While I wasn’t completely smitten with the game, it did have a lot of great ideas and was surprisingly accessible to non-tabletop gamers. Despite my somewhat low score of the first game, I still had some interest in this series and decided to give Knights of Pen and Paper 2 the benefit of the doubt.

Knights of Pen and Paper 2 begins in the 16-bit era, and opens the same way its 8-bit predecessor did, the player crafting his or her own party in the quaint village of Spawn Point. It is here the DM explains that the notorious Paper Gang has been wreaking havoc on villages far and wide, and that they must be put down for the sake of peace. While the story is quite simplistic, the overall writing makes up for the basic plotline. Much like its predecessor, the game plays with tabletop gaming tropes, turning them upside down and crafting a fun environment for players to enjoy. Although the odd typo slips in here and there, the writing is far sharper than the first game, giving the player tons to chuckle about.

The gameplay of Knights of Pen and Paper 2 is very much identical to the first game, though it’s clear Kyy Games has polished it more. Party members are assigned a class and race, each with their own active and passive skills. As the character levels up, points can be placed into the skills to beef them up. While the game still consists of turn-based battles and randomly rolled initiative, this sequel is far less grindy than the first game and the balance between the gameplay and plot is much smoother. Moreover, battles move at a much quicker pace and the plot doesn’t feel padded with extra nonsense. 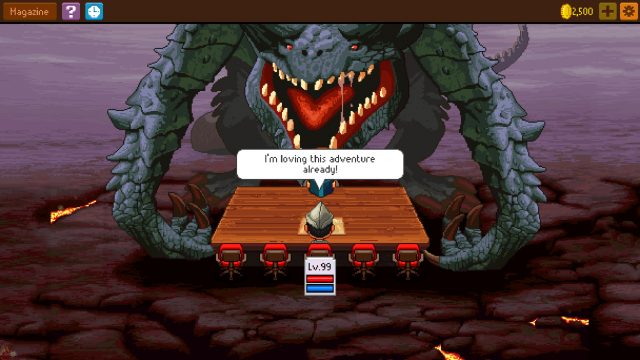 As a plus, some new mechanics have been added to keep combat engaging. Each area the party enters has random effects that have a small percentage of occurring, from volcanic fire to mobs of people trying to cut the party down to size. This addition definitely helps keep the battles interesting, and some of the effect can be negated by randomized resist rolls. In fact, there’s just more dice rolling in Knights of Pen and Paper 2 in general, whether it’s to avoid traps, investigate treasure, or escape turbulence in one’s airship. All is managed by the luck of the dice and just having these little enhancements to the gameplay makes Knights of Pen Paper 2 feel much more engaging than the first game. It’s not without drawbacks of course in that relying on dice rolls means players can have both strings of bad and good luck, but that’s part of what makes dice rolling appealing in a game that attempts to mimic Dungeon and Dragons — everything is left up to chance.

However, while the gameplay and story remain solid for the majority of the game, the endgame is pretty rough. Grinding becomes necessary in order to defeat the Paper Gang, and in this style of game, grinding feels like a chore. While the combat is much more polished, this is not one of those games that players can play for long sessions without the battle system feeling somewhat stale. In small bursts it’s enjoyable but thing break down in the post-game as it requires so much more back and forth in terms of the quests that it gets to be fairly dull.

The quest structure in Pen and Paper 2 is exactly the same as the first game, and that means there isn’t a lot of variety. There’s still a lot of fetch quests, defeat x number of enemies, travel to x location to defeat a boss. This is fine and dandy, but the game doesn’t shake it up enough for it not to feel somewhat stale. 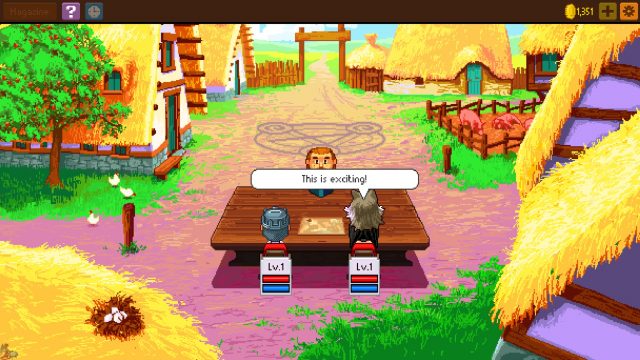 We’re going on an adventure! I call elven rogue!

There’s also a lot of recycling in the audio department as the game features the exact same tracks from the first game. The songs are decent, but it’s too bad there isn’t a lot of new offerings in the sound department. Graphically, Knights of Pen and Paper 2 does a fantastic job of mimicking the 16-bit era of gaming, while also imposing its own style. There’s definitely a lot of care in the graphics and design of the game, and it’s visually appealing.

One of my biggest praises for the first game was its level of accessibility, and I feel like Kyy Games really amped it up a notch with this installment. I found myself really enjoying Knights of Pen and Paper 2, and I found myself more enticed by the gameplay this time around. While the game still boasts levels of simplicity in terms of gameplay and storytelling, it feels like Kyy Games built off of what the previous developers created and polished it to make a much more enjoyable product. While the game isn’t without flaws in terms of the level of recycling from the previous game, it still passes its charisma check without much effort. 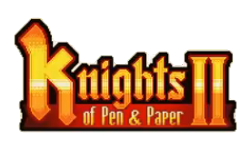