I WANT TO FIGHT!

I admit, I miss tabletop gaming. I miss the DM trying to kill off my characters. I miss creating ridiculously out-of-the-box characters. Heck, I miss the days of popcorn, Mountain Dew, and just hanging out and rolling some dice. Those days have been gone for me quite some time ago, and yet playing a little game called Knights of Pen and Paper reminded me of those good old days.

Knights of Pen and Paper attempts to mimic tabletop gaming for an accessible audience. Players start by selecting three noobs to join the adventuring party, along with their class and starting skill. Like any tabletop RPG, as the adventuring party explores, kills baddies, and completes quests, they earn experience to level up and gain more skills. Each party member gets one skill point every time they level up and can only put points into one of four skills. While this creates simplicity for those unfamiliar with RPGs, it doesn’t provide a lot of variety.

In fact, variety is what Knights of Pen and Paper struggles with throughout its twenty hour campaign. Although the backgrounds mimic an 8-bit style, there isn’t much in terms of detail or design. The soundtrack loops, but it feels like there’s only three tracks in the entire game. Although there’s plenty of classes in the game, many of them are locked and the requirements for unlocking them appear random. The base classes — paladin, mage, cleric, etc. — while classic, are trapped with only four skills, which wouldn’t be the case in tabletop gaming. 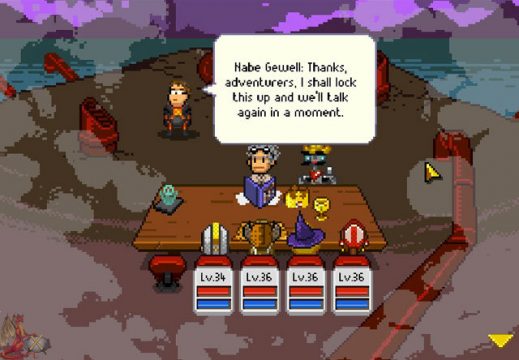 While variety isn’t the game’s strong suit, accessibility is. It provides a simple turn-based battle system wherein players can select between attack, skill, defend, item, and flee. This makes for an easy learning experience, but it lacks any real depth that a tabletop game has. The game is also surprisingly grindy, and while it does a great job of teaching players what to expect in encounters (usually enemies three to five levels higher than the adventuring party), it’s a bit crazy how much players will have to stop and grind because it’s not entirely on par with the party’s level. It feels like the developers set out to make a simple RPG to give players the feel of tabletop gaming, but the combat could have benefitted from actual dice rolls on screen to indicate whether or not the player’s characters succeeded or fail in their actions. However, with the grindy combat, perhaps adding dice rolls would have just made everything take longer than provide more accessibility. Still, the combat lacks depth and it needs something else to make it a more engaging process.

Dice rolling does exist within Knights of Pen and Paper, it’s just not as frequent as it should be. Dice rolls occur when players travel between areas, failures leading to battles, successes leading to safety. Dice rolls occur when players are mining for grindstones or moving through dungeons. These elements are done well and are fairly straightforward, but this game would really benefit if it was implemented into all actions, especially if its goal is to mimic tabletop games. What’s further disappointing is the campaign itself. While the writing is charming and hilarious, the majority of the quests are either escort missions, collecting items, slaying some bad dudes, or traveling from place to place for plot purposes. The amount of backtracking in this game is brutal and inexcusable, and even the adventuring party complains about it. It goes back to that problem of accessibility versus variety — on one hand, the campaign should be easy to learn and follow along, on the other hand there should be more to do than then the standard affair. The charm in the writing, and even its awkward translation errors, can only go so far and will likely leave veteran RPGamers wanting something more substantial.

However, Knights of Pen and Paper does succeed in its overall atmosphere. Players get the sense of gamers hanging out, bantering, and asking to pass the Mountain Dew. There is an overal sense that the Dungeon Master is out to kill the adventuring party, and the back and forth within the writing really does work well. The graphics and music, though overly simplistic, are vibrant and give the feeling that players are on an adventure and there is loot to be hand. The game is also a fantastic time waster because in its lack of depth it success at being the type of mindless game where players find themselves going, “just one more quest.” Considering all of the game’s flaws, it admittedly succeeds in the one area that for some people matters most: it’s actually fun. 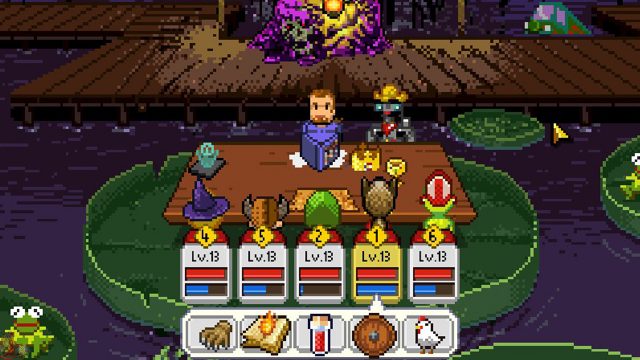 There are some perks in Knights of Pen and Paper‘s PC release that differ from the original mobile version. For starters, it allows players to leave party members at the tavern, and bring a new adventurers into the party. They can roll for a new character and not feel like they have to start their entire campaign from scratch. There’s also an extended campaign for those who want to explore more of what the game has to offer, and there’s tons of new dungeons and loot to acquire. The main campaign can be completed in around twenty hours, with the extended campaign offering quite a bit of repaly value. There’s also tons of items that can be purchased in shops that can give added bonuses to various stats, which is a nice cosmetic feature.

Knights of Pen and Paper is a sweet little throwback to the days of pen and paper gaming, but its simple approach may not be enough to entice every RPGamer. Yes, the combat is simplistic, but it’s fast and easy to roll with. Sure, the story is simple, but it’s cute in its presentation. Knights of Pen and Paper‘s imperfections are many, and yet it’s completely easy to sink time into. It’s straightforward in its approach and yet, despite its flaws and frustration, I kept playing. Knights of Pen and Paper will never offer gamers a deep experience, but it offers mindless gameplay that admittedly can keep you coming back for more. 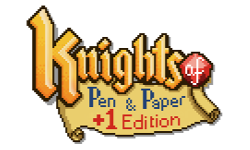