An Army of One

Indivisible was one of the games that impressed me the most when I got an early chance to try it out at E3 in 2018. Maybe it was the beautiful, hand-drawn art style. Maybe it was simply a craving I had for a good Metroidvania to wile away some time with. Over a year later, Monster Boy and the Cursed Kingdom and Bloodstained, both also sampled on that show floor, have both come, gone, and left quite big shoes to fill. Lab Zero Games and 505 Games have now released Indivisible and ultimately I wish I was more blown away. While it features some amazing character designs, witty writing, and a phenomenal voice cast, it unfortunately overstays its welcome with its long-winded dungeon designs and tedious combat system, key areas any Metroidvania absolutely has to nail.

The story centers on Ajna, a headstrong sixteen-year-old who’s spent her whole life being trained in the art of battle by her father, chief of the remote village of Ashwat. As the game opens, Ashwat is beset by the conquering forces of the malicious Lord Ravannavar, and Ajna’s father perishes in front of her eyes in the chaos. What starts as a quest for revenge against the evil Ravannavar soon becomes a journey that teaches Ajna about her mysterious past, as well as how to believe and trust in others.

As Ajna travels through the land, she comes across others who agree to aid her on her path. An unexplained power within Ajna then stores these Incarnations within her mind, stylized as her Inner Realm, unleashing them to assist in combat and during plot points. Each of these two dozen or so Incarnations, as well as the remaining supporting cast, are a triumph of colorful, memorable, unique character designs; the developer’s knack for visual design apparent in past titles like Skullgirls really shines through, and Indivisible’s ensemble is as distinctive a bunch as one is likely to meet. 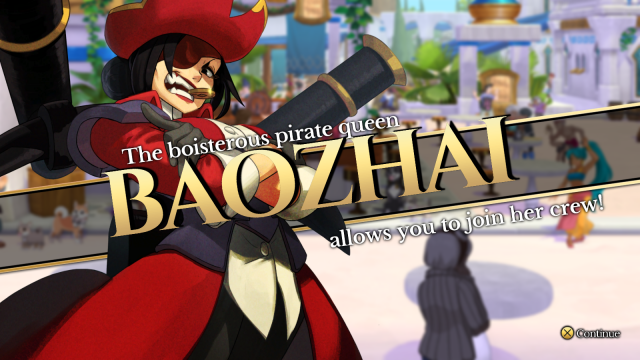 The splash screen alone is worth collecting all possible characters for!

Not only do characters look intriguing, the dialog for the core group is both fascinating and genuinely very funny, a difficult feat to accomplish. The banter between Ajna and Razmi, a withdrawn jungle sorceress with a penchant for gross and icky things, is oftentimes laugh-out-loud hilarious, particularly when she butts into conversations that otherwise don’t concern her just to give a quick opinion or make a rude comment. Equally comedic are the interactions between Ajna and Nuna, who somehow inspire each other to such heights of air-headedness that the remaining party soon dubs the two of them “Team Idiot”, a chant which they happily adopt as their slogan.

Indivisible’s cast is much more than just a collection of nicely-designed faces, however. The game’s voice cast is quite simply magnificent at hitting all the right notes of comedy, drama, and despair. In particular, Tania Gunadi as Ajna is given ample opportunity to shine. The rest of the diverse cast perfectly match their equally culturally diverse characters, though it’s evident that some characters are simply lost by the wayside, given very little screen time and not much in the way of development, a side effect of the breakneck pace at which they are acquired in-game. Rounding out the aural experience is a very competent and catchy score by Hiroki Kikuta, the composer responsible for a number of entries in the Mana series, with a score that perfectly matches the global sensibilities the team was clearly inspired by.

This lack of focus on certain cast members also extends to the combat system. The design team deserves ample praise for actually making each of the many characters play quite differently in battle; for instance, the professional athlete twins Hunoch and Xiboch pattern their combat style after a training session, incorporating a timing mini-game into their attacks, whereas other characters may excel at aerial or ground attacks, or prefer to attack from a distance or using elemental affinities. But again the game’s embarrassment of riches rears its ugly head, as it’s simply not feasible to constantly swap characters in and out of the four-man battle lineup in order to learn each character’s playstyle all that well, making it more economical to simply stick to a tried-and-true main party and sidelining potentially worthwhile characters entirely. 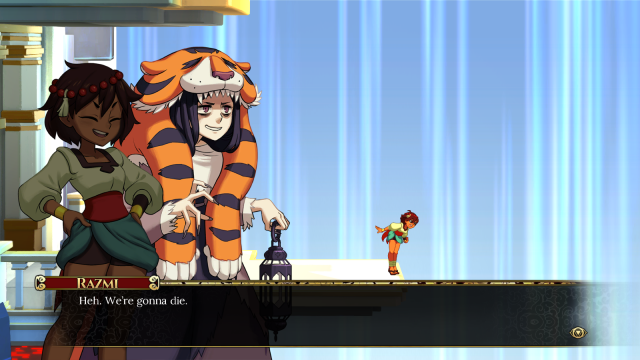 Razmi’s dry humor at the most awkward moments is impossible to beat.

Players spend a surprisingly large amount of time with Indivisible’s take on real-time turn-based fighting, as opposed to the straightforward action combat of much of its contemporaries. Each of the four characters in the active party is assigned to a particular face button (or key if playing on the keyboard), and pressing the corresponding button when its on-screen gauge is filled sends that character to attack. Multiple characters can attack simultaneously, and pressing up or down while attacking may lead to juggles, aerial moves, or any number of more unconventional techniques depending on the current group of fighters. Pressing the face buttons during enemy attacks instead makes the corresponding character block, with well-timed blocks being vital during the game’s latter stages. But with many enemy types that have immunities against certain attack types or are simply damage sponges, the potential fun the combat system could have added to the game is quickly sucked away. Nothing is duller than having to slowly sap away individual health bars of a group of enemies one by one simply because they weren’t clumped close enough together to take simultaneous damage from the group’s attacks.

During all combat, however, as well as the rest of the game, animation is smooth and pretty, and each character will likely get at least a guest slot in the combat party at some point just to let players witness their combat animations. Dialog scenes are a special treat, offering full-screen character portraits in various poses to complement the spoken conversations. That’s not to discount the effort that went into designing other characters: even NPCs in the game’s cities and villages sport unique and interesting designs that rival most games’ main cast. There are even a small handful of fully hand-drawn cinematics over the course of the game that are nothing short of luscious. 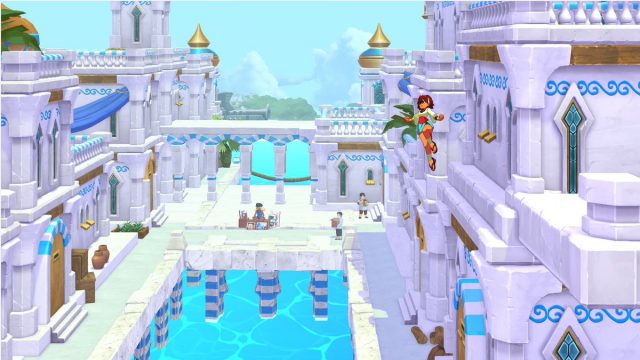 Port Maerifa: if only every area in the game could be as enticing as this.

Environments are more of a mixed bag. Certain places, like the port town of Maerifa, are as vibrant as one could ask for. But when traveling through the world, outside of settlements, gorgeous graphics alone just don’t do the trick. The game places a heavy emphasis on platforming through its dungeons, but it has a tendency of severely belaboring the point, forcing these segments for far longer than they can sustain a player’s enjoyment. Seeing the same, admittedly pretty, environment for these long stretches of time undermines the experience; there simply isn’t enough variety built into the gameplay, and having the marathon platforming only broken up by tedious combat doesn’t improve matters a great deal. Even the handful of fast-travel stations eventually accessible don’t encourage going back to find new nooks and crannies with freshly-unlocked abilities, as the travel distances and nerfed enemies to fight along the way create far too much of a hassle to make it worthwhile.

Any Metroidvania title’s bread and butter lies in how much fun it is to explore its environments, constantly unlocking new abilities along the way that make returning to old areas just as full of discoveries as the first time through. While the game certainly isn’t shy about doling out new abilities to maneuver around with, it’s the actual areas themselves that are just not much fun to poke around in, in some cases seeming to stretch out interminably with one lengthy platforming challenge after another. Expertly executed designs, visuals, voiceovers, and musical score still make Indivisible a great joy to behold, but its shortcomings do take away some of the triumph of actually playing it.