…and Again and Again…

Designer Shoji Masuda is not widely known in the west, but in Japan creations such as Linda³ and Oreshika have stood out thanks to their unique ideas. Hero Must Die is a game that originally released on Japanese mobile phones in the late 2000s, before being remade for PlayStation Vita in 2016. Now western RPGamers are able to sample the odd delights of the anti-RPG in the form of Hero Must Die. Again, a remaster of the Vita version available for PC, PlayStation 4, and Nintendo Switch. Even though much of the constituent RPG parts are run-of-the-mill, it’s well worth checking out for how its unusual ideas and elements almost form a puzzle that slowly comes together across its multiple short playthroughs.

It’s immediately clear that this is not a regular RPG, as the game starts with the final boss fight. The nameable hero defeats the Demon Lord Guille, but perishes in the process. However, the angel Julia informs him that he has been granted five days to put any affairs he wishes to in order — perhaps by helping out some of his former allies or influencing some lingering issues in the nation — before he passes on and a funeral is held to honor his final achievements. As the five days tick down and his end approaches, the hero also loses his strength; starting with 999s across the board, by the end of the fifth day all of his attributes will go down to single figures. As his power wanes, he also loses the ability to cast certain important spell, such as the very useful teleport. This makes it so that having a plan and getting things done as quickly and efficiently as possible is crucial to success.

This makes Hero Must Die a game that is all about multiple playthroughs, with each taking only a couple of hours at most. The first playthrough is generally doomed to being an abject failure, and really is for players to learn where things are — something the game at least notes. Playthroughs after the first one add a few more characters, while each of those characters whose initial requests have previously been granted may provide an additional request in following playthrough. The first one or two runs are all about learning, but after this it’s imperative to go in with a plan, such as focusing on a select few characters’ requests, and the relatively small scale of the world means it’s not hard to build up the knowledge required to formulate one. By the time that third playthrough rolls around, players should have a pretty strong idea where nearly everything is and what needs to happen to achieve at least a couple of goals. 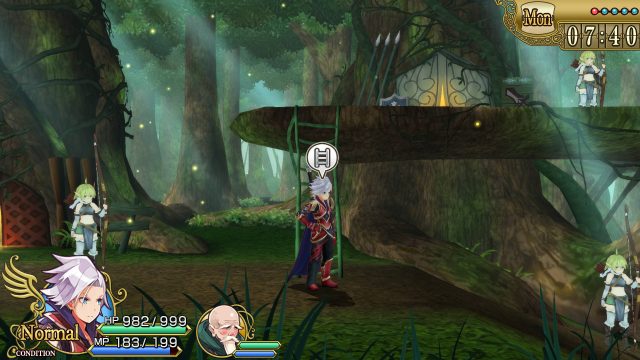 It’s important to ensure all the mainstays are present. Isolated elf village, check.

The story itself is not very deep but there’s enough of a mystery to keep it interesting; the main plot point concerns the hero attempting to remember the beloved he was fighting for and whom no one else remembers, a challenge made more difficult by the hero’s general amnesia. Pretty much everything else about the adventure prior to the final boss is thrown by the wayside. The funeral scenes and accompanying destiny of the nation provide neat touches and help build upon the lore of the nation, but it soon becomes obviously less about trying to extend the nation of Robilia’s lifespan and more about attaining the completions necessary to unlock the true ending. Though the true ending is technically possible to achieve on the fourth playthrough, most players will need more — I ended up achieving it on the ninth — with it requiring the previous completion of certain requests. The system works nicely and there is a good amount of differentiation between each character’s requests; the only annoyances in the review playthroughs came in completing the additional requests for a couple of characters, where it was not entirely clear what exactly triggered their appearances or if any other active requests in the run had prevented them.

The world map is divided into a number of locations and, outside of using teleport skills and items, moving between them takes up precious time. Time is paused during any event scenes and while in the menus, but otherwise it is always progressing in a leisurely manner. Whether in dungeons or just wandering around, players won’t want to spend unnecessary time checking everything. Movement within each area is all from left to right, or vice versa, but there are often multiple levels accessible through ladders and the like, and most contain multiple exit points to go into other routes, rooms, or buildings. The dungeons aren’t particularly huge and work well with the quick speed of playthroughs, but still have enough in them for players to enjoy the initial exploration and still be able to recall the quickest routes in the future.

There are plenty of encounters to find in dungeons, pitting the hero’s party against up to four foes. One friend joins up at the start of every playthrough regardless, but any others must be recruited by accepting their requests. Battles use a very straightforward turn-based system with the standard attack, defend, magic, and item options, as well a colour-coded set of four elements and corresponding weaknesses. They generally don’t last long and for the most part don’t provide particularly strong challenges, especially at the start when the hero is at the zenith of his power. There are no in-battle revives; allies will return at 1HP after battle, but if the hero falls they will need to spend six precious hours resting up. It works fine, but there’s really nothing special about the combat. 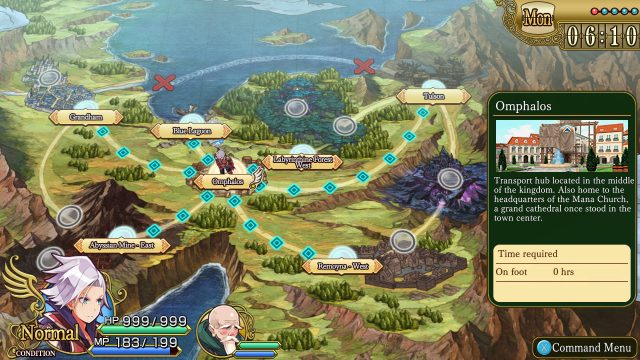 A successful playthrough is all about getting to the right places in the most efficient way.

The hero has a condition status that affects how quickly his abilities decrease, so some resting at the inn is beneficial to an extent. The most powerful equipment will start to drag him down further, at which point weaker gear should be substituted to prevent the cycle from becoming untenable too quickly. Recruiting other party members can help mitigate the hero’s weakening, but the danger of the hero going down is probably too great to put any real expectation on successful battles in the final day or two. All of these RPG gameplay elements are generally as base as they come, but the way the game’s premise plays around with them makes for a fascinating logical conundrum, as well as a highly satisfying feeling when a playthrough goes well and adds progress to the overall achievements that are tracked in the game’s gallery.

Hero Must Die’s solid music accompaniment is composed by Mana and SaGa mainstay Kenji Ito, and though the number of tracks is limited, they are enjoyable to listen to without getting tiresome. The Japanese voice acting is also solid, doing what it can with a fairly limited script. The game doesn’t have anything impressive on a visual front and it quite obviously looks like a remastered PlayStation Vita title, though that at least ensures a clearly readable text size. It does a nice job using 3D alongside the 2D movement to give it a distinctive style, but the locations are all (intentionally) generic fantasy ones without anything memorable about them.

Hero Must Die offers a fascinatingly different approach and is well worth checking out just for that. All of the RPG building blocks used are of the most basic sort, but the game manages to combine them effectively with its wilder ideas to ensure that there’s always a sense of building towards a bigger picture and a final goal as well. It takes an initial period to get used to, and there are still a few annoyances here and there, but there’s lots of satisfaction once the workings of the game become clearer and the path to progress is found.