At one time or another, most people have felt stuck. Trapped by their circumstance or stuck under the heel of an abusive authority figure, they may seek a way out to the life denied to them. It’s in this situation that Zagreus, the protagonist of Hades, finds himself. Fortunately for him, he’s an immortal god. Unfortunately for him, his big impediment is his father Hades, the Lord of the Underworld. But what is a grueling trial for Zagreus is a joy for players all around. In Hades, Supergiant Games has crafted an exemplar of both the action and rogue-lite genres, while pushing narrative in a way that even non-fans can appreciate.

Having spent his entire life in the Underworld, Zagreus begins seeking an escape upon learning of the existence of his birth mother Persephone, who disappeared from the Underworld years prior. With the help of his adoptive mother Nyx, the gods of Olympus who have only just learned of his existence, and several other familiar faces from Greek mythology, Zagreus hops out of his bedroom window and attempts to make his way to the surface. Each time he fails, he’s dropped off back at the game’s hub where NPCs will comment on the progress he’s made. In a strange turn of events for Supergiant Games, the story may be its weakest part. The writing isn’t bad, far from it, but the overly-repetitive nature of the game means the plot also falls into a distinct rhythm: complete a run, walk around and talk to everyone in the hub. The story that is there is thin, but is enough of a carrot on a stick to keep players invested. 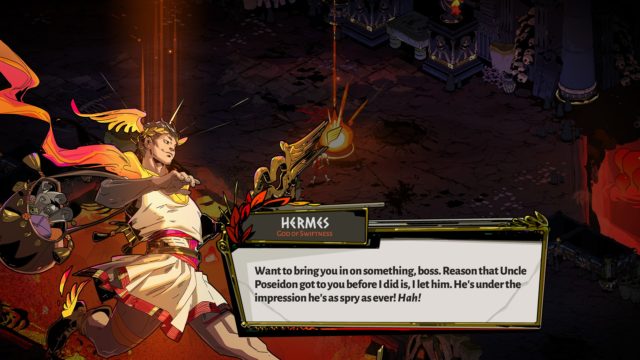 It’s a good thing then that most of the time in Hades is spent fighting through the hordes of the Underworld looking for a way out. Building on the foundation laid in Bastion, Supergiant Games’ take on isometric action has never felt better. Controlling Zagreus is simple, with each face button corresponding to a basic attack, a special attack, a cast — a limited-ammo gem that has to be recovered before it can be fired again — and a dash. There are six weapons to choose from, each offering a pretty distinct playstyle. Once in a run, the ways to alter and enhance Zagreus open up, and the variety in the game truly begins to shine. Each room completed gives a reward, some of which are boons granted by an Olympian. These boons alter and improve Zagreus’s standard abilities by increasing damage and adding unique properties, such as Poseidon bestowing a wave effect that pushes enemies or Athena granting a shield that reflects enemy projectiles. Boons aren’t complex by themselves, but stacking enough of them up creates chaotic interactions that fill the screen with effects.

Given that the rewards of most rooms are random every run, it’s impossible to anticipate what exactly will be available. Without the chance to fully pick boons, Hades pushes players into learning the ins and outs of all of them, incentivizing players to make the best out of what’s available and encouraging new and unique ways to customize a run. And the combat is just a sheer joy throughout. A run covers four different areas of increasing difficulty, each with an associated mini-boss and stage boss. Initially this feels overwhelming, but the game quickly eases players into a good rhythm and runs will become easier. It’s not rare to feel entirely powerful as Zagreus zooms around the stage dealing with enemies with little effort. The later boss fights can be more difficult and are a bit more static, but with the right combination of upgrades, the feeling of mastery over the combat is second to none. More importantly, it never stops being engaging. 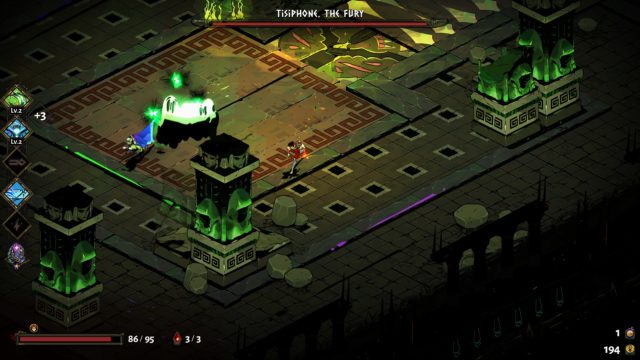 There’s about to be a lot more green covering the stage.

A large part of constant engagement is the game’s pacing. There isn’t any exploration in Hades; instead players are presented with a series of combat rooms. After completing a room, up to three doorways will be available, each indicating the reward for the next room. In addition to boons, rewards can also include various resources to spend on things during and outside of a run, health increases, or items that provide slight improvements to weapons and boons. There is the minor benefit of giving players more control over how a run plays out, but more importantly it means there is very little downtime. Runs themselves are also pretty succinct, topping out at just over a half an hour. It’s a testament to the gameplay loop that it can simultaneously scratch that “one more run” itch while also respecting the player’s time.

That doesn’t mean there aren’t things to do while not escaping. Hades‘ hub packs a lot of personality in a very small space. Characters populate the space, waiting for chances to talk to Zagreus or each other all while never repeating a line of dialogue. While the story itself is nothing to write home about, all the characters are impeccably written and their own smaller stories all well-realized. Through little more than a portrait and a handful of lines every run, the cast comes to life in ways that are striking and memorable. The designs themselves are equally distinct and charming, creating a fresh take on age-old characters that nonetheless captures their essence. In rogue-lite tradition, there are means of empowering Zagreus for future runs in the form of the Mirror of Night and a House Contractor. Both require a different form of currency gained during runs, but in exchange grant permanent buffs to Zagreus or the Underworld itself. A nice little side effect of this is the small bit of decision-making each run provides: empower Zagreus for the current run or for all future ones? The changes may feel small at first, but add another layer of incentives to the core of the game while not adding any significant complexity or filler. 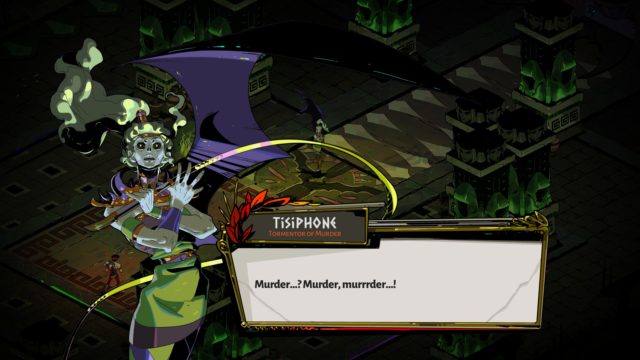 Okay, maybe not everyone is cheeky.

It’s at this nexus of quick decision-making, speedy action, responsive controls, and positive feedback that Hades sings. Every decision is rewarded, every run empowers the next, and every run is just different enough while maintaining its strong bedrock. Nary a moment is wasted and even in the face of failure the game has something new and unseen to offer. The game even offers a wide berth of difficulty options, including optional challenges that give increased rewards and an optional God Mode that decreases the damage Zagreus takes every time he fails a run. In short, this is a game anyone can and will have fun with. Hades may also prove one of the better examples of Early Access as well, as the game feels finely-tuned in a way that many of its contemporaries do not. It also continues Supergiant Games’ penchant for creating top-notch audiovisual experiences. Hades is another graphically stylish entry into its canon, buoyed by its excellent cast and colorful effects. The music is also catchy, though it doesn’t quite match up to some of the company’s previous efforts.

Rogue-lites may be an acquired taste for some, but it’s hard to envision a world where Hades isn’t an easy recommendation. By the time credits rolled on the main story, there was plenty more to discover and unlock as well as the desire to do so. It may not have the infinite replayability some of the others in the genre are often considered to have but its focus on narrative and characters will give a satisfying enough conclusion even without all that. It’s a game to lose a night to or play in reasonable chunks and still get something out of. It is Supergiant Games’ best effort by far and that is no small feat.