Don’t Mess with What Works

It has been a year since the release of the original Guild Wars, and ArenaNet and NCSoft have finally reached the release of the stand-alone Part 2 of the Guild Wars saga, Guild Wars: Factions. Since its debut, GW:F has promised gamers an extensive PvE (Player vs. Environment) campaign in the same vein as the first game, as well as updated PvP (Player vs. Player) systems. In some ways, what they promised has come true, but in others…not so much.

The battle system of GW:F remains largely the same as that of the original. The game introduces two new professions: the agile Assassin and the artillery-based Ritualist. The Assassin works much like anyone would expect. They run in, deal a large spike of damage, and get out before they are destroyed. With combos and ailment-causing attacks, they more than make up for their lack of armor, and their ability to teleport in and out of battle makes them rather versatile players. On the other hand, the Ritualist can create spirits who not only attack from a stationary position but also provide effects such as healing to all players within their range. The added skill trees of Restoration (healing) magic and Channelling (attack and support) magic further make the Ritualist a great addition to the game. As always, the player can choose any of the eight classes as a primary class, as well as one of the other seven as a secondary class. There are specific skill trees for each class that are only accessible if players choose it as a primary. Not only that but the primary class determines what kind of armor they get. Options exist in the game that allow players to change their secondaries later if they wish.

Fighting is the same as the original GW. Each class has a total of about 90 skills at their disposal, and players may only bring eight of them into combat, one of which may be an ‘elite skill.’ Since this is a bit restrictive, it is necessary to either group with other players or the AI-controlled henchmen to succeed in battle. Surprisingly, the henchmen are smarter than your average moron, so they will be able to get players through most of the campaign easily. They do have some quirks, but ANet is quick to sort out any problems that arise. The nice thing about the henchmen is that they will not run into battle and aggro fifty thousand enemies, only to die and complain about not being healed. Always a plus. 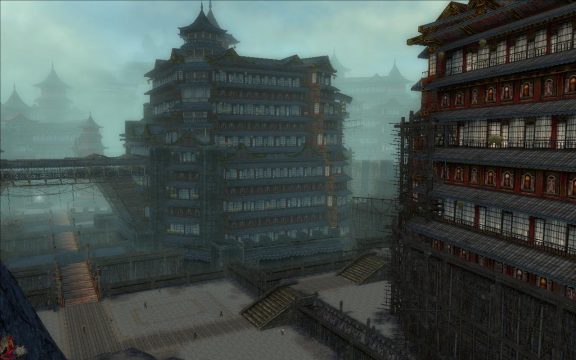 The towns are quite breathtaking.

The GW world is divided up into two types of areas: Towns/Outposts and the field. Towns/Outposts act as interactive chat rooms, where players can meet everyone on their server who is in the town (towns are further divided into districts to help with server load), as well as form or join groups and shop for materials or equipment. The field is a bit different. The entire map of GW is instanced, meaning the moment a player leave town, a copy of the world spawns for them and everyone in their party. They will never meet another party out in the wild, nor will they ever have someone steal their kills. However, this also means that they cannot go around killing everyone else willy-nilly. That is what PvP is for…

In GW:F, PvP is quite a thing in which to participate. It is incredibly fast-paced and requires that each player coordinate with the team. Standard PvP arenas exist where players can party up or join a random party if they just want to get to the action. Even further, there are a series of tournament battles that let players fight each other from all over the world for a chance at winning the Favor of the Gods. Owning the Favor allows the people in that region access to high-level PvE dungeons. There are also Guild Battles, with players in one guild fighting another for a chance to move up the guild ladder. Each season usually ends with the highest guilds duking it out for cash prizes.

The new content introduced to PvE is quite problematic. ANet tries to make the game as grindless as possible, but then they introduced the Factions system. The capital cities for each of the factions have a special high level dungeon that is only accessible by the guild that owns the town, as well as anyone they wish to invite. To own a town, players must gain Faction Points. Faction Points are gained by completing quests for that faction or by playing the competitive missions. Players need an obscenely high amount of Faction Points to take over a guild who already holds the town, and then they have to maintain it, because guilds lose a percentage of their Faction Points per day. So the net result is that players have to grind incessantly to keep the area. The nice thing is…players do not have to take part, and the player can just convince them to invite him or her into their party if they cannot find enough players. Ultimately, the new content does not do anything great, but the rest of the game is still solid.

The music is composed by Jeremy Soule (of Morrowind fame) and is very, very good. Everywhere the music just fits and sounds like a professional group of musicians tackled every piece. If players are looking for something pleasant to listen to while they destroy the critters of Cantha, then say no more. The sound effects are good as well — the game is very good at emulating the sound of metal hitting metal, fire spells, etc. The only problem is that it quickly becomes repetitive and eventually just starts to grate the ears. 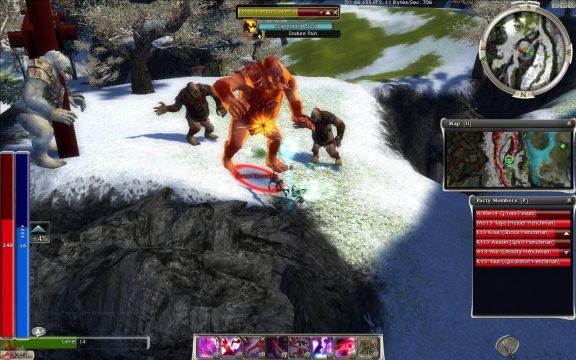 The game can be anywhere from Easy to Hard, depending on who is playing in or against the party. On the whole, the campaign is of moderate difficulty, though some missions that can frustrate even the toughest of players. A group may be doing wonderfully, but then someone screws up and aggros 30 enemies four levels higher than the team, and then they have to start over. PvP is hit or miss, as a team can do incredibly well, only to come across a team that is just a bit more coordinated than they are, and then gets creamed. Overall, the campaign can take around 30 or more hours to complete, and then PvP and creating other characters only adds to that total.

The interface is very simplistic, which is a good thing. Certain keys open different windows such as inventory or character sheet, and hitting Enter brings up the chat interface. Switching from guild chat to trade chat is as simple as clicking the appropriate tab above the chat bar (or by pressing the specific key). The eight skills correspond to the numbers 1-8 on the keyboard, and everything is remappable.

The game’s story takes place on a different continent than that of the original. It seems that a spirit who had been locked away, Shiro, has come back for revenge. By killing the the emperor, he plans on returning to his former glory, and it is up to the heroes to stop them. Brother Mhenlo, who players may remember from the first game, has gone to get help from Tyria (and thus connects the plot between both games), and Master Togo is collecting help in Cantha. The story is not bad, but it certainly does not break any new ground. There are some plot holes here and there, and the people in towns do not really provide very much useful information. But all in all, nothing very original.

While Guild Wars: Factions does not break very much new ground in the MMORPG arena (at least nothing more than its predecessor), it does improve greatly upon the original. And with the release of Guild Wars Nightfall on the horizon, it seems that ANet is set to continue to enhance the Guild Wars experience with each coming ‘stand-alone expansion.’ Hopefully, the new content there will not disappoint.