Light up the Shade

I admire a fair amount of what developer Talerock and publisher Asterion Games put into Grimshade. It’s a title very much in the style of something using the Infinity Engine, a design choice that’s come back into fashion in recent years. Where it unfortunately needs some improvement is in a few technical details, plus its localization.

Alister is a young Champion attempting to apprehend a ne’er-do-well when he discovers a white-haired boy named Kiba on the outskirts of Brann. Kiba proves to be amnesiac, but with command of powerful magical abilities that are invaluable in getting through the dangerous opponents located inside Brann’s sewer system. Brann is undergoing assault by an outside army, which makes getting to a point where Kiba and Alister can take stock of their situation a challenge. They do succeed in finding some friendly faces, but dealing with Kiba’s mysterious powers amid an invasion isn’t the end of the complications in store.

The fundamental narrative of Grimshade is interesting. It deals with standard ideas such as strained relations between humans and other sentient species, but puts a unique spin on them to keep the setting intriguing. Localization is an unfortunate problem, as the text through which information is conveyed does not always sound natural. Its composition is never incomprehensible, but the phrasing and word choices are not wholly natural for English speakers, which unfortunately makes delving through the dialogue more challenging, especially during numerous instances of attempted humor that don’t work due to strangely arranged sentences.  To make matters more challenging, the onscreen text isn’t very large and may require some squinting at points.  Grimshade is also set to be continued in a follow-up title, meaning that many story threads here are not resolved. 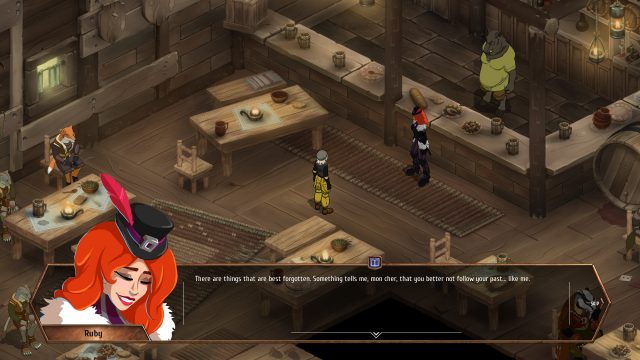 Ruby is an interesting lady. She can also hook up gamblers in need of a fix.

Exploring the environs of Grimshade is accomplished via a mouse-heavy interface. Movement is done using this tool, and objects and persons with which the player can interact are highlighted when the mouse icon is over them. This interface is not as archaic as it could have been, having an option to display all features of interest on the screen and generally making puzzles dependent upon locating certain prerequisite objects simple.

Combat is nothing like the real-time-with-pause system seen in Infinity Engine titles, instead going for a unique tactical angle. The player’s characters occupy one half of the combat field while the enemy holds the other half, and neither group can step onto its adversary’s territory. Each participant has certain actions available that are dependent upon positioning, such as melee strikes that can only be used in the row closest to the opposing side. Certain characters are also capable of automatically shielding combatants directly behind them, along with avoidance tokens that guarantee physical attacks will miss to make eliminating that protection challenging. Plenty of battles revolve around the need to carefully plan for what the enemy can do, as healing in an encounter is extremely difficult and fallen characters cannot be revived until after fighting ends. Taking actions also tires out characters and increases something called Tension, which when maximized forces the affected participant to spend a turn in a defenseless stupor to recover.

Fighting demands plenty of player attention, but is rewarding in return. Preparation is key much of the time, as the moves to which characters have access are partially determined by equipment. Regular foes are quite capable of punishing the unwary, while bosses mandate formulating a strategy. This is not because foes have huge health bars; instead they possess devious capabilities that brute force is incapable of conquering, forcing the player to think. While the difficulty can be altered at any time, even on a lower setting encounters require paying attention. Combat does take a considerable amount of time though, and the lack of any leveling system discourages getting into superfluous skirmishes. 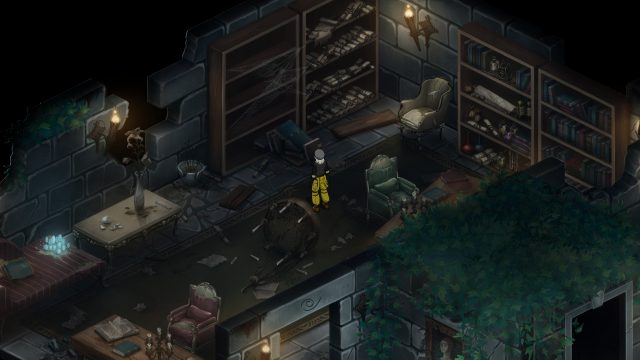 There is no way to clean this festering mess, which may dismay certain neatniks in the audience.

The wholly turn-based nature of encounters means that visual hiccups and stutters have no direct gameplay impact. They are nevertheless distracting, as are other technical issues. Character pathfinding is often poor enough when navigating environments that the player will have to steer movement closely. It is possible to run into glitches when trying to complete some quests, which at worst can force a restart of the game from the last save file.  These are not the worst possible technical glitches, but unfortunately cloud the experience.

Grimshade has an interesting character art style with a variety of portraits for most of its cast. Otherwise the visuals are reminiscent of titles using the Infinity Engine, which does not strain modern hardware but is effectively evocative. The hand-drawn locales and environments are distinct enough to give this world a unique personality. Aurally the game does not stand out very much with its soundtrack, though the music tends to complement onscreen action well.

I want to give massive kudos to a game that fits the Wilhelm scream creatively into its setting, which Grimshade does inside of a museum. The game sports an involving combat system and a fascinating world to explore, one that is ripe for expansion in a promised sequel.  I commend the work that went into this title from Talerock’s dedicated staff. The technical issues that creep up are hard to ignore though, and the localization doesn’t help a game that’s trying to have a spectacular narrative. Hopefully the promised follow-up improves on this first Grimshade.