Someday You Feed On a Tree God

Gods Eater Burst is not a great game, nor is it an exceptionally original one. Nevertheless, it’s engrossing in short bursts. Much like cheesy potatoes, overexposure makes apparent the flaws of its component parts. It’s an enjoyable snapshot of the apocalypse to play between major releases, but not likely to become a classic.

The plot follows the Far East branch of Fenrir, a global protection agency. They hunt biomechanical monsters, harvesting their cells in the name of a better tomorrow. Over the course of the Far East branch’s missions, it quickly becomes clear that everything is not as it seems. This sort of morally ambivalent environment seems like a sure fit for multiple endings and status quo rocking betrayals. However, the protagonist is a milquetoast non-entity whose decisions don’t influence the story in the slightest. Despite the wide array of clothing and combat options, the story itself is welded to unjumpable rails. In itself, the linear story progression isn’t an unforgivable sin, but it does become grating when paired with the illusion of choice. The plot and setting help soothe this complaint: both are evocative enough that watching the adventure unfold is fun in a “watching classic anime” sense.

On the topic of classic anime, Gods Eater Burst‘s strong plot is hampered by a shaky localization. Most of the voice acting is unconvincing, despite the familiar American cast. The script is partially to blame: the world of Gods Eater is rife with technobabble and posthuman philosophy. It’s not always the sort of material that can be casually dropped into conversation, despite the actors’ best efforts. Even if Crispin Freeman and Johnny Yong Bosch had given the performances of their careers, the information would still seem forced. The in-game summaries and background information are similarly shaky: it’s readable, but grammar and clarity issues detract from the overall effect.

Muting the volume to avoid the voice acting is like using a mortar to handle mosquitoes. Go Shiina’s soundtrack is a driving work that draws on a wide variety of instruments to communicate desperation and the thrill of the hunt. It’s a sound conducive to battling gods — or god-like beings, depending on whom to believe. 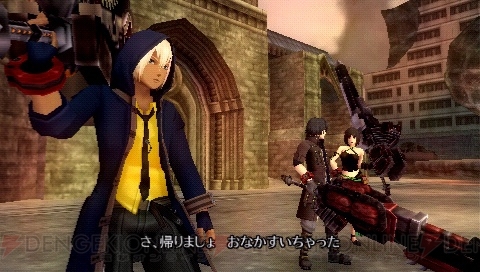 When you fight dragons, you can wear what you want. It just doesn’t matter.

The monsters of Gods Eater Burst are striking enough to earn their deific monikers. Their designs combine familiar animals with machinery, religious iconography, and downright alien flourishes. It’s easy to imagine a world under siege by these strange beasts, who assimilate and warp everyday objects. There are only a handful of base monster types, but the palette swaps are more creative than in many games. Upgrades differentiate themselves from earlier members of their family with new attacks, moving parts, and weaknesses. As with the rest of the plot, the character designs draw on familiar tropes. Nevertheless, they’re exciting to look at. The shattered environment receives similar attention, driving home the sorry state of the Earth with its shattered cityscapes and reclaimed wilderness.

Combat is fun. The game’s title comes from the trademark weapons of humanity’s defenders: the Gods Eaters. These biomechanical weapons can sprout parasitic fangs to tear cellular data from the enemy. Doing so requires a few seconds of vulnerability, but powers up the wielder in a variety of ways. The protagonist can switch between a gun and a melee weapon throughout combat. This versatility allows for plenty of tactical options — but winning doesn’t stop at offense. Enemy attacks deal a lot of damage, so dodging, blocking, healing, and knowledge of the terrain are also necessary to win. Wringing the optimal kill time out of an enemy requires learning which types of attacks and elemental damage are effective against its various body parts. Disabling individual parts causes the monster’s overall statistics to change.

With the monsters as large as they are, solo missions are hardly an option. Most missions allow the player to select three AI squad members. They follow simple formations, keep the protagonist healed, and magnify the scope of battles. Seeing three allies running and gunning their way through a large map makes knowing the team status a high priority. Who’s wounded, who’s likely to pass on status ailments, and who’s trapped in a corner? Each of the squad members has their own quirks and skills, the mastery of which are vital to heroic battling.

Even with the numerous combat options, battles tend to drag on too long. After figuring out an opponent’s weak points and attack patterns, the conflict devolves into a lengthy routine of slashing, healing, and dodging. The thirty-minute time limit for each hunt is rarely a major concern, but nor is the end of a fight typically the most exciting part. The ending sigh is one of finality, not relief. 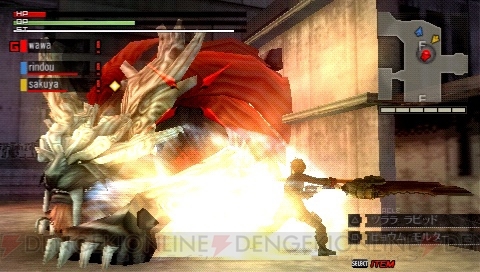 His weak point is his face? If you say so…

Worse, building an arsenal with enough weapons and other upgrades to choose between requires a lot of time with the crafting system. Crafting’s core mechanic requires harvesting monster parts and finding additional components on the battlefield. It’s a stale concept, but it makes sense within the story. Scavenging is a hallmark of apocalyptic settings, and consuming body parts fits with the plot’s sci-fi take on evolution. The interface here is less enjoyable than in battle. Inventory management sprawls over several screens, and the limited number of autosort options is a constant annoyance.

One interesting spark regarding resource management is how some armaments have branching paths. Non-completionists will need to decide if a certain rank’s fire katana is more important than its twinned ice katana. Unlocking both would be possible, but rarely worth the effort. Not only does this limit suggest the scarcity of futuristic resources, it encourages tactical knowledge of the character’s strengths and weaknesses.

Obtaining the stacks of organs necessary to build a top-of-the-line chainsaw isn’t always so tactical. Most of the time it’s just aggravated grinding. Each playthrough of the non-story missions has the same map and monster settings, making each fight the same. The one variable in each of these fights is what components are harvestable from the key monsters. In other words, the ten-to-twenty minutes spent hunting for Emperor Fangs may only result in a pile of unneeded Emperor Manes. As a result, what starts out as an enjoyable battle system becomes played out by the end of the game. If upgrading weapons and accessories toward this end isn’t enough, the bullet editor provides an additional unique sub-system to master. Although the system takes some getting used to, it requires far fewer resources to achieve spectacular results. Bullet editing is a challenge worth mastering.

Despite its flaws, there’s a lot to do in Gods Eater Burst. Earning a SSS rank on every mission, unlocking the classiest equipment, and completing all of the optional missions provides plenty of opportunities to keep playing after the final credits have rolled. Whether these opportunities are necessary is a matter of personal taste, but it would be a shame to ignore some of the more over-the-top costume options.

Ironically, had Gods Eater Burst ended at the point where the Japanese God Eater did, it wouldn’t have had time to overstay its welcome. While the second portion of the game features greater challenges, it also contains the most expensive upgrades. A killer plot would have justified the additional length. Unfortunately, the second storyline pales in comparison to the first. It takes a meandering path through an interesting idea, stretching and padding until the overall effect is merely average.

A similar judgment holds true for the entirety of Gods Eater Burst. It offers a sprinkling of entertaining character moments, but none of the cast members evolve in surprising ways. Combat is fun and suitably complex, but unable to wholly apologize for the lesser flaws that accumulate over extended sessions. The game is often more fun than its overall rating suggests, but the amount of work it takes to reach those portions is unsatisfying. In short, it’s best as comfort food: a reassuring experience that’s best not overindulged in, lest it cause a stomachache.