Tactical RPGs have been an increasingly common sight over the last few years. For some reason however, the franchise which started the genre has failed to make an appearance on this side of the Pacific until the seventh entry in the series. The title of which has been simply shortened for the U.S. release to Fire Emblem.

At a glance, Fire Emblem doesn’t offer up anything that can’t be found in a dozen other games. The game is set in a typically pastoral fantasy setting, plagued by the standard power hungry lords, conspiracies, and princesses raised in remote wilderness areas. While the story is nothing to write home about overall, the characters are at least charming enough to keep things from getting too dull.

The gameplay of Fire Emblem however is refreshingly unique in many ways. As one might expect from Intelligent Systems, makers of the popular strategy game Advance Wars, and the surprisingly interesting Paper Mario, success in combat hinges largely on the player’s skill in using the right tool for the job. Every weapon in the game is specialized in dealing with a specific type of opponent. Most swords for instance are most effective against axe-wielding foes, but woefully insufficient against enemies bearing lances. Many weapons have other specializations involved. There are weapons made specifically to deal with characters on horseback, and others made to penetrate the armor worn by certain classes. 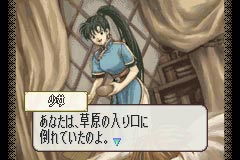 The wide assortment of characters in the game can primarily be classified by which combinations of these weapons they are capable of wielding, although most are capable of using a wide assortment, with each character able to carry five items with them, switching weapons as the needs arise. These characters have many other quirks however. Some can flit about picking locks and finding hidden treasure chests. Mounted knights can move halfway across an area, preform a quick action, and return all in a single turn. Other characters are able to move through areas otherwise inaccessible.

Fire Emblem differs from most TRPGs outside of battle as well, specifically in that one never really is removed from combat. While most games provide a brief intermission between battles where the player can shop for new equipment, chat with NPCs, and seek out new characters, Fire Emblem does not stop the action for such things. Homes of NPCs and stores appear right there on the battlefield, requiring the player to send characters away from the front lines in order to stock up on new supplies. Said supplies are quite vital as well, as weapons break after repeated use and must be replaced.

On the subject of fragile tools of war, death is a much more significant concern in Fire Emblem than the average game. If a character falls in battle, that character is gone forever, forcing players to be fairly cautious, or deal with the eventual losses. The threat of death is however far less severe than in many games, thanks to an oddly passive enemy AI, and characters’ ability to scoop up injured comrades and carry them to safety.

This brings us to one of the more bothersome aspects of the game. The Fire Emblem series as a whole is notoriously difficult. Therefore, when gearing up to release the latest entry to a broader market, the developers went somewhat overboard in easing newcomers in. The first ten missions in Fire Emblem serve as a tutorial, gradually introducing everything there is to be seen in the game via a series of simple battles. There is admittedly quite a lot to be absorbed, and the tutorial battles are reasonably challenging. However, the patronizing involved in providing a mandatory five hour tutorial can be seen as somewhat insulting.

Balancing out that insult with some pleasantries however, for a GBA TRPG, Fire Emblem is quite easy on the eyes and ears. Plot points are permeated with highly detailed backgrounds, attacks are accompanied by full screen animations, not unlike those found in the Shining Force series, and musically, players are treated to a wide variety of tracks, which change according to the flow of battle.

Another nice little treat found within the game is the unsettlingly convenient resume feature. While nearly all GBA games have some means for players to quickly save their game for the sake of conserving battery life, Fire Emblem does so automatically and constantly. Should a player spontaneously, shut the system off in the middle of an attack animation, the next time the game is turned on, an option will be present to resume the battle, and watch that attack animation complete. A harder difficulty level is also available after completing the game as an added perk.

While it may not have the quirkiness of Disgaea, or familiar license of Final Fantasy Tactics Advance, Fire Emblem is a clever, enjoyable game, featuring both classic stylings and unique quirks. With luck, the series will find a permanent foothold in North America with this entry as we have been missing out on a good thing for too long.