Starting Over Was Never So Much Fun

Fire Emblem is among the longest-running tactical RPG series of all time with its unique blend of easy battle mechanics that combine a little bit of realism with a lot of fantasy. Though the core of the game hasn’t changed much throughout the ages, Fire Emblem: Radiant Dawn still adds a couple of new features to the tried-and-true formula. If you can hack the extreme difficulty, it’s definitely a game worth picking up.

The plot starts off in the war-ravaged country of Daein, which interestingly enough, was the aggressor in the previous game. Now it is under the control of the corrupt Begnion Empire, the new source for all things evil this time around. Fortunately, there is a band of freedom fighters known as the Dawn Brigade to help right the wrongs. Central to their organization is Micaiah, also known as the Silver Haired Maiden. She has the amazing power to cure people without the use of magical staves and is renowned for her ability to see the future. With the help of her closest companion Sothe and a few other ragtag fighters, the group accomplishes great things spanning the entire continent.

Typically, Fire Emblem games will feature one main character, but this is not the case this time. Though Micaiah is certainly a major character, she shares the spotlight with Ike, the hero of the previous game. There are a couple other commanding units, but most of the plot is split between these two. Players hoping to finish the game will have to develop both teams in order to finish the final chapters.

Like most other tactical RPGs, almost all the game takes place either on the battlefield or in the plot advancement that takes place between fights. As such, players will need to be accustomed to the constant combat. Each of the game’s four parts is divided into chapters, almost all of which consist of one battle. Before the fighting begins, players can choose units, reposition them, equip weapons, and choose which skills the participating characters will use. Everyone must be chosen with care because one of the trademarks of the Fire Emblem series is that any character that falls in battle is gone for the rest of the game. Though there is often strength in numbers, weaker characters can be more of a hindrance than a help. This and the fact that it is not uncommon for units to be killed in one or two hits creates a little bit of realism and a whole lot of difficulty.

As for the battles themselves, they are completely turn based. After one side has finished all of its moves, the next group, usually the enemy force, will take their turn. When two units bump into one another, the game switches to a combat screen where the two pair off and exchange blows. Fortunately, the results aren’t completely random. Prior to initiating the fight, a window will display the strength of the chosen attack, the hit percentage, and the chance of landing a critical hit for both units. This allows you pick your battles to, hopefully, ensure that everyone comes out alive. Despite being able to see what your attacks will look like, any miscalculation in the enemy’s range can be deadly. This will likely result in many, many restarts. Mercifully, one of the new additions to Radiant Dawn is the ability to make a battle save at any time if using the easy or normal settings. 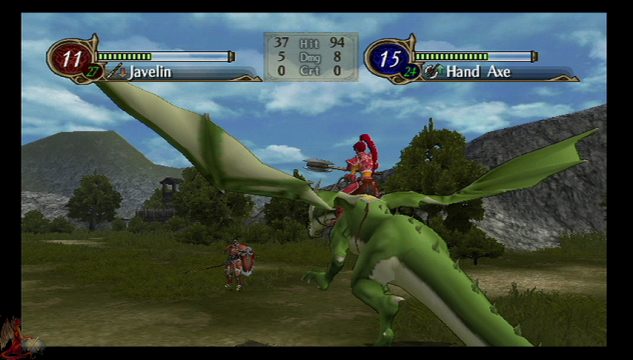 I know you’re about to die, but I have good news! I just saved a bundle on my wyvern insurance.

Speaking of difficulty settings, there are three of them, and they range from mildly challenging to all but impossible. The easiest setting reduces the number enemies, increases experience gained, and prompts the player for very useful tutorials. Experienced players will not need the tutorials, but the difficulty ramps up significantly in normal. It is very easy, for instance, to get to the game’s final chapter only to discover that it is not winnable with the current team. In most games, this would not be a problem, but it is impossible to go backwards. Anything missed will be forever impossible to get later. This is especially true of the treasures hidden on the map. Many important items can be found by putting someone on a specific square, but the game does not tell you what is hidden nor where it can be found. Similarly, the game doesn’t tell you the importance of certain skills that are all but necessary to win the final boss battles. Though it wouldn’t seem like it at first glance, a guide is pretty strongly recommended to keep from missing important items and recruitable characters.

When it comes to characters, Radiant Dawn does not disappoint. There are nearly fifty distinct playable characters that join the cast, and they fall under two basic races. The first are the beorc. They are regular humans that fight with weapons like swords, axes, and lances. Initially, the human characters are relatively unimpressive, but every twenty levels, they experience class changes that give them extremely powerful skills and increase the caps on their stats.

The second race is the shape-shifting laguz. Though they lack the class changes of the beorc, they make up for it by transforming into powerful animal forms. There are many clans of laguz ranging from animals such as wolves, lions, hawks, and even dragons. While transformed, they receive a twofold stat increase for everything except luck and total hit points, but they cannot stay transformed forever. Each laguz has a transformation bar that fills while in human form and depletes while shifted into its animal form. There are, however, a few royal laguz that can stay shifted for entire battles. Also, unlike their human counterparts, they do not need weapons; their teeth, claws, and talons more than suffice and never wear out or need replacing.

Another new addition to the formula is the way bonus experience is handled. Participation in battle is not the only way to level this time. Finishing chapters quickly or meeting certain requirements nets bonus experience points that can be awarded at any time. They can help bring weaker characters up to speed, and since levels gained from bonus experience always result in stat growth in three areas, it can be strategic as well.

Considering this game is on the Wii, the graphics are a bit of a letdown. Almost everything looks like it came directly from Path of Radiance on the GameCube. Visually, the saving grace are the fully animated cut scenes that occur somewhat frequently. In a word, they are gorgeous, but those using HDTVs will wish that Nintendo had opted for high definition support. On a 1080p screen, they can look a little pixilated. Aside from that, the close-up battle screens look good, but most people will probably opt to have all fights take place on the map. It’s nowhere nearly as pretty, but it’s much faster that way, and for all intents and purposes, you don’t miss that much. 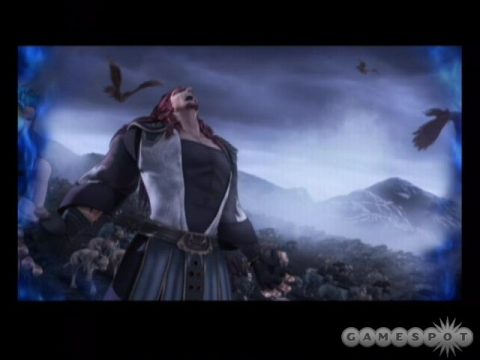 The one place that the game really excels is aurally. Fire Emblem games are known for their beautiful soundtracks, and this is no exception. Despite the fact that you will be hearing some songs throughout the entire game, they never seem to get old and are a joy to listen to. The sound effects are nothing spectacular, but they get the job done. This game also features a fair bit of voice acting, though most of it consists of a narrator reading the lengthy amount of plot between chapters, a first for the series.

Overall, the plot is pretty good and gets continually better as the game progresses. At first, it appears to be your run of the mill band of heroes save the world from an evil empire game, but Radiant Dawn is not without its twists and turns. There are also extra conversations that can be viewed between chapters that expand the plot by giving backstory and providing the party with much needed money and items. There are also conversations on the battlefield, both between comrades and foes. Bosses will often shout how they are unbeatable shortly before being slain, and the message will change depending on which character attacks them.

Anyone wishing to finish this game had better set aside at least a good 50-60 hours. It can be finished in as few as 40 hours, but when you add in the frequent restarts, it can stretch on nearly endlessly. Though it can get a little frustrating to have to restart so many times, it really makes you want to finish the battle without losing anyone, and when you do, it feels so great that it is more than worth all the effort.

One other point that deserves mentioning is that there are a variety of control options available. The game will natively recognize the Wii remote, classic controller, or even a GameCube controller. Of the three, the GameCube controller seems the best fit, especially since this is likely the first game to not offer much in the way of Wii-specific functionality. You can also import clear data from Path of Radiance, and returning units from that game will have a boost in experience and weapon levels.

In the end, Fire Emblem: Radiant Dawn is not for everyone. Those that do not like tactical RPGs need not apply. The difficulty will turn off a few more from that group, but for those that are left, this game is a blast from start to finish. There are a couple flaws that hit inexperienced players the hardest, but the good far outweighs the bad. Fans of the series have probably already picked this game up, but the easy difficulty makes it accessible to a newer audience as well.