If Fire Emblem: Awakening hadn’t sold so many copies, it would have been the end of the series. Intelligent Systems saw its efforts rewarded by the marketplace though, and the follow-up to Awakening tosses in even more alterations to the series. Fire Emblem Fates: Birthright is but one part of the complicated Fire Emblem Fates release structure, and by itself a few things don’t fully work. It is nevertheless a worthy entry in this lengthy franchise and assuredly worth experiencing by tactical veterans.

All Fire Emblem Fates versions begin with the protagonist, whose default name is Corrin, becoming acquainted with his or her siblings in the royal family of Nohr. This occurs after the entirety of Corrin’s remembered life has been spent in an isolated fortress, and is immediately followed by King Garon of Nohr tasking his child with investigating the neighboring nation of Hoshido. The investigation goes awry, and Corrin gets to meet his or her birth siblings among the Hoshidan royalty. Birthright forces events along the path of Corrin reuniting with Hoshido and seeking to make the world a better place via the quick subjugation of Nohr to force peace, a job that proves more difficult than initially expected.

As a stand-alone title, Birthright combines excellent tactical combat, an uneven relationship simulation, and an uninspiring good-vs-evil story. The large number of recruitable characters are two-dimensional, but there are enough of them it’s rewarding to personalize a squad with complementory personalities and combat specialties. Like the first two paragraphs of this review, Birthright and Conquest are connected at the core to a larger narrative. While Conquest is a more fulfilling tactical experience, Birthright is an excellent companion and introduction to the unforgiving system.

The Fire Emblem experience is about turn-based combat, and Birthright is no exception. Battles are complicated affairs that can be solved with careful attention to terrain effects, defensive emplacements, and battlefield-altering Dragon Vein effects. Each weapon type has advantage over two others, including the new-to-the-series shuriken, which actually manage to make status ailments worthwhile. Enemy forces receive frequent reinforcements, and sloppy tactics are a quick invitation to restart the battle. Changeable difficulty levels allow players to decide if they want permadeath, the classic Fire Emblem badge of honor, or a more leisurely experience. Even without permadeath, Birthright‘s battles offer more challenge than many tactical RPGs. Victories rarely feel predetermined: they’re the result of long-term army building and on-the-spot decisions. Unlike Conquest, however, it is possible to grind for gold and experience points in random encounters between story battles. This option allows for more casual play, allowing for more experimentation with character builds and relationships without having to reset. 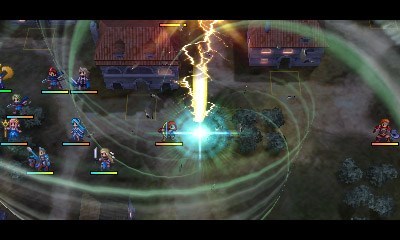 Royals can call on Dragon Veins to turn a fight around.

One of the keys to success in battle is the support system. Characters who fight next to each other build bonds, which can be explored in conversations at the home castle. These conversations contain the bulk of the characterization, giving each character several scenarios in which to develop their quirks and emotions. Characters with high support levels provide greater advantages to one another when paired in combat. Fielding an entire force of boon companions provides flexibility, but requires careful management. When two characters reach S-Rank, they profess their love for one another and have a battle-ready battle child. This system of child-rearing is simultaneously compelling and incredibly ridiculous.

Parents fighting alongside their children was such a popular feature in Awakening that its return was inevitable in Fates; however, as mechanically fruitful as it is, its narrative logic is grade-A guff. On the plus side, playing matchmaker is another way to personalize each playthrough, revealing different aspects of each character. Moreover, the parents pass certain qualities on to their children. While RPGamer cannot condone eugenics or the creation of statistically superior super-soldiers, doing so in Birthright is an enjoyable puzzle. Is there a way to optimize the children for each couple in a way that’s mechanically optimal while staying true to the personalities and romantic inclinations of the parents? Regardless of the efforts, the way the fruits of these unions is delivered makes the classic stork-and-cabbage routine sound rational. Each couple’s child (or in rare cases, children) can be recruited immediately after hitting S-Rank. This aging discrepancy is explained through the use of parallel dimensions, where children are raised safe from the ravages of the Nohr-Hoshido conflict. This can lead to children who are older than their parents. Worse, all parent-child interaction is shunted into support conversations. Although these conversations mention the parents visiting their time-dilated children over the years, the story doesn’t always allow for these contrivances.

Like the Pokémon games, Birthright doesn’t seem to be aiming for an internally consistent world. Instead, it piles on the gameplay elements surrounding an enjoyable core to create a delighful hodge podge. In both examples, this means focusing on the special team, whether it be Pokémon or the army of Hoshido. It doesn’t really matter that the size of the player’s army vacillates between being an elite commando unit and a large force of rank-and-file soldiers. The only characters that matter are each player’s command of special dudes and ladies, and the only story that matters is the one created by emotional pairings and the personal dialog. Balancing unit specialties to cover offense, defense, healing, mobility, weapon skills, and a host of related considerations appeal to the analytic part of the brain, while keying these abilities to specific allies scratches the collector’s itch. Like the focus on army development, Corrin’s cross-dimensional, personalized castle never really meshes with the rest of the story, but it’s plenty of fun to build up and defend from invaders. The castle can hold different buildings, each of which provide different benefits for when the spells and the arrows start flying. 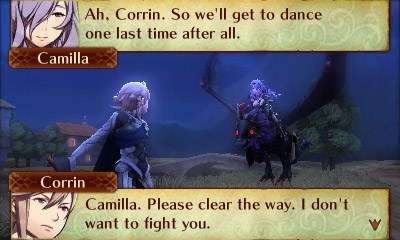 Allies in one game are foes in the next.

Internet wags have made much of the quality of Treehouse’s localization. Detractors argue the English script is too silly and erases political nuance. More level-headed, handsome reviewers appreciate the majority of the jokes. Lighthearted moments are tonally appropriate in a game with so many gag weapons (e.g. stale bread, brooms, dumplings), goofy anime tropes, and an otherwise by-the-numbers plot. Surprise reveals are foreshadowed so heavily that any mystery surrounding them is comically dense. This isn’t to suggest Birthright is a laugh-a-minute spectacle, but it’s refreshing when its snickers are intentional.

Birthright looks and sounds like Awakening, but better. The rousing music is a mix of medieval Japanese instrumentation and Western elements more common to the series. Nohr and Hoshido’s musical themes and ornate costumes give each country a sense of unity, using real-world cultural cues to add texture to the war. Character voices and art suit their owners, making it easy to have favorites. The only area where the presentation falls short is during story scenes where characters only say short text snippets. While it’s a common technique to add spark to a scene without voicing the entire game, it nevertheless comes off as discordant. Thankfully, the overall presentation is harmonious and conducive to the central goal of marching tiny warriors across the battlefield.

Ultimately, Birthright is an excellent tactical game with a lackluster story. It’s an engaging stand-alone experience, but reaches its true potential as a lead-in to Conquest. Its gentler challenges and direct combat objectives ramp up nicely into Conquest‘s greater difficulty and more varied battles. Birthright is a great place to start Corrin’s journey: like its protagonist, the game is welcoming. Fates has a lot of moving parts, so the beginning is a good place to start.