A Tale of Two Eras

Back in the days of the NES, some series weren’t content with playing it safe. Castlevania II: Simon’s Quest, Zelda II: The Adventure of Link, Teenage Mutant Ninja Turtles 2: The Arcade Game and Super Mario Bros. 2 veered significantly from their predecessors, and are often regarded as the black sheep of their franchises. Fire Emblem, despite not being released outside Japan for many years, did something similar with its second entry. Now that Fire Emblem Echoes: Shadows of Valentia is available to the English-speaking world, many more can experience a title that shakes things up more than any other in the series.

This tale takes place on the continent of Valentia, split in half between the fiefdoms of its unfriendly deities Duma and Mila. It begins with a prologue in which the leads, Alm and Celica, meet as children in Ram village. They don’t get to stay together long before Celica is hurriedly moved elsewhere, and the narrative picks up seven years later when Alm joins the Deliverance. This organization is fighting against the invasion of their land by troops from the north, and Alm seeks to drive back the incursion. Subsequently Celica is compelled to leave her island retreat due to the absence of Mila’s voice, which has heretofore served to guide the people.

Considering this is based on a 1992 Famicom title, the surprising amount of narrative it delivers is impressive. Celica and Alm aren’t among the most multifaceted characters ever to be portrayed, but they’re generally likable and get plenty of time to make their personalities known to the player. The compatriots who join them are similarly granted some time to become known, especially if the player attempts to seek them out for optional conversations outside battle. Several antagonists are also presented as more than uncomplicated practitioners of evil, though more of them are given nothing but a couple of lines in combat before slaughter. Echoes also does an impressive job of making the climax take on genuine urgency and interest. Its one narrative misstep comes when Celica and Alm see each other for the first time in seven years — after a two minute conversation, these supposedly inseparable mates are unamicably divided. This was necessary to keep the two parties separate, but rings false when it occurs.

Fire Emblem Echoes looks similar to other games in the series at first glance. It features tactical turn-based combat on a number of battlegrounds, with the AI being dangerous if given a chance. A world map which the player can move about freely is less common in the series, but not unprecedented. In keeping with the previous 3DS Fire Emblem titles, permanent character death can be turned off at the beginning of the game. Doing so for a first play of the game can be quite helpful, because of the relatively small number of playable characters who join Alm and Celica — when the whole team is normally deployed for a fight, losing any member is dangerous. Major battles remain as addictive as usual for this series, but additional alterations to the mechanics of Echoes mark it as a distinctive entry. 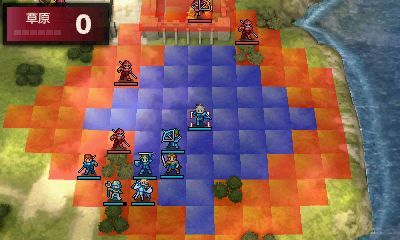 All this red and blue, but not one Revolutionary War acknowledgment.

Wandering through dungeons is a definite break from Fire Emblem mainstays, especially as it involves enemy groups that will seek out the player. These adversaries reappear when the player reenters an area, but fights with them veer from the usual series methodology. Not only are the sets of antagonists limited, so that the same ones will be seen repeatedly, but the battlegrounds within dungeons are small and not very interesting. Cutting grass and smashing obstacles with the current lead to find money and items is certainly unusual for this series, and may have served as Intelligent Systems getting warmed up for Fire Emblem Warriors. The task can start to become monotonous after incessant repetition though. Wandering into towns also happens in this title, as the player moves between several screens depicting areas of the settlement from a first-person perspective. These places act almost like an adventure game, giving the player time to examine the environment for items to snatch.

A major change from other games is that characters can hold but a single item. Characters wield weapons and magic by default, but replacing the generic weapons with something else greatly increases attack potency. The major problem with this inventory aspect is that it leads to having no freedom over what will be the means of counterattacking enemies, in case several equipment options with differing range and accuracy are available. There is a finite amount of equipment to be found in the game as well, leaving upgrades to be accomplished by enhancing what already exists at the few smithies in the game. Mages learn and know spells innately but will always counterattack with the first one learned, even if an alternative would be appreciated. Since mages consume their own HP to use spells, defaulting to the least enervating option at least makes some sense. All of this is unusual for the series but not inherently bad, and serves to make it unlike anything else series veterans have experienced.

Certain older Fire Emblem titles were brutally difficult, but Echoes has a few aspects that just seem sadistic. The most common problem comes from unfriendly witches, which possess the unnerving and unfair ability to teleport anywhere on the map while still being able to move and attack. This can make a mockery of any attempt at the usual tactics against magic users, since they can pop up anywhere to ruin a formation. Terrain hazards that don’t affect the enemy but do harm the player are also unpleasant, as are maps with summoners creating endless hordes of weak adversaries that can nevertheless clog the landscape very effectively. Most enemy magic users have to obey the same rules as the player’s mages, except for a few with nasty abilities that let them cast without losing any HP. Enemy parties will also appear on the map and move toward both player parties, and if the foes initiate the action they get to take the first turn without any player input.

There are some other changes to the usual combat methodology, such as attacks automatically doing one damage instead of nothing when they strike an opponent with high defense, and archers not being helpless at melee range. Intelligent Systems added a means of helping to cope with all of this through Mila’s Turnwheel, which rewinds actions in battle. Its abilities can help save characters, but are limited because the time rewind is for individual actions, not entire turns. If a character is killed early in the enemy phase and multiple adversaries subsequently walk toward the player, rewinding those movements will not fix the problem. The game’s difficulty increases as it continues, and the last two major battles take place after a point of no return so that there is no more equipment alteration to be done. This is doubtless why the ability to grind inside dungeons exists. Tackling the core game will take less than forty hours, but odds are good that wandering around will add a lot more time. 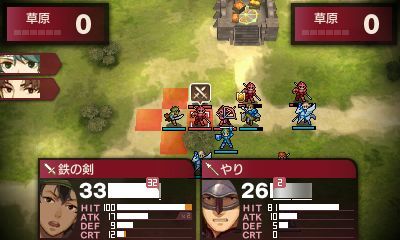 Okay, who would make a dismayed expression when the ratio of upcoming damage is that skewed in his favor?

Echoes does what has never been done in the Fire Emblem series by having comprehensive voice acting. Aside from a few NPCs that pose questions the player must answer for quests, every line is spoken in story sequences and optional interactions. Characters also have a pretty good assortment of lines to be uttered during combat, and while repeats will definitely be heard, enough substance is provided to avoid egregious duplication. The quality of the performances is mostly strong, but the choice of Nintendo’s localization team to use a number of somewhat formal turns of phrase doesn’t quite fit with the contemporary speech patterns of the cast. Barring this oddity, the voices definitely enhance the experience.

Many of the compositions used date back to the original incarnation of this game, but the instrumental accompaniment by numerous musicians is something the NES could never have accomplished. Plenty of new tunes are also in evidence, and their composition quality is similarly strong. Instead of the style used in Awakening and Fates where the compositions would add instrumentation and intensity during combat animations before quieting again, most battles here have a quick attack theme that interrupts the usual melody. This style makes the few battles near the end that do not insert a short tune for combat animations all the more effective. Echoes is meanwhile a slightly enhanced visual showcase from the preceding 3DS entries, showing off a few FMV sequences also. These images don’t push the 3DS hardware to its zenith but are very pleasant to behold.

Fire Emblem Echoes provoked a multitude of emotions from me, not all of them positive. It’s different than anything else in the series, and shows what happens when a developer feels like veering away from the established path. It’s to the game’s credit that I found it quite addictive and sank a lot of hours into it, plus much of what takes place is genuinely interesting. Yet some of the nasty tricks it pulls in the last battles were just infuriating. A somewhat mixed bag, but absolutely worth investigating by series stalwarts.