The Legend of Zelda: Link’s Awakening Remake Releases in September

Link’s Awakening‘s remake offers a reimagined version of Koholint Island and includes Super Mario enemies like Goombas, Chain Chomps, and Piranha Plants. The game also adds the new Chamber Dungeons for which players can obtain Chambers (dungeon rooms) and arrange them to complete objectives. In addition to receiving a new trailer and screenshots, the game also appeared during the Nintendo Treehouse broadcast from E3. The hosts and series producer Eiji Aonuma showed off the location of Mabe Village, a notable dungeon, and checked out the new Chamber Dungeons.

Nintendo revealed that it will be releasing a new Link amiibo figure based on the game’s art style. A special Dreamer Edition will be released in North America that includes the Dream Art Book featuring concept art from the remake, while Europe will receive a limited edition that includes a 120-page art book and a Game Boy-design SteelBook. 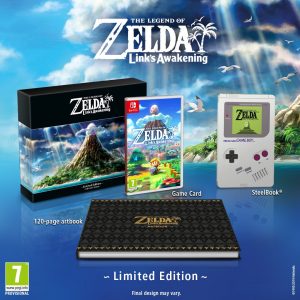