Final Fantasy XIV has had a long, rough road. After its initial, rushed launch in 2010, it was widely regarded as one of the biggest MMO failures in recent memory, even managing to snag RPGamer’s coveted “Biggest Letdown” award. After stagnating in limbo for three years, however, it came back with a vengeance as Final Fantasy XIV: A Realm Reborn. A ground-up rebuild of the original version, A Realm Reborn not only revived the beleaguered MMO, but in many people’s eyes the Final Fantasy franchise as a whole. Now, two years later and nearly five years since its initial, troubled beginnings, the game’s first full-length expansion has arrived: Final Fantasy XIV: Heavensward.

Much like A Realm Reborn, Heavensward is a highly story-driven experience. At this point, the ongoing saga of Eorzea and the Warrior of Light is incredibly lengthy; between the original story of A Realm Reborn and the subsequent, serialized stories of patches 2.1 to 2.55, the story is long and complex. Heavensward begins in the aftermath of patch 2.55 and sees the Warrior of Light and his allies seeking refuge in the xenophobic, religiously orthodox city of Ishgard in the frozen land of Coerthas. The ongoing tale finally brings the Ul’dahn political conspiracy to a close, while further exploring the war between Ishgard and the dragons. And of course there are new primals that need slaying and new Ascians making a mess of the world. It’s difficult to say much more than that without venturing into spoiler territory, but suffice it to say that fans of the serialized patch storyline will have plenty to look forward to.

One of the best aspects of the story is that the NPCs involved all play a much more involved role in the events. Rather than leaving things entirely to the Warrior of Light, characters such as Alphinaud, Raubahn, and Yugiri take a more direct role in the story. Single player story trials return with a vengeance throughout Heavensward, and in a number of them, these characters actually fight alongside the Warrior of Light as a party. It makes all of them much more memorable.

Unfortunately, a major downside to Heavensward‘s story driven design is that virtually every aspect of the expansion’s content, from its new jobs to its new zones, is locked behind a story wall. Until players complete the serialized storyline up to and including patch 2.55, Heavensward‘s content is completely inaccessible. While this makes sense from a storytelling perspective, new and returning players may find this wall to be rather frustrating. Thankfully, Square Enix has made a number of adjustments to make this content easier to experience, including providing higher level gear as quest rewards. Once you reach Ishgard, however, everything opens up and the experience is fantastic. 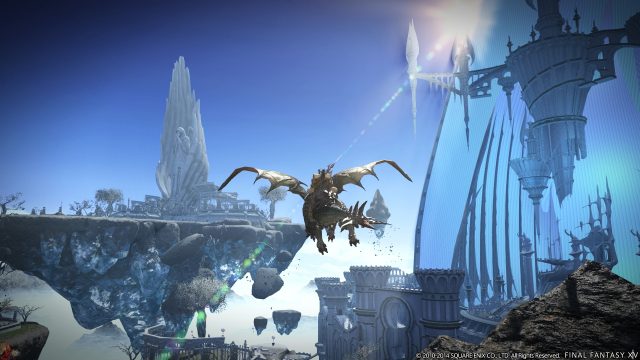 Sprawling, three-dimensional zones are a major feature of Heavensward.

From the moment you step foot in the two new starting zones, West Coerthas and the Sea of Clouds, the sheer scale of Heavensward becomes apparent. Even the smallest of the new zones absolutely dwarfs the largest of A Realm Reborn. Not only that, but the zones themselves are sprawling and far more open to exploration. There are no more narrow corridors or closed off areas; instead, every zone is wide open from north to south and east to west. To facilitate traveling across these far larger areas, Heavensward introduces the ability to fly, though it’s an ability that has to be earned. Every new zone players visit feature a number of Aether Currents located across the map that players must visit, along with some that can only be discovered via side or story quests, before flying in an area becomes available. Once it is, new, previously unreachable areas open up, along with the ability to travel across the zone at a much more rapid and direct pace.

Flying also means that the zones have a much more three-dimensional design than the old world. There are huge towers to scale, cliffs and chasms to navigate, and a number of other neat design ideas that lend themselves to a three-dimensional view of the land. It also leads to some spectacular vistas that are simply stunning to behold. Of course, there’s a drab side to the visuals as well. With enough height and distance, texture repetition becomes easily discernible, breaking any illusion that Eorzea is anything but virtual. Music also plays a much more prominent role throughout the game. Heavensward is loaded with terrific new tracks, and they play with much more frequency than in A Realm Reborn, particularly the theme music for each new zone.

The new dungeons have a much more traditional design, but Square Enix has clearly learned a lot from A Realm Reborn. The boss fights continue to be exceptional, even at earlier levels, and some of the new story battles are absolutely phenomenal. There are three new trials players will have to complete during the course of the story, and each of these is as unique as the primals that came before. 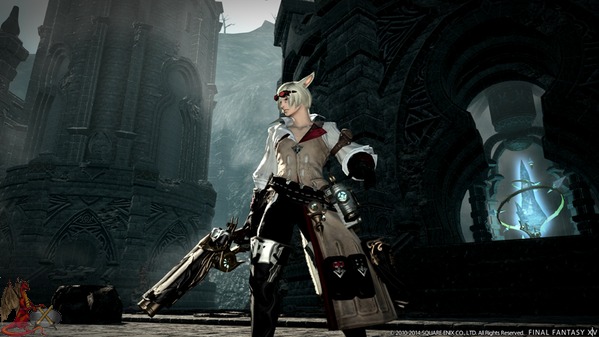 The Machinist is one of three new jobs joining the ranks of Eorzea’s finest.

Beyond the new zones, players will be happy to learn that every job has at least five new skills to play with, all of which are learned as players level up to the new cap of sixty. For some jobs, such as the Bard, these new skills fundamentally alter the way the class plays, while for others they simply offer up new options. Heavensward also offers up three brand new jobs for players to try out: the gun-slinging Machinist which plays similar to the Bard, with a few key differences, the card-reading Astrologian, a healing class that specializes in short-term buffs, and the greatsword-wielding Dark Knight, a Final Fantasy staple that enters Eorzea as a new tanking class. All three of these jobs are locked to players who haven’t arrived in Ishgard via the main story, and all three begin at level thirty, meaning those interested in trying them out won’t need to grind out the early levels. Even crafting and gathering classes have new content to look forward to; the Fisher job, in particular, has received a number of major changes, including abilities that finally make use of GP.

Once players reach the end-game, things start to get a bit more bleak. Unfortunately, Heavensward‘s end-game content is currently lacking. Obviously this is going to change rather quickly; in fact, just one week ago patch 3.01 introduced Heavensward‘s first raid dungeon, Alexander. However, at the time of this writing, the aforementioned raid dungeon, three regular dungeons, and three trials make up the entirety of the level sixty content, and two of those are part of the main story. While future patches will certainly remedy this issue, current players may find the level sixty experience decidedly underwhelming. Thankfully, the journey from fifty to sixty is nearly as long as A Realm Reborn‘s original story, and the ride is well worth the price of admission. With three new classes to try out and gathering and crafting classes to level up on the side, most players should find plenty to occupy them until the next set of content releases. There are a number of other new features as well, including a new player race and the ability for free companies to create their own airship, but it would take too long to go into everything.

Final Fantasy XIV: A Realm Reborn will probably go down in history as one of the greatest comeback successes in video game history, so it’s great to see it followed up with such an ambitious and exciting first expansion. Final Fantasy XIV: Heavensward has a few problems, but these are almost all localized at its beginning and end. Once players start digging into the content, the experience is phenomenal. The jury is still out on the end-game and where the game goes from here, but the journey to get there is something Final Fantasy fans definitely don’t want to miss.