It has been well over a decade since the release of what many look upon as the PlayStation game that brought Japanese RPGs into the mainstream. Final Fantasy VII has spawned a legion of fans, fan fiction, fan art, spin-offs, side stories, and has left many a gamer dreaming, no, praying, for a remake. Unfortunately for those people, the remake is not here, but what RPGamers do have is a chance to play Final Fantasy VII again in all its original glory on the PlayStation Portable via the PlayStation Network. How does the game hold up all these years later? Is it still as grand and glorious as it was in 1997? Was it ever really as good as it seemed back then?

The story of Cloud and his crew, which sees them venturing out to prevent Shinra Corporation from ruining the planet and to stop the menace Sephiroth from destroying world as well, is filled with great ideas, but many are poorly executed. The plot never really knows which direction it wants to take. Is the game about saving the world from an evil corporation or about saving the world in general? Well, it’s a little of both, though players might have a hard time figuring out why to care due to the game’s horrible localization. Poorly translated dialogue causes a general sense of confusion at many points throughout the game. While the gist of the story is clear enough, many of the finer points were lost in translation. That aside, the characters, both heroes and villains, are a diverse crowd that receive a decent amount of screen time. While most merely fill a cookie cutter role, right down to Cloud having amnesia and acting borderline schizophrenic and Tifa being hopelessly in love with him, they at least get a chance to shine in said role. 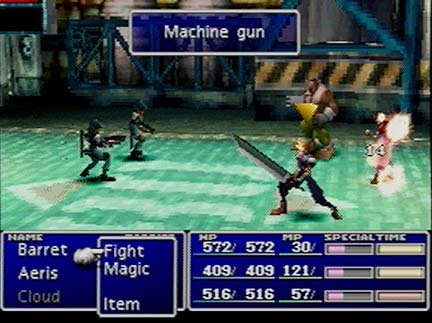 The original man with the machine gun.

Another area where the game is hit or miss is the combat system. Battles are active time affairs with a strong focus around the use of materia to augment characters. Some might love that characters are basically blank slates who can equip whatever skills and spells they want, but it ends up leaving the characters feeling bland and uninspired. The only noticeable difference between the characters lies in their limit breaks, powerful abilities that become available when a character has taken enough damage. Also of note are the highly glorified summon spells. These creatures cost a lot of MP to call upon, but are some of the most powerful attacks in the game, making an easy game much simpler. While these spells look amazing, they do take a little too long for repeated viewings. Taking all of these aspects into consideration, it’s up to the player to create a team that is varied in more than just cosmetic details, because other than limit breaks, the game doesn’t help.

If there is one thing to point out as a major annoyance of Final Fantasy VII, it would be the interface. From exploring the world to menu navigation, there are constant problems. The basic overworld area, first revealed a few hours into the game, is simple enough, but traversing around other maps can be an absolute pain. The 3D environments are awkward to navigate, making it difficult to figure out where to go next or what path goes where, especially when the camera zooms far away from the character. Menu navigation works adequately, though not everything is completely transparent. One problematic example is that changing around materia at first seems like a chore, having to unequip, reequip, and organize everything by hand, but once you find the management menu for materia, things become much easier. It’s just not obvious where the materia menu actually is. It’s a minor complaint when compared to the other issues, but is yet another issue of things not being as smoothly designed as other RPGs before and after.

The only thing in Final Fantasy VII more schizophrenic than its main character is its graphical presentation. There are three distinct visual styles at work here. First is the basic in-game polygonal graphics used on the world map and for characters. These blocky characters are what players will spend most of their time looking at, but thankfully some of the background environments are beautiful to view, just hard to navigate. The visuals for battles are very similar to those on the world map, but these appear more polished. In combat, characters are better animated and look crisper, making this mode more pleasant to view. The last style is that of the game’s very infrequent cutscenes. These CG scenes are beautiful and the characters look just like their design artwork, but so rarely are these scenes seen that they look out of place. The graphical style is not cohesive at all, much to the game’s detriment. 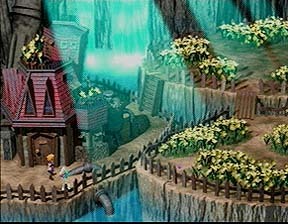 Beauty within a mess.

In case it seems like everything about Final Fantasy VII is rough, there is one area where the game really shines and that’s the soundtrack. There are classic pieces such as “Aerith’s Theme” and “One-Winged Angel,” of course, but there are many more tracks that fit into the game’s setting wonderfully. The themes with a modern feel that play while in Midgar, such as “Under the Rotting Pizza,” fit in, as well as the eerily haunting “Those Chosen by the Planet.” The soundtrack is memorable, emotional, and varied enough that it never gets old, but most importantly it fits with the game’s setting at all points throughout. The fact that it’s a joy to listen to outside of the game is just a bonus.

Final Fantasy VII is a decent game, but more importantly it has been a very influential RPG. By the time I first played Final Fantasy VII, I had been playing RPGs for years, but that was not the case for many RPGamers. For legions, this was the RPG that started it all, and for that the game should be commended. I can even remember picking this up at launch, taking it home and playing until the next morning. However, upon removing my rose-tinted glasses, I can easily see all the flaws that were so hidden to me those many years ago. It’s no wonder that fans are screaming for a remake; this one could be great with a little polish.