What is it about a successful title that leads the best and worst of us to perform much less admirably the second time around? Sequels, whatever the genre, often have a difficult time living up to their predecessors, and gaming is no exception to that particular phenomenon. Square is no stranger to churning out mediocrity in the name of devaluing brand appeal, and it seems the roots of this tendency are firmly planted in the company’s NES offerings. On the heels of Final Fantasy, quite possibly one of the best titles released for Nintendo’s ugly grey cube of faulty performance, Final Fantasy II comes across as a little rushed, a little uninventive, and not nearly as strong on the gameplay side as its predecessor.

At least it has actual characters, though. The game begins with a frenetic chase scene as the main characters Firion (or Frionel), Maria, and Gus, as well as the enigmatic and soon-to-be erstwhile Leon get run out of town by some evil imperial knights. In a foretaste of things to come, these knights quickly deal copious death to the heroes, who wake up dazed in rebel headquarters down in Altair. There, they find the resident seneschal highly skeptical of their abilities and the princess in need of some assistance. Fortunately, she saves getting kidnapped for later, but there’s enough to do that soon enough, players are sucked into the events of the game, which seem to alternate between fetch quests and… more fetch quests. Yes, Final Fantasy II takes finding things in one place and bringing them to another to unfortunate extremes, and while the plot does manage to dance back and forth, it does so by coming up with new and exciting excuses to run helter-skelter across the game world in search of various trinkets, which gets terribly old terribly fast.

This is largely because during the course of these glorified drug runs, there’s a whole lot of fighting that’s a whole lot of similar. Evidently, Square got tired of levels, because Final Fantasy II builds characters slowly, combining Chrono Cross sluggish stat builds with Secret of Mana hammer-on-crap-repeatedly level building for spells and weapons. The weapon statistics seem to govern how many hits a player gets in with a given weapon, while the magic stats improve damage with each successive level. This is the biggest flaw with the battle system; statistical increases seem entirely arbitrary both in practice and in being obtained, and magic (especially low-level spells) is rendered basically useless because it doesn’t do enough damage most of the time. It’s also possible to increase statistics by attacking yourself, and sometimes, as in Final Fantasy X, it becomes necessary to keep monsters alive just so spells and abilities receive the proper leveling attention needed to give characters a chance to survive dungeons. This, needless to say, grows rather grating when the battle theme is only thirty seconds in length.

Still, that isn’t to say the battle theme was bad. Nor was the rest of the music, save for the dungeon theme, which was unfortunately used rather liberally. It was just a little too brassy, and it seems that not as much effort went into the music of Final Fantasy II as was put into that of its predecessor. Most of the tracks are reasonable, relatively speaking, but at the same time, the fact that there was less variety than could be found in Final Fantasy was a bit of a letdown.

At least there were some marginal improvements in interface between Final Fantasy and Final Fantasy II. Gone are the separate screens for weapons, items and armour. In their place? A unified inventory with a strange limit of 63 items. Whether this number has any special significance or not, it becomes fairly troublesome towards the end of the game when key items start to pile up and steal precious spaces that could be better used storing curative or status-repairing items (which is a problem only because items can’t stack, a feature whose disappearance is most mysterious, considering it was implemented in Final Fantasy).

There is more lateral progression in regards to the game’s graphics. Be it the original version or either of the WSC or PSX remakes, Square took no pains to differentiate between its titles in this regard. If anything, the character design in Final Fantasy II is slightly worse than its predecessor; monsters have a rather otherworldly appearance to them, much the way things were different between The Legend of Zelda and Zelda II: The Adventure of Link. This is not to say the game was ugly, because it wasn’t; it just didn’t represent an improvement over Final Fantasy.

Tails are for sissies

If there’s one area where Final Fantasy II does unquestionably outdo its predecessor, it is in its difficulty. Battles don’t tend to be terribly difficult in some areas, but step on the wrong tile and piff, you’re dead. From start to finish, there are ridiculously overpowered enemies lurking in ridiculously illogical locations, and Square just didn’t do a very good job in ratcheting up the difficulty level as the game progresses. There should be a gradual rise from weak to strong, not periodic intervals where it’s impossible to progress because an overpowered monster keeps kicking ass it should never be in a position to. This extends all the way to the game’s end; the game’s final boss is exponentially more difficult to defeat than any of the monsters found in the final dungeon. This is basically the only reason to do any leveling, which of course means that some players will have neglected this aspect of the game upon arriving at the end and will discover quickly that they are doomed. This is an unfortunate discovery to be making in a game that does not allow saving in dungeons, and so while an average playthrough of Final Fantasy II can suck up 20 to 35 hours, it will also have a bonus five or six hours of time not added onto the official clock.

This is monumentally long for a NES title, and it’s a good thing it is, because there’s precious little reason to play through Final Fantasy II a second time. While characters can be customized to a degree, the weak basis for statistical upgrade does not make this an enticing option, and there are no branching plotlines to recommend. There quite simply isn’t much motivation to go through this title a second time, which is uncharacteristic of NES titles, to say the least.

One has to wonder where the translation for Final Fantasy II came from. Various fan translations have been kicking around the internet for years, and while it is tempting to suggest that Square scooped one of these, it is probably not the case. There is a certain attention to detail paid to the translation, which is weak, but passable. There are numerous grammatical errors, and dialogue is not particularly well-constructed. That said, the game’s basic story is conveyed reasonably, which is something, at least. 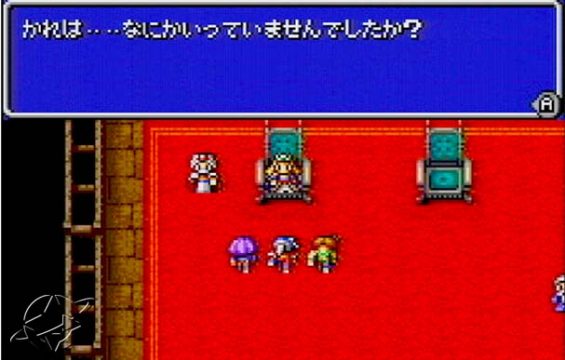 Pardon me… do you have any gray poupon?

What it lacks in various other areas, Final Fantasy II goes a long way towards making up for in the thought that went into the game. Featuring a number of novel elements, such as interchangeable party members, a battle system that, though faulty in execution, was novel in construction, and the use of identifiable characters, Final Fantasy II introduced a number of elements that would reappear in subsequent Final Fantasy titles. Indeed, it is possible to see the roots of a number of ideas, concepts, characters, and situations that would go on to repeat themselves throughout the series, if not directly then certainly by inspiration. It is with this game that Square truly began to develop the character of its series, and while it does so with mixed results here, Final Fantasy II‘s real value is in its basis as a foundation for a number of important elements of future Final Fantasy titles.

A game should be more than a stepping off point for other games, however, and in the end, Final Fantasy II‘s connection to later titles does not justify its weak gameplay. While it was not unbearable to play through the game, neither was it always enjoyable, and it dragged on just a little too long. Combined with mediocrity on virtually every other front, these elements make it unlikely that anyone will want to give this game more than a once-over. That said, that one time through is not a total waste of time.