When Final Fantasy Makes You Hit Yourself

Final Fantasy II is probably the most unique of the early Final Fantasy games. It was the first character-centered game in the series, featuring a whole cast of named playable and non-playable characters. The game’s character development system did away with levels in favor of a system that improved skills the more they were used. Now, Final Fantasy II comes to North America for the third time, with this PlayStation Portable version marking the first time it has not been part of a bundle. Generally overshadowed by the original Final Fantasy, how does the latest offering of Final Fantasy II do on its own?

It all starts with a small group of underdog rebels that are trying to stop the tyranny of an evil empire. The Emperor is a powerful magician and his second-in-command is a mysterious, powerful man clad in dark armor. All of this sounds a little too familiar, doesn’t it? Movie references aside, the plot is rather straightforward and simple. Firion, Maria, Guy, and Leon are four youths whose home is ravaged by the Empire. As they attempt to escape they are attacked and beaten; all but Leon are rescued by a small rebel group from the kingdom of Fynn. Firion and crew join the group and are soon working hard to defeat the Emperor and his evil army. Along the way, the main party is joined by a revolving fourth character that changes with the plot. The game features a handful of minor plot twists, and most of those are predictable. Nothing of the main storyline has changed much from either prior version of Final Fantasy II, so if you’ve played either of those, you won’t be in for much of a surprise. The PSP version’s localization is the same quality as the Dawn of Souls remake before it, so it is well-written, if not completely original. 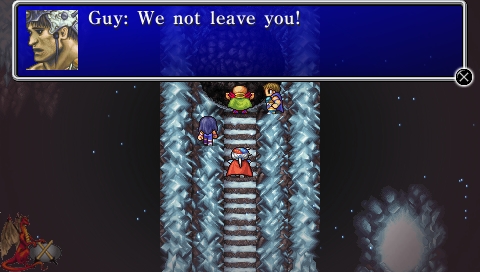 Poor Guy was a child left behind.

Combat is party-focused in Final Fantasy II, with three to four characters selecting turn-based actions during traditional random encounters. The path in which characters develop is extremely flexible since characters can equip any weapon, all armor, any spell, and can duel wield weapons right from the start. Along with all of that, Final Fantasy II is also quite unique in its character development system. This system allows characters to grow in HP, MP, and other stats through using them instead of gaining levels via experience points. For a better chance at HP gain, the character has to lose HP in combat, and the same goes for MP. A chance at an increase in strength comes from the process of attacking much the same as magic improves through usage. Magic spells can be made more powerful by leveling them up, a process that occurs as the spell is used more often. Customization is completely up to the user’s style of play, but with this freedom comes a price. The development system is easy to exploit. A player can engage low level enemies and then just start attacking their own team in an effort to improve skills. Each character can be whittled down to critical HP levels and drained in magic in order to raise those stats without really breaking a sweat. Due to the unbalanced nature of combat, this kind of self-leveling is almost required in the interest of time. It kills the realistic feel of battling monsters to hone each characters’ skill, but does allow for absolute freedom in character shaping.

Final Fantasy II‘s combat and character menus are the standard fare and are easy to navigate. Sorting items, equipping weapons, armor, and magic are all simple tasks. Players can save almost anywhere with the exception of areas that are new to the game. This title also features a word ask/learn system. In this setup, characters can learn key words and ask other characters about those words. This is often a requirement in certain places to progress the story. The system is rather awkward and doesn’t really add any strategic element to the game as you can only ask or learn from specific characters. It was almost as if the original developers were trying to create a system that made players feel like they were making decisions that impacted the game, but then abandoned the idea leaving as it now stands. 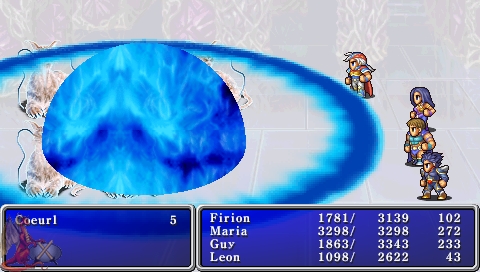 Combat is occasionally interrupted by Saturn crashing into the world.

In terms of originality, Final Fantasy II is very much like its PSP companion Final Fantasy that was released back in June. Both separate games are almost direct copies of their Dawn of Souls counterparts. Final Fantasy II even includes the Soul of Rebirth addition, a bonus quest at the end of the main storyline, that was first shown in the Game Boy Advance release. Thankfully, there is new content here in the form of new dungeons. Just calling these areas dungeons doesn’t really do them justice as they are more than just a series of caves or towers tacked on at the end of the game. The Arcane dungeons are accessible from near the very beginning of the game and actually give some real use to the word ask/learn system. Within these dungeons, players must use words that they’ve learned throughout the game to break seals and venture further into the dungeon. Areas vary depending on the words used, and once in there, players must solve puzzles to unlock new words that allow them to progress deeper. These areas are scalable and can be accessed even early in the game. Since the player will only have limited words available to use early on, the challenge of dungeon will be on par for where the player is according to the plot. Not only is this a unique setup, but the rewards are nicer in that new weapons are made available. Though it doesn’t help the overall originality of the game, it is a very nice bonus and much more unique and rewarding than Final Fantasy‘s time-based grindfest, the Labyrinth of Time.

Though still in 2D, this title is done in the same visual style as Final Fantasy PSP and is every bit as stunning. The art style is still top notch with character portraits being completely redone. Final Fantasy II also uses the CG cutscenes from the PlayStation remake found in the Final Fantasy Origins package. With the widescreen format of the PSP on its side, everything is scaled nicely to fit. Monsters are larger on screen than in any other prior version and are highly detailed. Spell animations are new and colorful, and area environments are also quite impressive in detail.

Music in Final Fantasy II is still classic Nobuo Uematsu. His pieces found in this title are likely some of his lesser known, but there are many that are still impressive to date. Battle music and boss music are quite catching pieces that really help to set the mood of battle. The theme of the rebel army is a very inspiring, patriotic piece. The entire soundtrack is very fitting for the varying moods of the game. Sound effects are mostly basic, only being used when needed such as in combat and not ever becoming obtrusive.

Though not a long game in terms of its main story, clocking in at between fifteen and twenty hours, the PSP version of Final Fantasy II does offer quite a bit of extended gameplay. With the Soul of Rebirth story and the new dungeons, this title could keep gamers busy for quite some time. With the insane ramp up in difficulty that enemies often take and the exploitable character development system, the game is quite unbalanced and will take newcomers some time to adapt. There is no experience point grinding in this game, but in the big picture that might really be a good thing. It at least helps to keep the game from getting stale.

So how did Final Fantasy II‘s first chance to stand on its own do? The result isn’t that bad. At its core, Final Fantasy II is still a port from a Game Boy Advance game, but unlike the last Final Fantasy, this one adds new stuff in the right places to help it feel fresher. Whether or not this one can stand up to comparably priced modern PSP RPGs is tough to say, but it does make more of an attempt to do so than just a contemporary visual makeover.