Come On and Let Me Know

Take some lush environments, add a charismatic villain, splash in a slew of activities, an excess of collectibles, and then disregard any narrative or tonal cohesion, and you get Far Cry 4 (the eighth game in the franchise), an open world shooter rpg hybrid from the Ubisoft game development hydra for every platform possible. The final result, setting aside some hiccups, is the most fun to play of the Far Cry series and the least frustrating title in the Ubisoft open world.

The story follows Ajay Ghale (pronounced according to the various voice actors’ whims), as he returns to his ancestral home of Kyrat only to discover his family has deep ties into the local civil war and is recruited into the revolution against Pagan Min’s mad tyranny. Explosions and side quests ensue. The entire story is bookended by the Clash’s Should I Stay or Should I Go? and it feels very spot on for the character of Ajay. There isn’t much reason for him to remain in Kyrat once the bullets start flying. Jason Brody in FC3 was so hopped up on drugs and revenge-ahol that all of his actions and either ending make a sort of sense for the character in the game. Ajay, on the other hand, just wanders around the mountainsides doing whatever anyone asks him to, be it running supplies for armed insurgents, psychedelic trips to the mythic past, or strapping on a GoPro and barrelling down a hill in an ATV. That’s not say that there isn’t any choice; the rebellion is split between an uber-conservative man of the people and an unethical progressive. The issue is that choice is purely on a player level, Ajay’s dialogue tends to boil down to “alright I’ll do that thing” – whether he’s seizing an opium shipment to fund the rebels or blowing it up because winners don’t use drugs. Even in the final confrontation when the player has the option to side with Min, Ghale remains practically mute as he sells out his allies and receives some serious backstory dramabombs. It’s frustrating to see all of the NPCs show off as much personality and motivation as they do only to meet with the blank wall of the protagonist.

The performances that make up the story are strong, the voice actors turn in some great work across the board. There are full performance capture sequences to lend fuller embodiment to these characters, but these sequences are few and far between. Which is a mixed blessing in that the bulk of the story moments happen over the main character’s cell phone while trying not to get eaten by bears, but it also means far fewer extended sequences where the game steals the camera and forces players into non-interactive cutscenes. The biggest question in terms of acting is, “Is the villain as good as Vaas from FC3?” Short answer, nope; longer answer: Troy Baker does an admirable job with Pagan Min and his narcissistic mood turns murderous on a dime madness, but he has fewer scenes than Michael Mando’s manic antagonist from the prior game. Mr. Baker continues his streak of awesome but there’s less meat to the character than he really deserves. 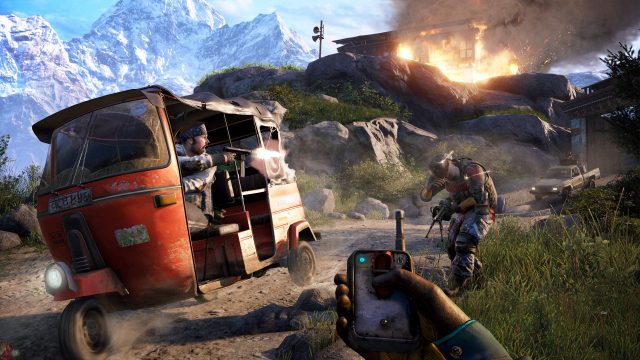 To fire, the cause of and solution to all of life’s problems.

Once players get into the action, they will discover a Ubisoft Open World Game™. Ajay will climb towers to reveal sections of the map, clear outposts to unlock missions, and collect oh some many things. But this is also the least worst example of this formula. It never locks players into repetitive busywork or unfair constraints with an arbitrary fail state — heck, there are only four (completely optional) tailing missions that if “failed” turn into nifty car chase missions. Most of what was good about Far Cry 3 is still present in this game. The gunplay remains tight and gratifying, running around the environment can be a joy, and setting fire to the scenery never loses its charm. Stealth elements seem to have improved with regard to enemy response. There’s a very clear escalation from idle, to investigative, through alarmed, to full of bullets and many ways to interrupt or circumvent these responses. Driving has improved, not by tightening up vehicle control but by the addition of ‘cruise control’. The game will drive the vehicle along the road to a waypoint or mission objective, leaving the player’s hands free for SMG drive-by shootings of royal army jeeps.

The missions in FC4 are not exactly varied, more like variations on a theme. The outpost clearing gameplay that was the highlight of the last two releases has been worked into hostage rescue missions, propaganda smashing, assassinations, and jewel theft. It is hard to argue against more of the same when that core is so entertaining. Another addition are ‘random encounters’ in the main game world. Ajay has the opportunity to help passersby, hijack arms shipments, and join skirmishes between the rebels and royal army. These are nice, brief diversions to fill out the ‘getting across the map’ portions of the game. A far less nice form of random encounter are eagles, new for this installment, which function as a screeching medpack tax that also grabs camera control away from the player as they watch helplessly through the bird’s attack animation before it buggers off never to be seen again. The NPCs know that eagles are the worst thing alive on earth and will drop everything they are doing to either hide or empty entire magazines into the air in the vain hope of escaping aquiline tyranny.

That’s not to say the gameplay is flawless, as there are some lingering nitpicks. There is a weapon sway mechanic that only seems to apply to longbows and sniper rifles. It can be minimized with a perk, but until it’s unlocked the best long range weapon in the early game is an M16 fitted with a marksman scope. There’s also few too many “easy buttons” in that too many problems can be solved with either a silenced sniper rifle or a gyrocopter/grenade launcher combo. It’s up to the player to push those buttons, but the game doesn’t really apply pressure to step outside these comfort zone other than a pair of plot missions.

FC4 features an extensive multiplayer component. The main campaign has a co-op mode that allows two friends to tackle all of Kyrat’s side missions and outposts, or mess around with gameplay elements. Co-op is always fun, however, mission progress is only counted toward the host player’s save, leaving friends stuck repeating those missions later. There is also a five on five PvP mode which is just sort of there being a generic multiplayer mode for those that might want it. It does come with a map editor that’s fun to play around with, though sifting through fan created maps for ones that pique particular interest can be difficult. 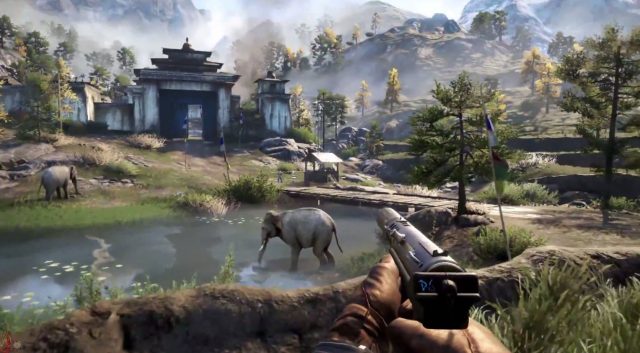 In terms of RPG elements, the game’s skill tree strikes a balance between the fixed progression of Blood Dragon and FC3‘s more complex trees. Improvements and new abilities are placed in short progression tracks, but there’s not a lot of rhyme or reason to the prerequisites. For example, a buff syringe only becomes available after a mission for a duo of drug dealing yogis and the elephant rider perk, because animal handling and performance enhancing drugs are related fields. In addition to XP, Ajay earns karma for dealing with local predators, random encounters, and certain collectibles that offer more perks and unlocks. It’s nice to have rewards but these could have just as easily fit into the existing reward structure.

Weapon customization is back, and basically identical to the previous game. Guns are grouped into three rough performance tiers, each being unlocked over the course of the game. The better the firearm, the more upgrades it supports, and the more players can tweak it to their hearts content. There are also more unique weapons sporting specific tuning beyond the regular customization options. These also tend have a bit of a sense of humour, such as the unique versions of the Mauser C96 and the Sterling L2A3 paying homage their use as props in Star Wars. Even with tiers, each gun does have something to offer and is gratifying to play with.

The game is very pretty close up, with lush vegetation and detailed character models, and gorgeous far away with scenic mountain ranges and looming fortresses. The middle distance, or anything moving quickly, has some issues with pop-in, tearing, and artifacting. There’s also some frame rate dips whenever a vehicle gets up to speed. This is for the PC version running on recommended specs with most settings on ‘high’. Speaking of PC setting oddities, this game features the option to adjust the field of view, but in the true spirit of Ubisoft’s two steps forward one step back stance on PC, it’s on an unlabelled slider, with no indication of whether it’s the vertical or horizontal or to what degree they are being adjusted. It’s an adventure in trial and error. The box also boast a new animal fur engine/technology/doodad. It looks awful; turn it off immediately. The real visual standout of FC4 is the colour palette. Teal and orange blowout in a few sections aside, the game moves from ice fields to deep jungle, to trippy spirit world, to ruins with a unique visual identity that still feels like cohesive whole.

And while players run around getting stuff done, there is of course all manner of noise, but there is not much depth to the sound. Footsteps come in only a few flavours, and there’s a fairly limited number of car-related effects, but the real killer is that all the various animals have only three sounds effects each. They’re all obvious stock sound effects, for that matter, anyone who has seen a movie or watched a cartoon in the past fifity years has heard this game’s elephant trumpeting and eagle cries a thousand times over. Musically the game fares much better, using a mix of Indian pop jams, Tibetan throat singing, and George Harrison-inflected guitar riffs to great effect. There aren’t any real stand out tracks, aside from The Clash, but an excellent mood mix for stealthing about and scheming to murder of the royal army.

Far Cry 4 takes the best bits of Far Cry 3, puts a new spin on them and drops its troubling racial politics and constrained mission design. The story and characters a bit more lightweight, but the core remains the same. Overall, this is a leaner, meaner Ubi-style open world experience and the best iteration on the franchise.