Obsidian Entertainment has a history of crafting follow-ups to games developed by other studios starting back in 2004 with Knights of the Old Republic II. 2010 has been a unique year for the development studio, as Obsidian not only released their first original IP but also brought out Fallout: New Vegas, the company’s first collaboration with Bethesda. Building on the engine of 2008’s Fallout 3, Obsidian has taken us away from D.C. and dropped us in the middle of the Mojave Desert for a whole new adventure. While the Fallout foundation is the same, Obsidian has definitely forged a unique experience with New Vegas.

Players take on the role of a courier who was attacked and shot in the head while in route with a delivery to the New Vegas Strip. Once recovered from the injury, the player is free to roam the desert wasteland in search of the attempted murderer/package thief. Much like Fallout 3, the world is wide open and gamers have the option to venture most anywhere, completing side quests or to continuing on the main path. There are numerous factions throughout the wasteland and how the player interacts with these people help shape the experience, because if one faction is angered they will attack on sight and will no longer interact civilly. Who the player aligns with will impact the path to the ending, so there is a lot of replayability for those who want to try different experiences. This is made especially convenient due to the fact that at a key point in the game certain factions are suddenly willing to forgive and forget out of the blue. This does cheapen the experience somewhat since a faction that hated the player before can now become a fast friend for little reason.

Thankfully, the most enjoyable part of New Vegas comes in exploring the world and finding all the other side quests and options that are available. While there is more here in terms of overall content than in Fallout 3 offered initially, the pieces of that content are typically shorter and often shallower. A big plus is that companions are expanded on quite a bit and even offer their own story quests in some form. There are also a lot of groups that have might little impact on the overall story, but play a small part and have interesting quest chains. So when the smaller parts are combined with the main narrative, the whole experience is extremely enjoyable, but just slightly subdued from the grand package offered by Fallout 3. 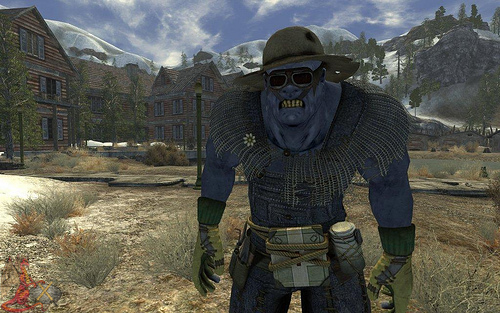 New Vegas maintains the first-person combat engine seen in Oblivion as well as the V.A.T.S. system added in Fallout 3. Players have loads of freedom when it comes to combat, as they can use assault weapons, rifles, fisticuffs, melee weapons, etc. The variety is plentiful as are the options for how to make use of these weapons. Melee combat is quick and easy to use in real-time, being more accurate than guns when up close, but when things get hectic, jumping into V.A.T.S. is effective to get the job done regardless of the weapon type being used. Weapons, armor, and items are all over the place in New Vegas, so players should never be short on supplies. Healing is also fairly easy this time around, mostly because stimpaks are readily available and super stimpaks are not extremely pricy.

Companions can also play a big role in battle. Players can have one humanoid as well as a non-humanoid character to help out and each companion offers their own style of combat. They can be given new weapons and armor which they will equip if it is better than their current equipment and players can also use these characters as a pack mule for excess equipment. Companions have a command wheel user interface where certain aspects can be customized, such as whether or not they are aggressive, how close they stand to the main character, and if they focus more on ranged or melee attacks. These helpers are very handy and offer a nice, user-friendly partner while traveling around the wasteland. Also, companions are only knocked unconscious when they run out of health during battle and revive once there are no more enemies around. Only in hardcore mode are companions actually killed. Thanks to these teammates, it doesn’t matter how chaotic combat gets, battles are much more fun with a friend.

All of the staples found originally in the Oblivion and Fallout 3 engine are still around. Players can quick travel to locations they have been to before and the map is updated whenever a new location is visited. The only exception in New Vegas is the Strip, where players can only quick travel to the gate, not to any of the inside areas, which is a slight annoyance. Quest markers are still available, making it easy to see where to go on the map in order to find the next objective. The SPECIAL stat system makes a return as well as perks and skills. Upon leveling up, players can assign points into skills such as guns, speech, barter, and survival. One change for New Vegas is the combining of all gun types into one single category, which is a welcome fix. Perks that are earned every other level are a mix of old and new ones from Fallout 3 and will give the player a unique skill to help personalize their character. 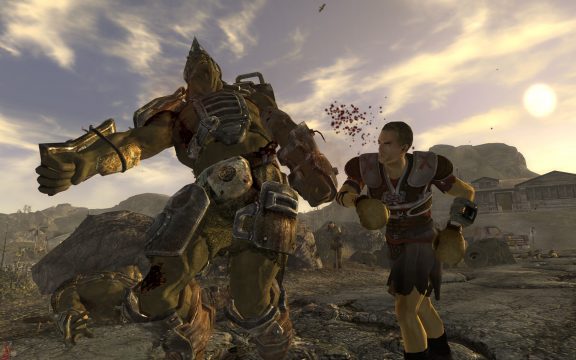 Ain’t that a punch in the head?

Visually, New Vegas artistically pulls off the wasteland quite well. The desert is dry and desolate, just like it should be, but the real highlight is the New Vegas Strip. Coming into sight of the well-lit Strip from out of the Mojave wastes is an impressive sight, especially at night. The downside in terms of graphics is the lack of polish for environments and characters. Characters look choppy and rigid and some of the buildings have issues with an odd graphical glare. Nothing’s too bad, but the game could stand to be smoother visually.

One area where the game is solid is the audio. The base soundtrack from Inon Zur is solid, though not nearly as pronounced as some of his prior work. The few noticeable pieces he offers are unique though. The radio is again the main star of Fallout with New Vegas Radio taking the highlight. Mr. New Vegas, voiced by Wayne Newton, is the on-air entertainment and he plays around a dozen classic songs including some from Dean Martin, Bing Crosby, and Nat King Cole as well as touting the player’s exploits through the land. While it might not seem like it at first, the songs are just as catchy this time around, though it might take a while to adjust for those who played a lot of Fallout 3. There are a couple other stations that play a mix of the New Vegas music along with older country songs. Sadly, there is little else in terms of musical variety, so nothing like classical violin is offered this time around. The voice work is top notch, too, with an all-star cast doing a solid job for all the main characters. Minor NPC dialogue is a little lazy, however, with lots of voice work being recycled throughout. Overall, the audio is great, so the lack of variety is forgivable.

While it seems like I’m in the minority, I had very few problems at all with Fallout: New Vegas. During my nearly thirty hours of play, the game only froze up on me twice near the end, but other than that I had no scripting errors, no enemies spawning inside walls, and only got stuck only once trying to scale a cliff that wasn’t designed to be climbed. I know that my experience might not be the typical one, but RPGamers should know that not everyone is doomed to a horrific time. Regardless, Fallout: New Vegas is a great experience. Offering a huge world with many sights to see and things to do, players will have a lot to do in the Mojave where the only bugs that should be feared are the wicked flying Cazadores.