An Exercise in Failing to Direct Your Own Destiny

The Expeditions series is back with Expeditions: Viking, a strategy RPG that takes place at the dawn of the Viking age. Players take the role of a clan chieftain and are faced with the choice to be conquerors, merchants, diplomats, or likely, and as circumstances often dictate, a mix of all three in their quest to ensure their clan’s survival. The politically-driven main story is full of conflict, intrigue, and ever-shifting alliances, while the generally realistic characters and motiviations are given just enough over-the-top exaggeration to make for a good story. It’s historical setting stands apart from the countless of fantasy worlds that players often experience, and the game accurately portrays the time period on which it’s based. Though technical shortcomings hold back the game a bit, it provides an engaging experience all the way through.

Viking begins with the death of the protagonist’s father, and his ascension to the throne as the new chieftain, or theign, of Skjern. Many politically important figures attend the feast held in his father’s honor, but not all are friends. This social gathering foreshadows much of how the game will unfold — with a variety of parties all vying for power and resources, and driven by their own goals and morals. The premise of Viking is relatively straightforward, but the way the story is conveyed provides great interest throughout the duration. Players must work to strengthen Skjern, weakened by his father’s neglect, and protect it from the ambitions of other local political figures. To do this they will venture to the British Isles to form alliances, trade, or plunder — and in many cases being no better toward the British than some of the local powers are toward Skjern.

Unlike many games that focus on idealistic views of good and evil, characters in Viking distinctly focus on the possible, bound by relationships and realities, and with each attempting to face their own struggles and find which path provides the best trade-offs between how things should be and how they can actually be. The best part of this is that the player is also put into exactly this situation. This approach really stands out in allowing players to truly relate with the protagonist’s struggles between helping his own clan and potentially harming others, and leaves them questioning their actions and decisions time and time again. The developers effectively impress the illusion of choice on players, offering them a multitude of decisions to express their intentions, but often foiling them with potentially undesired outcomes of their choices at every turn, providing a very effective juxtaposition between intentions and reality. This theme is executed exceptionally well through the outcomes of player choices, the game’s random event system, and the protagonist’s introspective dream sequences. The game also features many phenomenal side-stories of party members and NPCs that progress through uniquely designed side quests — such as the game’s interesting take on the RPG staple ‘Clear the Rats’ quest — often thrusting the player into difficult decisions and choices and actively engaging them in considering the consequences of their actions. These side quest play a critical role in immersing the player in the game’s wonderful characters and world through meaningful interactions and at times emotionally powerful developments between the protagonist and his close friends, such as supporting Ketil in learning about his past and helping Nefja care for her family. 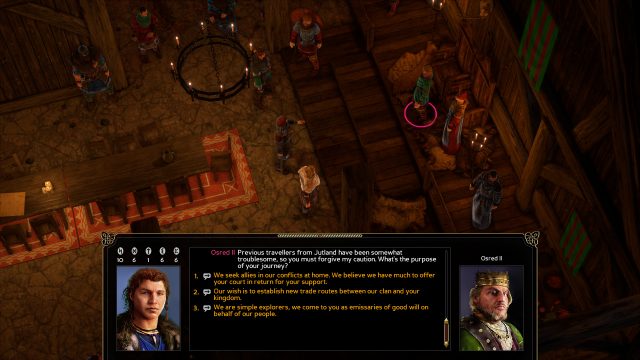 Are you sure that’s the choice you want to pick, knowing it will probably lead in exactly the opposite direction from where you intended to go?

Combat in Viking is a turn-based strategy affair on a hexagonal grid. Characters can specialize in any number of weapon and support skills, giving them access to ranged, melee, and status-based abilities. While abilities are simple, they are thoughtfully designed, with many that synergize well with each other and across skill trees. For example, a character that specializes in witchcraft can apply poison to an archer’s arrow, and the archer can then follow with an ability that shoots a barrage of arrows that hit and poison multiple enemies. Characters can move several hexes based on their mobility, and can opt to double their movement range in lieu of taking another combat action such as attacking or using an ability. They can also move and use abilities in any order. This becomes important for limiting enemy actions because characters get free and automatic attacks if adjacent enemies attempt to move or use certain actions such as healing or shooting a bow. For example a character with five movement spaces can opt to move two spaces, attack and kill an enemy, and then move another three spaces next to an enemy archer unit to prevent it from attacking on its next turn. The battle system appears deceptively simple, but there are many clever and creative ways to combine abilities, spatial positioning, and game mechanics to create some truly unique combat strategies. The one downside to combat is that there aren’t really many interestingly-designed encounters that require unique strategies, but developing and using them is no less fun because of it.

Outside of combat, gameplay mostly revolves around exploring to gather resources and upgrade Skjern, and solving story and side quests. Players can select locations on a simple world map, and a sprite representing the party will automatically move along predefined paths to the destination. There is also a novel take on party management and maintenance outside of combat. For example, while the players move on the world map, random events can occur such as finding items or characters becoming injured, and again here players are often given choices that lead to different outcomes. While traveling, game time will also pass, leading characters to become hungry and fatigued, which affects their morale and combat statistics. Dealing with hunger and fatigue can become a bit tedious, but does add to the realism of Viking struggle for which the game aims. The party can also set up camp in various pre-specified locations around the map where they can rest, cook, craft items, hunt, or a number of other activities. Camping can sometimes also trigger special events relating to the game’s story, side-quests, or party characters.

When players enter an area on the map, the view changes to a standard three-dimensional top-down view where players can click to move around, pick up items, and interact with NPCs. While the character models do look generally good, the game’s camera controls are very restrictive and don’t allow players to see character models head-on and up close. Environment graphics, while looking generally decent, aren’t anything to write home about, often reusing assets and lacking in variety, art direction, and detail. However, because the game takes place in a very small area of the world, the lack of variety doesn’t break immersion as much as it might in a game that spans a much larger setting. The game somewhat makes up for the average graphics and art with strong musical tracks of consistently high-quality that are suitable in highlighting the setting’s somber struggles as well as the battle- and glory-driven Viking culture. Like the graphics, the soundtrack’s lack of variety keeps it from being great as a whole, with most of the tracks covering the same few themes and moods. 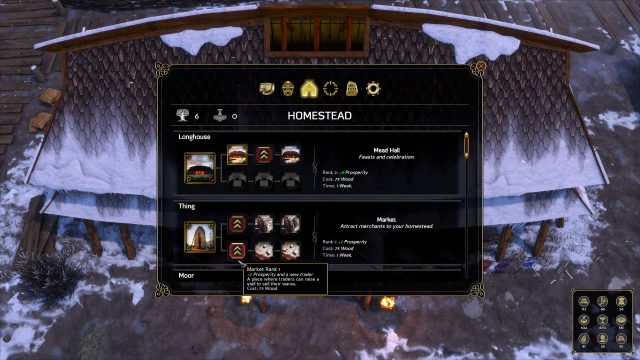 Choose upgrades to increase either your clan’s power or prosperity, but don’t make the mistake of focusing on both.

One of the biggest downsides of Viking is that new players may easily find themselves in a situation where they cannot reach the game’s winning conditions. Players are often faced with choices that will either increase their clan’s Power or Prosperity. Reaching 100 Power or 100 Prosperity makes a corresponding ‘winning’ ending available, but if players attempt to balance the two they may be unable to get either over the threshold, locking themselves into a ‘losing’ ending. This is not made clear to players from the get-go. The game is also timed in that certain story goals must be completed by a particular time in the game, which as mentioned earlier only passes when players are moving on the world map. However, some of these goals may take a few weeks of game-time to accomplish once started, and players who don’t think ahead about that may again find themselves unable to meet the game’s winning conditions. The developers initially saw failure conditions as one of the game’s valid endings, but have somewhat changed that tune by providing settings in the game’s configuration files to turn off the time limitations, partially alleviating some but not all of these issues.

Viking isn’t the most refined game, with limited camera control, repetitive graphics that lack detail, and a lack of high-production presentation. It nevertheless succeeds in immersing the player in its world through an intriguing main story focused on local politics and motivations and driven by realistic struggles and constraints. Viking effectively impresses upon the player its main themes about the illusion of choice and the binding chains of circumstance, and also offers a multitude of poignant side-stories and strong character development. To top it off, the game features a unique combination of combat mechanics and abilities that allow creativity and enable some very interesting and satisfying strategies, as well as a novel take in timed and deliberate progress and out-of-combat party maintenance. Players looking to take part in a realistic and historically-inspired world with an engaging politically-driven story should look past the game’s lack of technical polish and definitely pick up Expeditions: Viking.