Empyre: Lords of the Sea Gates is an indie strategy RPG with many fresh ideas. From its unique setting to the unorthodox mix of features in its real-time-with-pause combat system, the game is full of originality. Unfortunately, most of the original ideas either don’t work well or are in a very unfinished state. Coupled with a myriad of technical issues, many of which are game-breaking, Empyre just doesn’t feel like a finished game ready for consumers.

Empyre takes place in an alternate world in the early 1900s. This neo-Victorian version of New York is completely flooded by rising waters, and clean drinking water is scarce. The game begins when the water source to the city is completely shut off, and players set off on an adventure to find out why and restore it. The overall plot idea is unique and generally interesting, and manages to stay fresh with a handful of pivot points. This unfortunately can’t rescue the story as a whole. Many of the story events that take place along the way seem almost random and unconnected, and often make no sense. Both build-up to important events that impact characters and processing of events after the fact are totally missing from the story. Important events happen out of the blue, and characters readily accept these changes without any deliberation, making the resulting actions — including fights and story set-pieces — feel entirely unmotivated. Empyre has some good ideas for unique characters, but drowns players in nicknames and proper nouns to the point that they lose their mystique. Characters also come and go from the party seemingly at random and for no reason at all, making it hard for players to become attached to them. The dialogue is bland and mechanical, lacking necessary transitions. Overall, the game offers a storyboard more than it offers a fleshed out story.

Combat in Empyre is real-time-with-pause with a strategy twist. The game must be paused for commands to be issued. Commands can then be added to a queue of seemingly infinite length. When the game is unpaused, the queued actions will be performed by each character in real time. The action queue can also be canceled while the game is paused. While these ideas are interesting in theory, Empyre‘s developers fail to execute on them. A plethora of unintuitive design choices by the developers — such as automatically selecting characters who acquire status afflictions, or changing the mouse icon of a melee weapon to a ranged icon when a character is immobilized — make understanding combat frustrating. Due to a lack of combat abilities beyond attacking and moving, the queuing system offers little of value. Tweaking individual battle actions is tedious, as the queue cannot be easily adjusted once entered; actions must instead be individually canceled up to the point where any changes to the sequence need to be made. In addition, many status effects very frequently cancel the action queue, making queuing of actions practically useless. Movement in combat is also cumbersome. Because pathing is computed at the time of command input and doesn’t take into account future character positions, AI-selected paths are often strange and have to be repeatedly adjusted. Targeting can also be difficult, as enemies can step over unconscious ally units and the target selection system is not built to handle this, turning the use of revival items into a pixel-hunting game. With better encounters, an ability system, and smart use of the existing mechanics, combat could have been great. But like the story, combat in Empyre boils down to a set of big-picture ideas with no real follow-through. 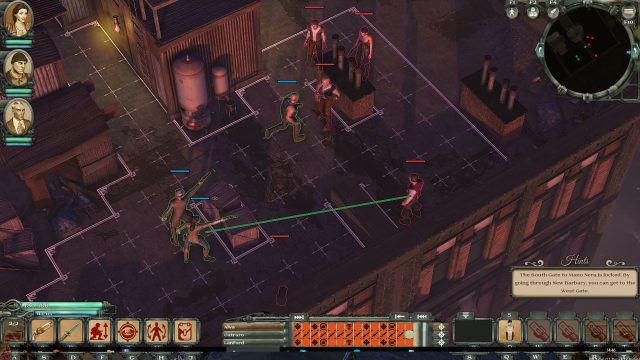 That carefully planned action queue is probably going to get canceled a quarter of the way through.

Control issues abound outside of combat as well. For example, players can’t rotate the camera, making navigating many areas needlessly difficult. There are a number of unopenable chests that are highlighted as if openable, confusing players. The AI won’t open doors automatically when moving from one area to another, forcing players to manually click on each door. The long list of control and interaction issues makes for a very clunky and unpolished experience. In addition, the game is full of bugs big and small, and because players can save anywhere, many of those bugs can become game-breaking if they don’t keep a large collection of separate save files. While the developers have patched some bugs, I still encountered a slew of them after the most recent patch, including three of the game-breaking type, preventing me from finishing the game’s final area.

Like everything else, progression is also an afterthought in Empyre. There is no ability system to speak of, with progression being made up mostly of improved statistics and passive perks. Instead, combat relies on expendable items that are found in limited quantities, and running out can lead to players being stuck in unwinnable situations. There are a handful of items with infinite usage, especially those for healing, but not much beyond that. The stats and perks that players can choose between typically lack a meaningful description about their effects, making it difficult for players to build effective characters. This can lead to characters who constantly miss with their available attacks — though because of the aforementioned coming and going of characters, players will get multiple chances to get at least some of the builds right. Equipment selection is also sparse, and those pieces that exist are bland and uninteresting. For some slots, players may not find any pieces throughout the entire game. 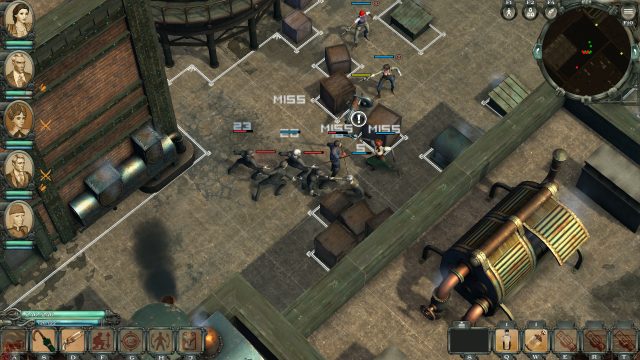 Sure, you’re fighting these guys, but there’s probably no reason as to why.

The graphics in Empyre come off as outdated. Character models are conceptually interesting, but visually they are overly smooth as if out of a low-budget PSX-era FMV. The game’s neo-Victorian aesthetic is fresh, combining elements of the early and mid 1990s with steampunk themes. Unfortunately, even at the highest settings, environment texture resolutions drop too steeply with increasing distance from the camera. Players are forced to choose between zooming in so close as to be unable to see much of their surroundings, or zooming out and dealing with visibly blurry textures in the environment. The music in Empyre has a unique jazzy feel to it and fits well within the visual themes. But once again Empyre is lacking here, most notably in that the music playing often doesn’t reflect the events occurring in-game. For example, upbeat background music may not change when sudden somber events occur, breaking all sense of immersion.

Perhaps the best overview of Empyre is as a collection of theoretically good ideas that were never fleshed out, with a storyboard rather than a story, and a hodgepodge of gameplay mechanics rather than a coherent set of fun game systems. And that’s unfortunate, because the game is full of unique and intriguing elements in its setting, overarching plot, and combat, and could have easily made for an excellent experience. But as is, it’s not much more than a buggy proof-of-concept in need of serious refinements and overhauls of all its core components.