Imagine a game that combines the aesthetics of Persona, the structure of Yakuza, and the button-mashing combat of a Musou game. That is probably the best way to describe Dusk Diver, an action RPG developed by JFi Games and JERA Game Studio set in the Ximending district of Taipei, Taiwan. It wouldn’t be wise to go into it expecting anything that will leave a lasting impression, but it is still a pleasantly enjoyable time.

Ordinary high school student Yumo is hanging out with her best friend in the shopping district of Ximending. Yumo gets pulled into an alternate dimension of the district known as Youshanding. Here, she develops the ability to fight monsters known as Chaos Beasts in addition to encountering supernatural beings calling themselves Kunlunians that take on human form to protect the mortal realm. With the help of the Kunlunian guardians Yumo meets along the way, including Leo, Bahet, and Le Viada, she uses her newly developed powers to prevent these monsters from spilling over into the human realm, which could spell disaster for the entire world, while working a summer job at the convenience store that serves as an HQ of sorts for the Kunlunians. Complications arise when the identity of the culprit responsible for the incidents is discovered and past events come to light.

Expectations for a compelling narrative are best left at the door as the story never develops into anything that’s particularly engaging. Plot developments are rushed through and poorly fleshed out, especially backstory that’s touched on but not explored in any detail. While Dusk Diver shares similar aesthetics to Persona, it lacks that aforementioned series’ thematic ambitions, instead focusing on platitudes about friendship and coming-of-age. A fun cast of characters could’ve livened things up though they unfortunately never really go beyond beyond basic character archetypes like Yumo being the cheerful high school girl, Leo the mentor figure, Bahet the guy in glasses who obsesses over fruit, and Le Viada the perky idol. The lack of depth in characterization and the skeletal plotting makes it hard to feel any emotional attachment. 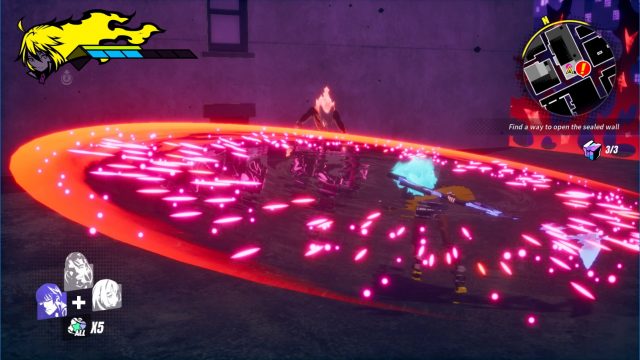 The game’s Musou-like combat is decent, if very repetitive.

It doesn’t help that the translation is lackluster at best, with stiff dialogue that falls flat in its frequent attempts at pathos and humor as well as awkward syntax and spelling errors littered throughout. The one positive that the story has going for it is that it doesn’t take itself too seriously and even shows a modicum of self-awareness at points, with one scene during the game’s final boss sequence having Yumo acting exasperated at a contrived plot occurrence and comparing it to something from a bad soap opera. The lack of pretense is what makes the narrative proceedings remotely tolerable.

While Dusk Diver has aesthetic similarities to Persona, the actual gameplay is more akin to a cross between the city district exploration of a Yakuza game, albeit on a much smaller scale, and stages that have the player participate in combat that’s not far removed from a Musou game. Both aspects on their own are fairly simplistic and wouldn’t be able to sustain the game on their own but are combined competently enough to create an experience that has a modest charm. The combat stages in Youshanding are mostly standard “kill all enemies” affairs with a few token attempts at variety such as a couple of platforming sections and a feeble stab at a teleportation maze that, while never overstaying their welcome, are never really something to look forward to either. Besides that, the level design is lacking in memorable landmarks, though the realm itself does give off an otherworldly vibe thanks to the use of color saturation.

These stages are, however, ultimately enjoyable thanks to the decent combat, with the core action controlling well and feeling solid across the board. There are typical light and strong attacks as well as summon attacks using the currently selected guardian. Each guardian has their own weapon, such as Leo’s short-ranged sword, Bahet’s wider-reaching scythe, and Le Viada’s guns. Mixing up these attacks and maintaining combos cause Chaos Beasts to drop more and more small orbs that refill HP, SP, and TP. The SP bar shows the amount of summon attacks available to use and refills as normal attacks are used and the TP gauge allows Yumo to transform into her D. Arms form, which makes her attacks more powerful. In this form, she can also use a powerful team attack with the currently selected guardian that deals a lot of damage to all enemies in range. Dodging an attack at the right time will activate the Just Dodge mechanic, which slows down all enemies on-screen for a few seconds, allowing Yumo to get some additional attacks in without worrying about taking damage. Once the effect wears off, she’ll have to wait for the cooldown timer to deplete before it can be used again. 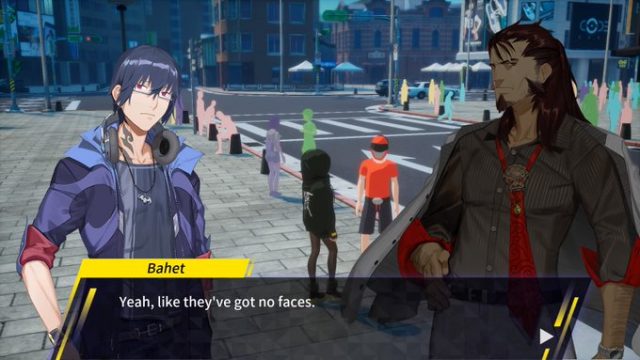 Bahet making an astute observation about the game’s NPCs.

Combat has just enough going for it to keep the button-mashing enjoyable for the relatively short duration of the game. However, it does start to feel quite repetitive later on as the player is forced to engage in battle with more and more waves of Chaos Beasts in order to progress. A lot of the stronger enemies have a shield gauge that must be reduced to zero to do any significant damage as Yumo is otherwise only capable of doing scratch damage to them. This becomes tedious when having to fight several of these enemies at a time, especially during the last couple stages of the game. Any experience with these kind of games makes the difficulty seem like a total cakewalk as even having to combat several of the tougher enemies at once involves battles of attrition more than anything else. Even bosses, while putting up more a fight, are overcome quite easily as long as recovery items are well-stocked. The camera does occasionally get stuck on level geometry in tightened spaces though this is more of a mild annoyance considering the general lack of challenge.

Once a player has reached the end of each stage, they are given skill points to level up Yumo and her guardians as well as points towards leveling up Yumo’s friendships with her guardians. Every time one of the guardians increases their friendship with Yumo, the player unlocks an optional event that provides them access to a special stage that unlocks a new attack for said guardian. The player is also graded at the end of each stage—main story and special ones alike—based on the amount of time it takes to finish it, earning specific items based on their performance. However, grading the player’s performance purely based on the amount of time it took to finish a stage, as opposed to how well they performed in combat, is counter-intuitive to the rest of the game’s design which isn’t designed around speed.

In-between combat stages, Yumo and her guardians work around the convenience store, eat all kinds of local dishes that provide them with stat benefits, and help the citizens of Ximending with their problems through sidequests. These range from dealing with a group of brothers and their lacking sense of direction to doing work for a chain of fruit drink stands and helping a shopkeeper’s daughter with her business. On occasion, these sidequests require having to deal with Chaos Beast activity in Youshanding. The writing for these optional diversions isn’t anything noteworthy and doesn’t come close to the best side stories of something like Yakuza. However, it does a serviceable job of giving Ximending something resembling character. Completing these sidequests allow Yumo to strengthen her D. Arms form. The player is also rewarded with photos of the characters hanging around together that do a better job of giving them characterization than the writing does. 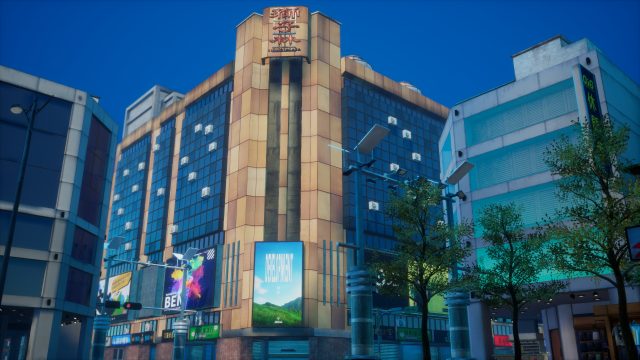 Ximending has a few pleasurable sights of its own.

Dusk Diver looks and sounds pretty good for the most part, with models for major characters being well-designed and animated. NPCs, on the other hand, lack detail and are portrayed as colored silhouettes past a certain distance though this is an effective stylistic choice. Exploring the small district of Ximending brings a few pleasing sights, and while Youshanding might suffer from mediocre level design, the color saturation gives it a supernatural air. Combat falls victim to the occasional bout of slowdown and texture pop-in rears its head when entering a new area. There is also a slight delay when opening the status menu and pressing through confirmation screens when entering and finishing levels but these bits of jank don’t take away from what the game does well. The music does a decent job accentuating both the calmer atmosphere of Ximending and the more intense combat sections with some catchy tunes, even if the music isn’t something that will be actively sought out outside of the game. The game can be played with Japanese or Chinese voice options, both of which are of serviceable quality.

Dusk Diver inevitably invites comparisons to both Persona and Yakuza. Yet this isn’t necessarily a bad thing, as while it doesn’t have the thematic aspirations of the former or the writing and attention to detail of the latter, the decent combat and low-key charm make it an overall pleasant experience that doesn’t overstay its welcome. Just keep in mind that it is very much cotton candy instead of a full-course meal.