Diving into the Familiar

Three years after the release of Dusk Diver, WANIN International’s Dusk Diver 2 arrives to expand the story of Yang Yumo. Now a college student, Yumo has to balance school, working at a convenience store, and fighting interdimensional beasts. Dusk Diver 2 fills up the player’s plate, with many systems and content to indulge in. Although it isn’t anything exquisite, there is nothing wrong with enjoying simple comfort food.

The story takes place one year after the events of Dusk Diver, where Yumo, Leo, Le Viada, and Bahet saved the human realm from interdimensional beings, with the team reuniting once again to save humanity from an unknown threat. However unraveling that mystery of the unknown takes too long to develop though, and tangible story developments don’t take place until well over halfway through the game. That slow start is frustrating, especially when each chapter uses the same plot device to halt narrative progress constantly just to keep the mystery going. In addition, new players to the series will particularly have a tough time with the story early on. Dusk Diver 2 is billed as a self-contained story, but there are too many references and jargon from the previous game that make things confusing for newcomers. It narratively doesn’t separate itself enough from its predecessor until the first few twists and reveals, which unfortunately don’t happen until the final few chapters of the game.

It’s not often that side dishes can outshine the main course, but that’s certainly the case here. There are plenty of collectibles, side quests, and companion quests for Yumo and the rest of the team, known as the Guardians of Kunlun. Together they do a great job of building a sense of community with the beautiful looking district of Taiwan, Ximending. As employees of a convenience store called Tumaz Mart, which is run by a round black bear doll called Boss, Yumo and the Guardians are tasked with delivering goods and helping neighboring markets with any tasks. Completing these errands rewards the player with currency, items, and equipment. 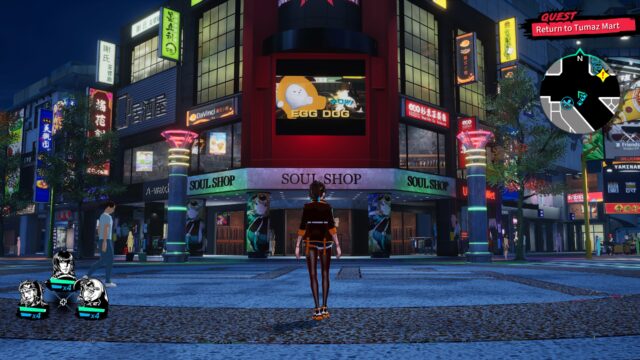 Yumo in the Ximending district

Companion quests are particularly worthwhile, letting players learn more about the supporting characters, including those who don’t fight by Yumo’s side. Rewards for these are fantastic too, as the player receives new skills to use in combat. The addicting side content does the heavy lifting for the lack of agency in the main narrative. While the interdimensional threat is the focus of the main story, the side content concerns Guardians belief that it is related to Hisperia, a large energy corporation that is aiming to buy out smaller markets in the area to build its project. The side quests build the relationship with the community and reveal the possible changes Hesperia’s project would make to it, while the main story works to save them from impending doom. It takes too long to figure out who is behind the conflict and their motivations, but the side content at least makes Ximending a community worth trying to save.

Whether players are completing side quests or advancing in the main story, they will spend the majority of the time in hack and slash combat. It’s a simple battle system to understand and master. That works to its favor, as the simplicity allows for experimentation with new skills, different combos, and makes it easier to adjust to each character’s unique fighting style. Yumo excels in close combat, Leo is a heavy hitter with slow and strong attacks, Le Viada wields firearms that are useful at long range, and Bahet utilizes aerial skills that are also good for crowd control.

Most characters are fun to use, with the exception of Le Viada, whose long range skills don’t work well for combos nor do as much damage compared to the rest of the party, so the wisest choice is to let the AI control Le Viada. The AI mostly does a great job, but Yumo takes considerably more damage than the rest of the party if it’s being controlled by the AI. Each character can be equipped with items, orbs, and skills that can be customized in a variety of ways. That variety can keep combat somewhat fresh, but there’s not enough variety when it comes to the skills themselves. Players can also eat meals to boost stats, but that can largely be ignored. 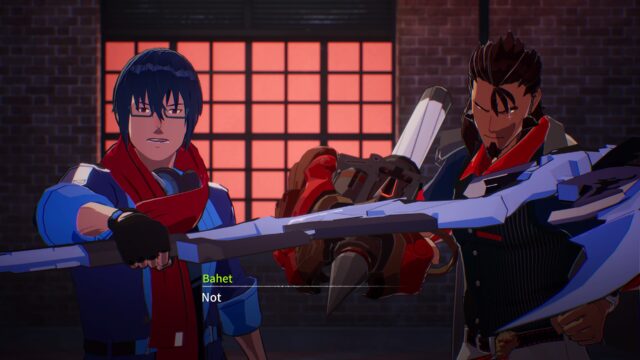 Bahet and Leo getting ready for battle.

Characters can be equipped with three SP Skills and one Signature Skill. SP Skills are powerful moves that can break enemy defenses faster, while Signature skills can be used to counterstrike certain enemy attacks. It’s fun to mix different skills together to find punishing combos and using skills successfully in combos is important, as it can lead to punishing Break Strikes. Performing long combos, while also using support attacks from other party members, and launching enemies into walls can force the enemy into a break state. When that happens the player can use Break Strike that causes massive damage. Working towards a Break Strike can keep combat engaging, but it’s the only mechanic that does.

Dusk Diver 2 spends the majority of its time in combat and the small quantity of skills doesn’t do enough to keep it fresh. It’s especially inconvenient because most of the skills can only be unlocked by upgrading each character’s weapon, which would be fine if the game allowed more upgrades each chapter. Combat was exponentially more fun in the last few chapters of the game and it’s puzzling why it took so long for that to happen. Dusk Diver 2 would also benefit from more enemy types. While there are different interdimensional beasts to fight, enemies can all be defeated in the same way, with the same combos and characters. In addition, all enemies are inflicted by status ailments in the same way and the game is missing a much-needed additional layer of strategy that would encourage further combat experimentation. At least the combat is not demanding of players. Only a handful of dungeons or boss battles prove to be a challenge, but that isn’t necessarily a bad thing here.

There are many collectibles littered throughout including Dusk Shards and clothing items that can alter characters’ appearances. They’re very easy to find through icons on the map, with the only obstacles being easily-dealt-with hordes of enemies. Searching for collectibles, or backtracking to collect any missed ones, can feel tedious at times, but never so much that it becomes a point of frustration. It comes down to the desire of the player to want to collect them, and for some will be an addicting aspect of the game. 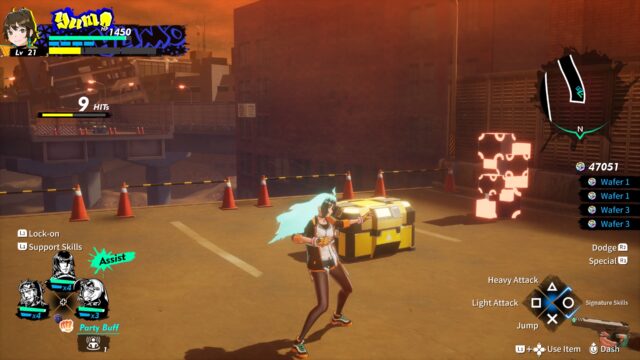 Doing that will have Yumo running all over Ximending district, which is a great way to explore all aspects of the area. It’s a good thing too because Ximending is beautiful to look at. There are digital billboards, shops with vibrant signs, food stands, and plenty more. The anime-inspired art style really pops in Dusk Diver 2’s settings and character designs, with the latter being a highlight. Ximending is also brought to life with plenty of people roaming around its streets. It’s unfortunate though that the same vibrant setting doesn’t work its way into the dungeon design. Dungeons often feel dull compared to the rest of the game. They are not only dull to look at, but there are very few puzzles or ways to interact with them. At least an excellent soundtrack helps to bring the game to life since it never misses a beat with what’s happening visually. There is a good mixture of adrenaline fueled electronic dance and high-octane rock, plus cheerful tracks for leisurely moments, and soft piano music for somber character moments. The soundtrack also leans into its anime inspiration with insert songs that play during important moments in the story.

One thing is clear, Dusk Diver 2 knows what it wants to be and does it pretty well. The hack and slash action combat is easy to learn and master, and side content is addictive to complete. Its anime inspiration lends to a vibrant world, great character design, and soundtrack fitting for any occasion. However, the most important parts of the game don’t pack enough of a punch. Combat doesn’t have enough variety, and the story meanders for too long before it gets interesting. What keeps the game moving is the many things for Yumo to do outside of battle, whether that be helping people or indulging in a nice meal. Dusk Diver 2 ultimately isn’t an indulgence, but something one might pick up when they want something comfortable and familiar.