Gaslamp Games is kicking down doors and taking names. This isn’t always the best strategy, but the enthusiasm is contagious. Doors can keep giant bugs from escaping; the names of the Great Old Ones are known to drive men mad. Dungeons of Dredmor is the first effort from these goggle-clad madmen. It’s a solid turn-based roguelike dungeon crawler that lampoons the genre without forgetting what makes it great — the mockery of regular bedtimes. Gamers who have problems quitting after “just one more room” are advised to temper their curiosity and visit Lord Dredmor in moderation. You’ll sleep easier, and it makes the bugs easier to handle.

Dungeons of Dredmor, like many roguelikes, isn’t big on plot. There’s a dungeon. Lord Dredmor’s at the bottom of it. He needs a good killing. Item descriptions and dungeon decorations hint at a larger setting, including the Bolt Council’s monopoly on ranged weapons and the ancient war between dwarven plastic-smiths and the elves. However, the real story-telling focus is on parody and gags. While the jokes and pop culture references are constant, they don’t beat the player over the head with their cleverness. There’s enough silliness throughout to create a weirdly memorable dungeon environment that doesn’t depend on fan service or mugging. The mix of genres in the dungeon design and character creation options make it easy to imagine the programmers slaving away over their steaming computers, tossing in anything that struck them as entertaining at the time.

Character creation consists of picking six skills from the thirty-three options. Realm of the Diggle Gods, the DLC expansion, adds six new skills. The June 5 free DLC, You Have to Name the Expansion provides four more. Overall, the skills range from the mundane (e.g. Axes, Alchemy, and Psionics) to the exotic (Emomancy, Piracy, and Archaeology.) Each skill has five or six levels, each of which provides a combination of stat boosts and new abilities. Practically all of the skills have situations where they shine, so there’s plenty of space to play around with character builds. Some skills work especially well together and certain builds are more efficient than others, but the dungeons support a variety of delving strategies. Trial, error, and a well-stocked wiki are the advanced dungeoneer’s friends on this journey. 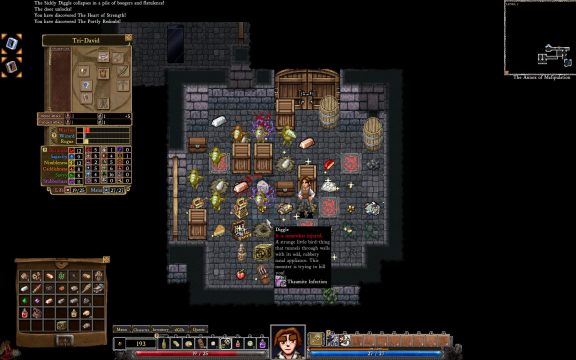 Those penguin doods are diggles, the game’s mascot race.

The randomly generated dungeons are sprawling. Each of the game’s ten floors (fifteen with the DLC) has a different theme, complete with special monsters, graphics, and room types. Adapting to the variety of traps, treasure, and other quirks of each floor make the early stages of exploration challenging without coming off as unfair. The range of loot that’s sprinkled liberally throughout the rooms is a great motivator. As with skills, selecting the right equipment is a more challenging task than finding it. At its heart, Dungeons of Dredmor is about inventory management. The limited number of inventory slots fill quickly. Is it more important to keep a hearty stock of crafting ingredients or gobs of potion-like fungus? Can you justify carrying more types of trick ammunition than the combined quivers of Green Arrow and Hawkeye when each type of crossbow bolt requires a precious slot?

Crafting is a familiar system with an annoying interface. Skills such as Tinkering and Wand Lore provide crafting levels. All item recipes require components, the proper tool, and a crafting level that reflects the item’s difficulty to create. Anyone with a portable still can turn grog and a pair of adventuring pants into pirate training breeches. Tinkering up a lightsaber energy mace is more challenging. Characters start with a collection of common recipes, but more powerful ones require hunting through randomly generated bookcases. Unlike many games with crafting systems, it’s not required in Dungeons of Dredmor. Having a steady supply of healing potions is never a burden, but other skills can cover for their lack. Similarly, homemade armor is convenient without outclassing random loot in every aspect. The worst part of the system is wading through the menus for the crafting tools and scrolling down to each recipe. The menus don’t layer like they look like they should, so crafting multi-step items requires inefficient navigation.

Of course, only a heartless robot would value efficiency over human experience. Gaslamp Games goes the extra mile in providing the personal touch. Unfortunately, unlike superior mechanical flesh, humans are fallible. The game receives frequent patches to address these man-failings. Thankfully, the patches also include content updates, which keep play fresh and surprising. The team at Gaslamp Games clearly cares about polishing these dungeons until they sparkle with blood. Many of these patches include material suggested by the game’s fans; the creators’ passion shows, a factor that many otherwise strong games seem to miss. Nevertheless, many of these patches wouldn’t have been necessary in the first place had the game been less buggy. The fatal, game-crashing bugs seem to have been ironed out at this point, but minor annoyances such as slowdown and improperly functioning abilities are not infrequent. The text scroll, which reports damage values, often builds a backlog. Waiting while the text catches up with an important attack takes time during busy situations, like cleaning out monster zoos. Worse, the game autosaves every five minutes or so, causing noticeable lag. While not technically a bug, an option to modify more settings would go a long way to improve usability. 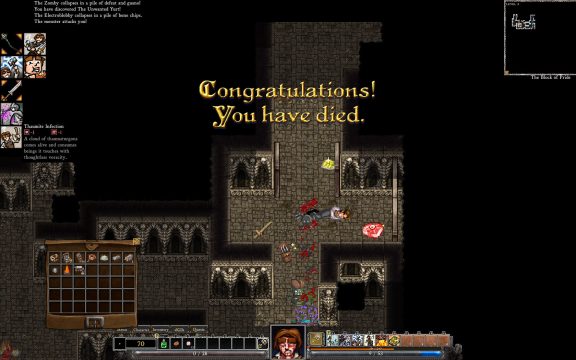 You won’t see this screen as often as in Nethack, but it’s a common one.

Despite the entertaining variety of treasure and room types, floors often overstay their welcome. The “No Time to Grind” mode compensates to some degree, but has its trade-offs: the dungeon is smaller and enemies provide more experience points, but there are fewer rooms to loot for gear. Adapting to the shift in balance is easier at the lower difficulty levels. Turn off the permadeath option and stick it on an iPad and you have a completely casual new experience.

The background music is pleasant and the sound effects are suitably overwrought. Accomplished delvers will become intimately familiar with both; a full trip through the dungeons takes long enough that their novelty will eventually fade. The cartoony graphics go a long way in defining the game’s unique atmosphere. Although palette swaps among monsters are frequent, the base designs are fresh and full of character.

The path to defeat Lord Dredmor is fraught with dangers, both intentional and unexpected. Mustache golems are one thing, but inconvenient menus? That’s a different kettle of slop entirely. Still, the dungeons are worth exploring. Roguelike diehards and thrifty gamers, take special note. Dungeons of Dredmor has your deathtraps and crunchy systems to decode, all for less than the price of a cheeseburger. If you can accept some mechanical quirks in exchange for a torrent of indie exuberance, check it out. Try some improbable builds (pirate-mathemagician-demonologist?) and stay out of the way of the diggles. They bite.