More of the Same Old, This Time with Four Players

With the release of Atari’s Dungeons & Dragons: Heroes for the Xbox comes yet another new-age hack-n-slash dungeon-crawler action RPG in the tradition of 1996’s release of Blizzard’s Diablo. There wasn’t any question from the beginning when the company set out to create this game that its goal was to capitalize on the success of Snowblind Studios’ Baldur’s Gate: Dark Alliance, and while it is certainly successful in achieving this objective, when all is said and done, there is still much to be desired.

D&D Heroes‘ battle system plays out entirely in real-time, and its focus is on swift, relentless combat. Obviously, this is an essential ingredient, given the nature of the game. While it’s certainly fast-paced, this kind of fighting can get repetitive fast. Fortunately, the game has an option for up to four player cooperative play, which helps to nullify some of the monotony of combat. In fact, this option is of such great importance that you might as well only buy the game if you have at least one partner with which to play it. 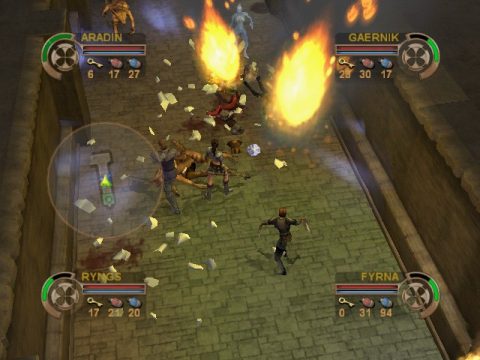 As far as battle mechanics are concerned, as its name implies, D&D Heroes derives its combat from the popular pen & paper system. However, as a real-time hack’n’slash title, a lot of what makes the D&D rules so great on paper is lost in the transition. Skills are, for the most part, rather similar, so it’s no suprise when you end up primarily using only one of the many feats offered throughout the entire game. With only four character classes to choose from, including a Warrior, Wizard, Cleric, and Rogue, there aren’t many chances for in-depth customization, and each character’s armory is severely limited.

The game’s interface could use a lot of work as well. As a primarily co-op game, the menu system is not built to be shared equally between four potential players. The game also sports an entirely rotatable camera which, while extremely useful for the lone adventurer, is not the most user-friendly tool among two to four simultaneous players. Purchasing items from merchants and talking to other characters can be an extreme chore, as nothing in the game (save menu-access and character actions) is button-activated; instead, players must walk onto the appropriate game tile in order to initiate conversation or start the next plot event.

As far as story is concerned, you might as well throw all hopes of an interesting plot line out the window, as any old Dungeon Master could have come up with D&D Heroes‘ story. The game follows the adventurer’s journey to defeat an evil wizard who has overrun a local castle. While there are a few twists and turns here and there, none of them are worth writing home over. Obviously the game was built on its battle engine, not its plot. 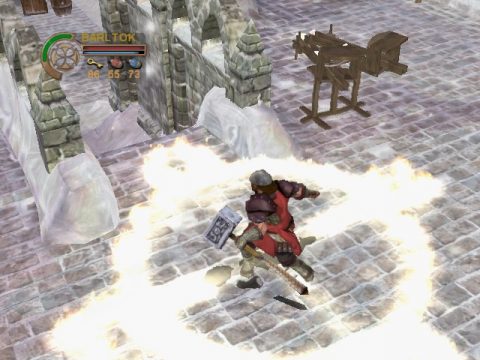 As mentioned in the opening of this review, D&D Heroes never set out to be the yellow rose bunched with a dozen other red roses. The game follows verbatim the rules set out by such games as the Diablo I & II, Dungeon Siege, and, of course, Baldur’s Gate: Dark Alliance. If you’re looking for an original experience, this is certainly the wrong game to be playing. To add to insult, D&D Heroes does nothing to forge the dungeon-crawler genre ahead in any direction, instead choosing to follow the same beaten path that every other new-age hack’n’slash RPG has followed.

D&D Heroes is packed with replay value; its multiplayer component alone makes it stand out as one of the few four player co-op games available on the market. A group of friends can get together anytime and play through this title easily in ten hours. Plus, there are varying difficulties to choose from to help make one playthrough slightly different from another.

The graphics engine gets the job done, and there are some interesting gameplay environments and character models, not to mention some rather impressive FMV. As far as music is concerned, I have heard much better soundtracks, and there are too many re-used pieces spread throughout the game. The sound effects are nothing to complain about: there are several instances of good use of sound in background noise and environment interaction.

Before D&D Heroes was released, many people were hoping for something more interesting or impressive to help forge along this addictive RPG sub-genre. Unfortunately, the game fails to do this, while still managing to at least produce the same tried and true appeal of its forefathers. It might be worth playing as a minimal distraction if you’ve got at least one friend with which to play it; otherwise, I’d suggest skipping it and waiting for more promising titles, such as Snowblind Studios’ Champions of Norrath: Realms of EverQuest or VU Games’ Baldur’s Gate: Dark Alliance II.