Back when the original version of Dragon Quest V was released in Japan the series wasn’t doing well outside its native country. Enix decided not to expend the resources necessary to give the game a localization, and it stayed out of North America even after receiving a PS2 remake. Its third incarnation on the DS proved to be the lucky one that saw a release elsewhere, and on a platform with other options for Dragon Quest this game is a definite winner. Dragon Quest V: Hand of the Heavenly Bride shows the growth of its protagonist through years of change, and demonstrates a few concepts that have surprisingly not been copied relentlessly by other JRPGs.

Dragon Quest V begins by showing the protagonist’s birth, then skipping ahead to when the baby has become a little boy. It is while still a child that omens of great import begin to circulate around this protagonist, but he still needs the help of his father Pankraz to overcome numerous challenges. The boy protagonist grows into a man while enslaved in the service of a cruel religious cult, but succeeds in escaping with the help of a few friends. Upon regaining freedom in the outside world the protagonist must attempt to locate the legendary hero who will save the world, but his personal life will not be frozen while doing so.

Dragon Quest V‘s overall plot is nothing new, involving an evil being threatening to take over the world. Its protagonist’s development on the other hand is something quite well done and captivating, taking him from childhood to fatherhood. The early stretches of the game are a bit quiet, but once the protagonist has a wife accompanying him the Talk option will produce plenty of conversations that are entertaining and develop their personalities. This method of giving extra depth to the characters becomes even more valuable once the protagonist’s children are in the party. Remaining mute in the Dragon Quest tradition actually serves the protagonist well, letting his family converse without adding interjections. 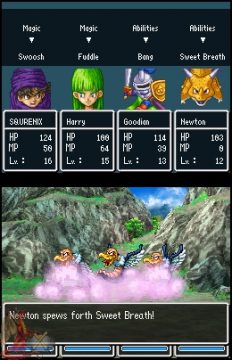 Newton, you idiot, stopping to smell the flowers does NOT mean eating them too!

They aren’t much for conversation, but the monsters of Dragon Quest V are frequently willing to accompany the protagonist on his journey. Sometimes a slain enemy will reappear at the end of battle to express interest in joining the party, and their abilities grow just like the human characters’. Monsters have unique equipment and skills that are quite helpful, and sifting through the many potential party members broadens the ranks of battle participants enormously.

Combat itself is functional and without any glaring flaws, but flows in pretty much the same way as other Dragon Quest games. The characters get into random battles and trade turn-based blows with a fair amount of uncertainty when it comes to having a reliable idea of how quickly actions will occur. Speed is its major asset, as clicking through options is rapidly done in order to dispatch the enemy with the greatest efficiency. Fights nevertheless display a marked lack of evolution in the series’ mechanics, without the class-changing mechanics that spurred interest in some of the other entries. Getting through the game is not particularly difficult given the trademark mechanic of simply losing half the gold on hand if defeated, and navigating the dungeons is often quicker than the designers expected in 1992 due to the top screen showing large chunks of the design.

In terms of inventory management this game is also nearly identical to other entries in the series, and mostly not for the better. Swapping items between characters takes longer than necessary, and the game cannot be bothered to say what the effects of usable equipment in battle are even after the player has observed them. Seeing what new purchases will do prior to buying them in shops is nice, but hardly enough to make up for how unnecessarily time-consuming inventory management is. 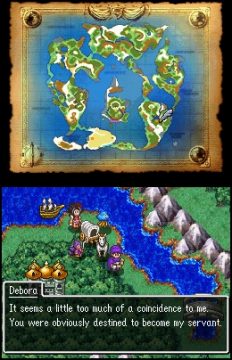 Even if the hero wasn’t mute, getting a word in edgewise around Debora would be hard.

The visuals of Dragon Quest V on DS are a considerable step above the early Super Famicom original. Battle animations of spells and monsters are fluid and snazzy, with the environments of the world at large also interesting to behold. The presentation may not challenge the DS hardware overly, but is quite pleasing to the eye. Koichi Sugiyama’s musical accompaniment offers a number of entertaining compositions, and the less arresting ones are at least workmanlike in their delivery.

This Dragon Quest won’t change the mind of anyone who despises the series. Certain mechanics that have deliberately been retained over the years feel archaic by now, and the need to get into a lot of fights could easily scare away many. That would be a shame, because Hand of the Heavenly Bride also shows how the Dragon Quest blueprint can be used to build a tale stretching across generations in a much more interesting way than Phantasy Star III. The Zenithian trilogy of Dragon Quest on DS is worth experiencing in its entirety, but this game is the single most charming of the bunch.